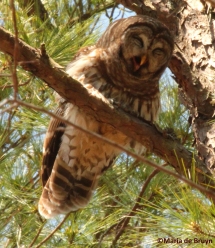 The owl is the wisest of all birds because the more it sees, the less it talks. – African Proverb

The world likes to have night-owls, that it may have matter for wonder. – German proverb

Sayings about wise owls are well known and may account for the names given to a group of owls – a wisdom, study or parliament. On the other hand, in some cultures, owls are associated with bad luck, death and the stealing of souls. Owl fossils date back as far as 58 million years ago! These appealing birds have been depicted in in cave paintings in France, in Egyptian hieroglyphics and in Mayan art. There are about 200 species of owls around the world and they are found on all continents except Antarctica and a few remote islands.

Owls have interesting anatomical features. Like humans, they have binocular vision as a result of their upright posture and forward-facing eyes. A circle of feathers around each eye, as seen in the barred owl  (Strix varia) here, can be adjusted to focus and channel sound to their ears (which are asymmetrical in many species!). These feathers can magnify sound as much as 10 times, giving them acute hearing. 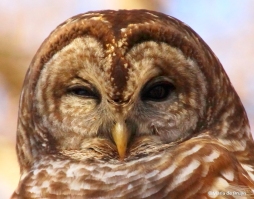 Like bald eagles, owls have three eyelids: one is used to blink, another for sleeping and the third – the nictitating membrane – helps them keep their eyes clean and healthy. Because they cannot turn their eyes within their bony eye sockets, owls must rotate their heads up to 270 degrees to look around. They are far-sighted and cannot see clearly right in front of their eyes, but their distance vision is very good, especially in low light.

Owl feathers have fringes with different degrees of softness, which helps muffle sound when they fly. 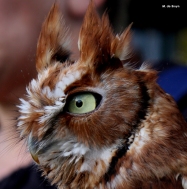 Some owls, like the Eastern screech owl (Megascops asio) have tufts of feathers on their heads; the function of these might be to indicate a bird’s mood, to show aggression or to help keep the bird camouflaged.

Screech owl rehabilitated by CLAWS that serves as an educational bird

Different owl species make different sounds for finding mates or announcing their presence to potential competitors. These sounds help ornithologists and birders locate and identify species.  For example, the barred owl is said to have a call that sounds like “who cooks for you?”

These carnivorous birds usually swallow their prey whole (depending on the size of the animals such as fish, mice, rats, hares). Scientists who study their diets use owl pellets as an aid; the owls regurgitate bones, scales and fur in these pellets. The larger owls will also detach body parts they don’t wish to eat. For example, colleagues speculated that it was a great horned owl (Bubo virginianus) that took down a red-tailed hawk (Buteo jamaicensis) at a local nature reserve recently, leaving behind an entire wing that wouldn’t have provided much nutrition. 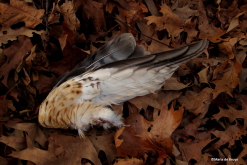 Great horned owl rehabilitated by CLAWS in Chapel Hill, NC. This bird was shot in the eye and cannot be released again; it serves as an educational bird.

The main threats to owl survival today include habitat loss, pesticides and human predation due to negative superstitions. There are fortunately efforts to preserve owls where they may be seen as beneficial. For example, a barn owl may eat up to 1000 mice each year, so that farmers try to attract them to help control rodents in agricultural fields. Projects to re-introduce barn owls (Tyto alba) are taking place in the Czech Republic and the United States. The local Audubon Society to which I belong has a barn owl project, in which they have placed barn owl nest boxes in various places in an effort to attract these birds as more permanent residents. It would be very cool to see the boxes occupied one day!

Check out CLAWS, a wildlife rescue and rehabilitation center in North Carolina! http://www.nc-claws.org/