Lately, many of my blogs have been about birds, mostly because they have been the easiest wildlife to photograph during the colder months. The mammals – and insects, reptiles and amphibians – have not been around much and likely have often visited when I’m not watching. I’m fairly certain that raccoons (Procyon lotor) and opossums (Didelphis virginiana) come to my yard after dark; perhaps the odd fox or coyote does as well. Nevertheless, after she stopped weaning her young and since summer ended, I haven’t seen Raquel raccoon all winter. 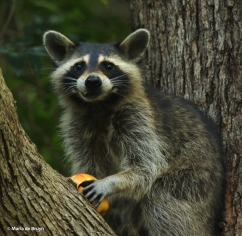 There a couple mammals, however, that I can count on to see every day because they have grown accustomed to having a food source at my house. Fallen bird seed (and seed and apples put out deliberately for ground feeders) does not get entirely gobbled up by the avian visitors, leaving pickings for the Eastern gray squirrels (Sciurus carolinensis), Eastern chipmunks (Tamias striatus) and white-tailed deer (Odocoileus virginianus).

The squirrels keep a watch from the trees and underbrush and appear very quickly after the bird seed is replenished. My combined squirrel and raccoon baffles – and placing the feeder poles at least 10 feet away from any structures from which they launch themselves onto the poles – have proved successful in keeping them from the feeders. But they continue to look for vantage points from which they can attempt a jump to the feeders.

Before I learned how to thwart them, they made off with plenty of seed and suet – one squirrel even carrying off the entire suet feeder when s/he couldn’t get it open. I saw it happening and chased that squirrel, but they were faster than me!

They will share space happily with birds but don’t always want to share with other squirrels or chipmunks. 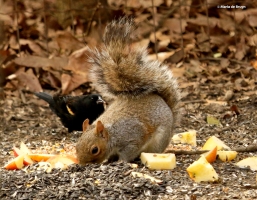 The chipmunks don’t let that selfish attitude deter them; they just keep a sharp eye out for when a squirrel might turn on them. They wolf down seed after seed, giving themselves a very fat-cheeked countenance!

The past few days, the squirrels have continued their chasing, but now it is not always in rivalry or play. Instead, their romantic side is showing and the merriment goes on for a good length of time. They appear to have designated a particular tree stump/snag in my back yard as their trysting spot. 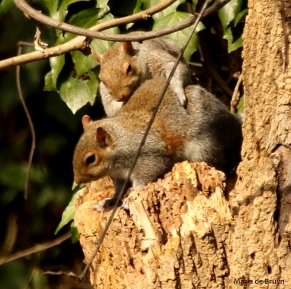 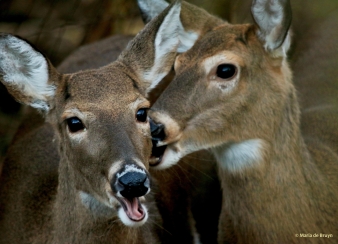 The white-tailed deer carry on their mating elsewhere but I know it’s happening as the males are evidence. Usually, one small family group comes to my home – mom, her one-year-old daughter and one-year-old son (a button buck, so-called for his tiny little antler nubs). They were occasionally accompanied by a couple second-year bucks with little antlers – I suspect mama’s sons from the previous year. 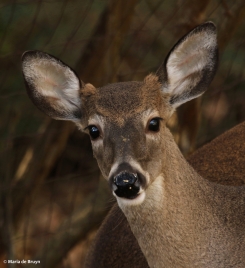 One of them lost one of his antlers early, but whether this was the result of a fight or accident is unknown to me. It seems that mama has allowed an orphaned button buck to join their group occasionally, too.

A couple weeks ago, two of the older males came down from the woods in search of does and food in the cold weather. This pair was traveling together but that didn’t stop some rivalry where first-access to the available food was concerned. 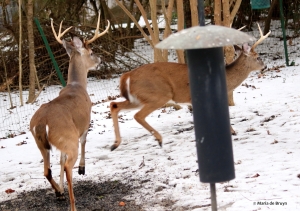 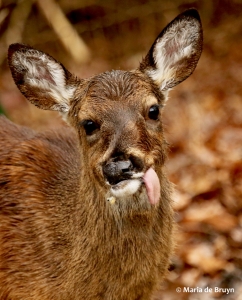 Then one day about a week ago when we had some very icy weather, I was surprised by a new and unfamiliar family group for a day. I didn’t mind them eating some seed and the resident family wasn’t around to chase them away. But then I felt immensely sad as I saw that one of them had been injured. Her tongue was lolling out but it was only when she came into the yard that I saw she must have been in an accident.

I felt miserable for her, seeing her face had been smashed in but after watching for a while, I realized the accident must have happened some time ago as she had no open wounds.

It must have been terribly painful though. I decided to call her Camelia as her profile reminded me of a camel. 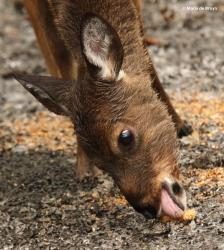 I put out some soft bread for her because I don’t know how easily she can eat. She does seem well-fed, however, so perhaps her disability is not hampering her nutritional intake. I haven’t seen her or her family again and don’t know if they will ever return, but it reminded me of how many deer are hurt and killed in accidents. I continue to think it would be worthwhile for research to continue on reducing deer populations through contraceptive use.

Outside my yard, I’ve been seeing many signs of beavers (Castor canadensis) in the parks and reserves I visit. Their teeth are strong and I recently learned why their teeth are reddish brown – the enamel contains iron!

They have left tree stumps, half-gnawed trees and detached trees that they have apparently not yet been able to drag over to their dams and dens. 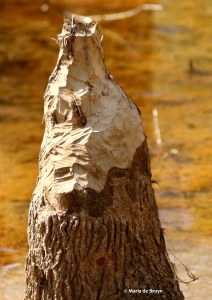 One downed tree in particular looked to me like they had been working on a bird sculpture! 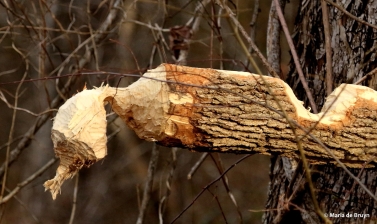 I’m guessing that some of the other animals will be coming out in the daytime soon around my home – at the very least, the frogs and rabbits, whom I have seen only very occasionally. Spring is coming and while I enjoy seasonal variety, I will welcome it with open arms!