Watching different species of birds build their nests in the spring can be quite entertaining, but the most amazing nests that I’ve been privileged to see can’t be found in my immediate environment — those of the sociable weaver birds (Philetairus socius geminus), which I encountered in Namibia. (Their architectural feats are rivaled by those of the bower birds, which I haven’t been able to see in person yet – maybe one day!).

The sociable weavers are birds native to Southern Africa, where stiff grasses grow that are a main component of their large communal nests. The males build these shared homes in trees and on telephone and utility poles; they are the largest nests built by any bird and can house more than 100 pairs of several generations. Some nests have been occupied for more than a century and may weigh several tons! 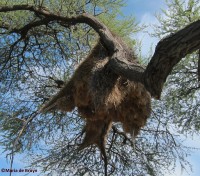 The nests are a technological marvel, highly structured and providing a more advantageous temperature inside compared to outside. The central chambers retain heat and are used for roosting at night. The birds use the outer rooms in the daytime to get some shade. The nesting chambers are lined from top to bottom with soft plant material, fur, cotton, and fluff, while sharp spikes of straw or twigs protect the entrances against predators such as Cape cobra snakes. Some birds appear to be caught, however.

The sociable weavers may not breed during periods of low rainfall and a considerable number (sometimes more than half) of the birds in a colony may not breed in a given season. Under typical conditions, sociable weaver birds raise up to four broods per breeding cycle, with nearly all pairs being assisted by helpers; for example, older birds may help care for younger siblings and unrelated hatchlings. Interestingly, other species of birds may also share these nests, including red-headed finches, rosy-faced lovebirds, pied barbets, familiar chats, ashy tits and pygmy falcons.

Among other types of weaver birds, the males also are the nest builders, hoping to attract females with beautifully constructed homes. They can use their strong, conical beaks and feet to actually tie knots in the grasses used to form the nests, making the nests sturdier.

The male sparrow weavers of Africa build “apartment-house” nests, in which numerous birds live in separate but neighboring flask-shaped homes that are entered through tubes at the bottom.

The buffalo weavers, on the other hand, make large stick nests that are untidy outside but may have spherical woven nests inside. 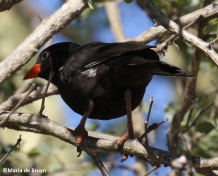 The bluebirds and robins here can make some nice-looking nests, but the weaver bird nests are among my real favorites!

Next blog: to be determined!