Continuing on from my last blog about the strikingly blue-colored dogbane beetles and ebony jewelwing damselflies, I’ll now focus on some other brightly colored insects – beetles and flies of metallic greens and reds. 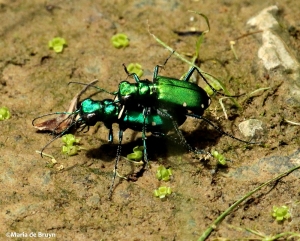 Their coloring extends all over their bodies, including their legs and heads, interrupted by six white spots marking the back edges of their wings and by large white mandibles (jaw bones). 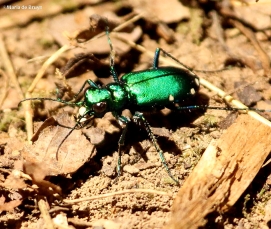 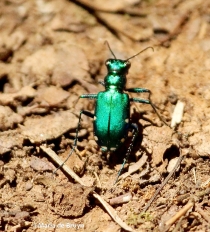 These fairly long-lived beetles (up to 5 years) look a bit fierce with those large jaws and they do bite, but they don’t go after people, unless perhaps you tried to handle them and they get pissed off. They are pretty quick runners and fliers, though. Their prey includes ants, spiders, caterpillars and other insects. 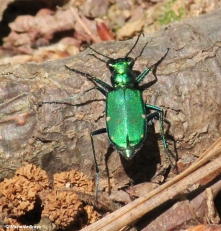 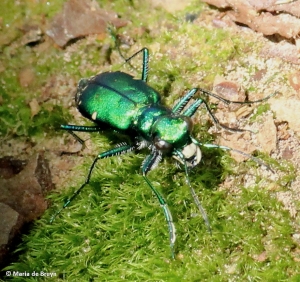 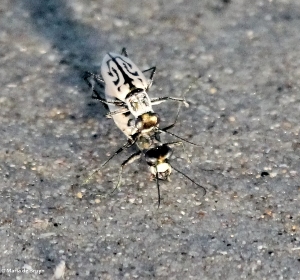 They have a beautiful cousin at the North Carolina beaches, the Southern white beach tiger beetle (Cicindela dorsalis media). Though not a shiny insect, they look as if they are made of ivory with an inlaid ebony pattern. Early September seems to be mating time for these insects; when I took this photo, there were many dozens of pairs going at it all over the beach. In some cases, the females were trying to shake off the males, who were hanging on rather desperately. 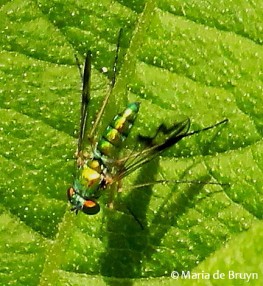 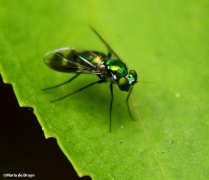 These tiny fliers tend to have long legs and prominent eyes. Some have clear wings, while others have a pattern, such as this one with black on its wings. 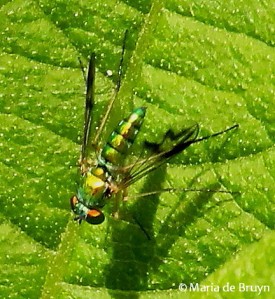 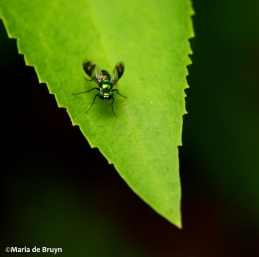 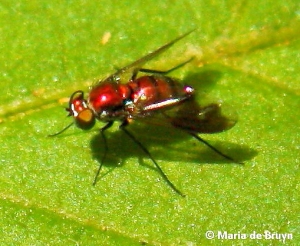 There are some red long-legged flies, too. This type of fly eats other insects, including aphids.

Without a macro lens for my camera, it is a challenge to get good shots of the metallic-looking insects. But one day, I hope to get a more decent shot of this mottled tortoise beetle (Deloyala guttata) that looks like someone put gold leaf on its back! 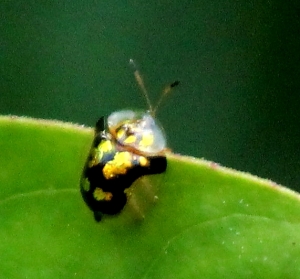 Next blog – an example of my difficulties with “serious birding”!

4 thoughts on “Green and red (and gold) insect jewels”