One bird that seems to almost universally delight people and bring smiles to their days are the hummingbirds. These wonderful little fliers now only live in the Western hemisphere of our earth, but two 30-million-year-old hummingbird fossils were discovered in Germany so they did live elsewhere.

There are more than 300 species – some very, very colorful and some with gorgeous long tails or long curved beaks. Central and South America have spectacular species and one of the Nazca line drawings in Peru depicts a hummingbird. Only eight species breed in the United States.

Here in Chapel Hill, I’ve had the pleasure to see two species – the ruby-throated hummingbird (Archilochus colubris) and the rufous hummingbird (Selasphorus rufus). The ruby-throated (named for the male’s brilliant neck feathers) are here in spring, summer and fall and then they migrate further south, crossing the 500 miles (800 km) of the Gulf of Mexico in one non-stop flight! 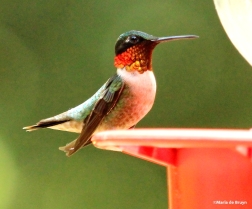 The rufous species migrates here from further up north in the wintertime; they will go as far as Alaska to spend the winter and can tolerate below freezing temperatures.

They flap their little wings about 50 times per second but increase this to as much as 200 wing beats per second. This rapid motion makes a humming sound, which varies according to the species. Their quick flight allows them to hover as well as fly backwards and upside down. 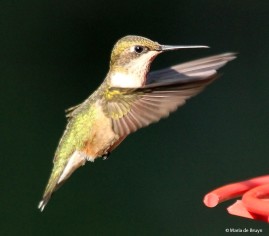 Their little feet help them perch but they cannot hop or walk on them.

These little birds need to eat about half their weight in sugar every day, which is why you see them returning to feeders quite often. When there is not enough food, they can go into a hibernation-like state, slowing their metabolism to 1/15th of its normal rate.

Their hearts can beat as quickly as 1260 beats per minute and they take 250 breaths per minute, even when they are sitting still! 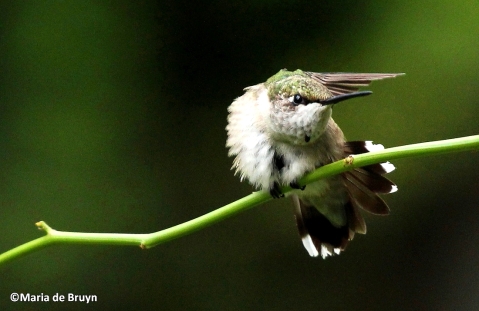 heir tongues, which have tubes running down their lengths.

To ensure they have enough food, they can sometimes defend their feeding areas vigorously against other hummers that they consider intruders. This happens a lot at my feeders but they are so fast that it’s very difficult to get good shots of it.

They eventually will tolerate others in their vicinity (sometimes). They live 3-12 years and perhaps the ones they don’t mind having around are related. 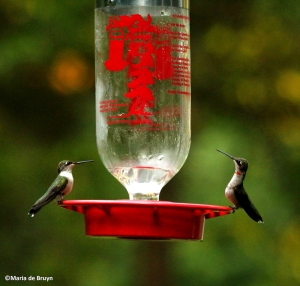 It is better not to put food dyes into nectar and brown or raw sugar should not be used to prepare it as these types of sugar contain iron, which can kill hummingbirds if they get too much over a certain period of time. They like sugar water with 25% sugar, although apparently nectar with 35% sugar is even more to their liking. 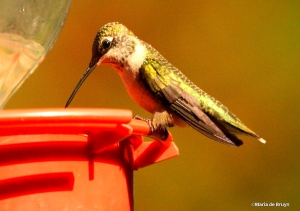 I have yet to find a hummingbird nest made with spider silk and lichens in my yard but hope to see one in the future so that I can say I’ve not only seen the biggest bird egg (ostrich) but also the smallest!

1 thought on “Delight in small packages”