Several weeks ago, in honor of Juneteenth, the local Triangle Land Conservancy partnered with the Stagville Foundation to inform people about the remnants of a former plantation and its surrounding meadows and forest. I attended and was indeed educated and enlightened about the local history and excited by the local wildlife.

Juneteenth (June 19th) is the oldest celebration commemorating the end of slavery in the United States. “Historic Stagville” was once the largest plantation in the state of North Carolina. The almost 30,000 acres were tended by some 900 slaves, most of whom lived in family groups as the plantation owner families tended not to sell the laborers they “owned”. 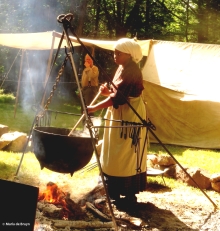 Local volunteers were dressed in period costume and demonstrated Southern cooking as they prepared a one-pot (non-vegetarian) meal for visitors and a more sumptuous traditional dinner to be served to all the volunteers at the end of the festivities. 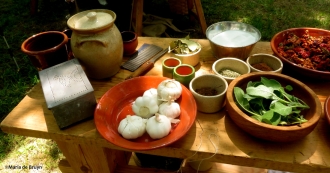 They cooked over open fires and explained which local vegetables they were using to prepare the dishes.

Meanwhile, other volunteers gave us some history about Stagville as we visited the Great Barn, one of the multifamily houses built for slaves and another home constructed by freed slaves who became sharecroppers after the US Civil War ended. The structures were produced by the slaves, who included a number of skilled craftsmen.

The 3-story Great Barn was the largest structure of its kind when it was built in the space of five months in 1860, housing some farming tools and equipment but primarily serving as an enclosure for 75 mules.

The houses for the slave families were well built with wooden floors and fireplaces. This was not benevolence on the part of the plantation owners but done from an economic perspective – it would cost less to have the workers housed a bit decently rather than to have to pay medical bills to keep them healthy enough for labor.

A couple slaves were freed before emancipation and a very few escaped. In North Carolina, some slaves were taught to read and write and letters written by two individuals who left Stagville provide some written history about the conditions there. Today, some descendants of freed Stagville slaves still live in this area. 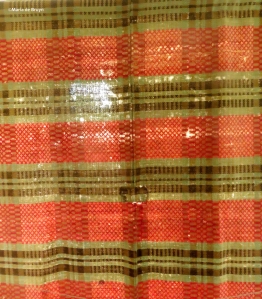 After the tour of the remaining buildings and seeing two quilts on display in the sharecropper home open to the public, I joined a few others for a walk through the surrounding forest. We came across the skull of a white-tailed deer (Odocoileus virginianus) with an odd shape – the Conservancy tour guide explained that the top of the deer’s head had been sawed off so a hunter could take home its antlers. 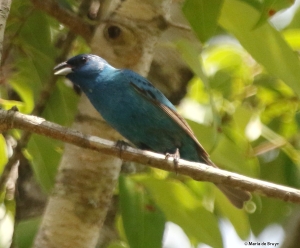 After the walk, I went on to the Horton Grove Nature Preserve, up the road from Stagville. The walking and hiking trails are all named after slave families that lived on the plantation.  For example, the Justice trail commemorates a family that included a man who was interviewed for a slave narrative project in 1937. I saw some indigo buntings (Passerina cyanea), who sang loudly, a couple red-eyed vireos (Vireo olivaceus) who were collecting nest materials, and a male common yellowthroat (Geothlypis trichas) who was having a meal. 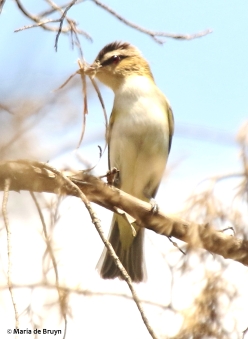 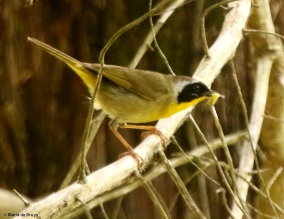 Some great spangled fritillary butterflies (Speyeria cybele) were very busy feeding in a part of the meadow that was crowded with common milkweed flowers (Asclepias syriaca) in full bloom. 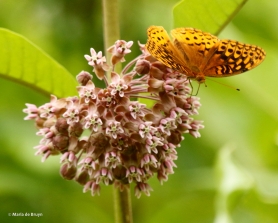 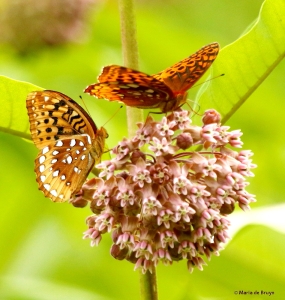 The dogbane beetles (Chrysochus auratus) were numerous and looking for mates as they trundled around on the dogbane plants (Apoynum cannabinum).

The morning ended with a brief glimpse of a male summer tanager (Piranga rubra) in the distance, a bright note to end the outing.

Unfortunately, recent events in Charleston have emphasized once again that the racism underlying the system that created Stagville still exists and still leads to violence against non-Caucasian people. This blog does not intend to imply that the Stagville plantation and its heritage contribute to making my world more beautiful – what IS beautiful is the way in which the Stagville Foundation volunteers work to inform and educate others about the history that affects our current society.

We must all continue to address the aberrations of hatred and discrimination based on race (and other culturally assigned characteristics such as gender and ethnicity) and work to educate ourselves, our fellow adults and young people on the need to simply treat everyone as we personally wish to be treated — we are all part of the human race and no other “races” (should) matter.

5 thoughts on “Juneteenth, historic Stagville and wildlife at Horton Grove”