On a sunny afternoon in mid-April, volunteers at the North Carolina Botanical Garden (NCBG) had the chance to learn about Bill Hunt, a horticultural expert who donated hundreds of acres of land for environmental conservation to the University of North Carolina. Hunt’s work laid the foundations for the expansion of the Garden with the Hunt Arboretum and the Piedmont Nature Trails in woods behind the cultivated gardens. The trails were “re-dedicated” during a walk to commemorate the Garden’s first public offering, which was originally dedicated on 10 April 1966. A walk in the woods was quite a nice way to help celebrate the NCBG’s 50th birthday. 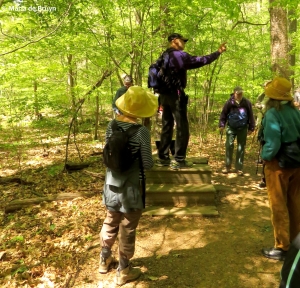 We learned about how the Nature Trails were created and maintained from Ken Moore, retired assistant director of the NCBG and the Garden’s first employee.

Moore was accompanied by other Garden staff who offered other interesting tidbits of information. For example, Johnny Randall, NCBG Director of Conservation, told us about how Mr. Hunt visited his rhododendron bushes along Morgan Creek and invited friends to swim at Elephant Rock and to forest picnics at his personal grill located creekside, all the while wearing a suit and tie in his beloved woods. 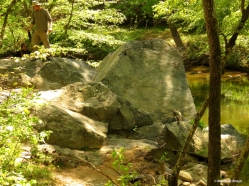 Staff pointed out some of the lovely native plants seen in the springtime woods, including plants that were rescued from other sites such as the trilliums. 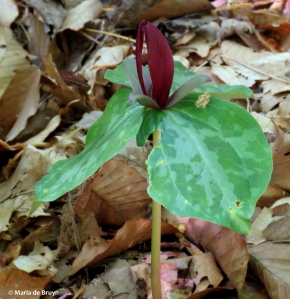 The woodsorrels have three-lobed, clover-like leaves. 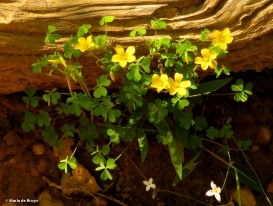 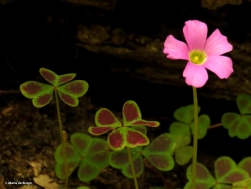 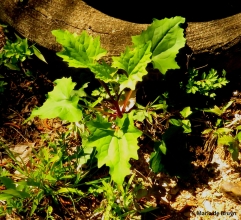 We also heard about the non-native and invasive plants that were planted along the Nature Trails before conservationists were aware of how they out-competed native plants for space and nutrients. They pointed out that we should remove such vegetation during our volunteer hours and from our own gardens at home, such as Oriental false hawksbeard (Youngia japonica (L.)), which I realized is nestling in in my yard, too.

Special attention was given to the plant with the delightful name of Italian lords-and-ladies (Arum italicum). There were many clumps of these large-leaved flowers and numerous specimens were blooming. While Ken told us how to identify male and female plants so we could eradicate them, other staff demonstrated how to uproot them with gusto.

As we climbed out of the woods after a couple hours, some last words were said about invasive plants and then Ken sped ahead to greet everyone as we re-entered the demonstration gardens. He kindly offered participants a small booklet about Bill Hunt’s life, a nice gift to commemorate 50 years of the Garden. It will be interesting to think about what the next 50 years might bring.