Although I find mushrooms interesting, they honestly are not especially favorite members of the plant kingdom for me. However, they do attract my attention when they are unusual or unusually abundant after rainfall. And I do find them a tasty addition to a meal for sure. So when the non-profit Friends of Bolin Creek sent out an invitation for a mushroom walk, it seemed like a nice way to take an outdoor break from my numerous tasks and chores.

I was hoping to see a lion’s mane mushroom (Hericium erinaceus) on the walk – mushroom enthusiast friends had recommended this one to me and I happened to have purchased one from a fungus grower at the farmers’ market the previous day.

The walk was organized by the Association’s nature walk coordinator, Salli Benedict, and led by Van Cotter, a retired mycologist and volunteer with the University of North Carolina’s Herbarium in Chapel Hill. He still mentors students involved with environmental studies and our group included several students who were intent on adding to their collection of 25 species for a class assignment. So, the walk participants included people of various ages and degrees of fungal knowledge.*

We divided into two sub-groups and our group set off into the woods. Our first spotting was a Suillis mushroom. This type is associated with pine trees and we did indeed find three growing at the base of a tree. A mycologist in our group pointed out the veil, a membranous tissue covering the cap, and she cut it length-wise so we could see the inside. These mushrooms are also called butter mushrooms.

As we walked on, we came across a few species of fungi growing on fallen and rotting logs. A few were polypores, which are mushrooms with pores or tubes on the underside of the cap. Some of them were shelf or bracket mushrooms. 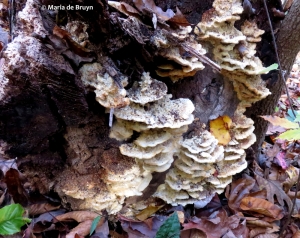 Some species look as if they have a maze of tubes underneath the fruiting body. The polypores are important in furthering wood decay, which in turn is important for cycling of nutrients and production of carbon dioxide in forests. 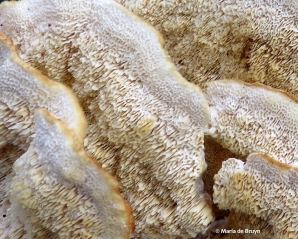 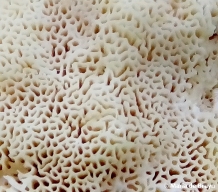 The tiny Mycena mushrooms have conical caps with gills and fragile thin stems. Some species are edible, but others contain toxins. 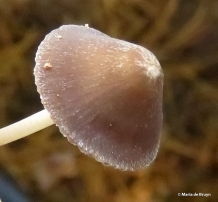 The Lactarius mushrooms, known as milk-caps, release a milky substance when the cap is cut or damaged. The undersides of the caps are gilled. 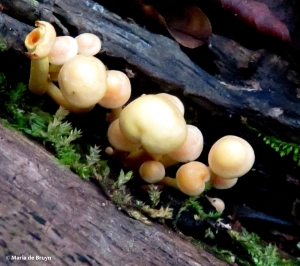 Armillaria fungi are also known as honey fungus; these mushrooms grow on rotting wood in clusters and can eventually become quite large. In fact, it is thought by some that an Armillaria in Oregon’s Malheur National Forest is the largest living organism on earth – it now covers about 2470 acres and may be about 8650 years old!

When I spotted these brightly colored Pholiota mushrooms, they were greeted with enthusiasm both by the non-mycologists and the student collectors. They only took a few and left the rest for other walkers to admire.

When we returned to our starting point, the two sub-groups laid out all their specimens and Van told us interesting facts about them. The Lepiota mushrooms are often poisonous. Because edible and poisonous mushrooms can look very similar, people without in-depth knowledge of fungi should not eat mushrooms they find growing outside. In North Carolina, for example, only about 200 of the more than 3000 identified mushrooms are common edible ones.

Few people die from eating poisonous mushrooms (7 deaths were reported in 2012), but people are hospitalized because they don’t recognize unsafe species. Some mushrooms need to be prepared for consumption in a special way to make them safe; some should not be consumed while drinking alcohol and some individuals may have personal problems with particular species.

Van also pointed out that mycologists use spore prints in identifying fungal species. The color of spore prints is particularly important. 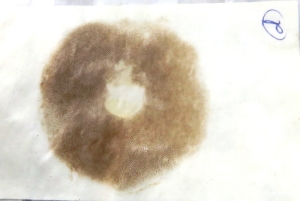 When I returned home, I prepared the lion’s mane as recommended by those who eat them regularly (sautéing or grilling; I sautéd it). It was with great anticipation that I took my first bite, remembering how much I loved oyster mushrooms when I first tried those. Sad to say, I found the lion’s mane bland and rather tasteless, but at least I had tried it. And I did have an enjoyable time on the mushroom walk, thanks to Friends of Bolin Creek!

** Thanks to Salli Benedict for providing the group photo!