As tiny snowflakes fall gently from the sky, my thoughts have left Costa Rica for a bit and turned to the weird weather we’ve been having in North Carolina. I didn’t move to this state for its weather but in the time I’ve been here, I’ve grown to appreciate the climate – we have four seasons but the winters have not seemed overly long and the spring and autumn temperatures are often fabulous. 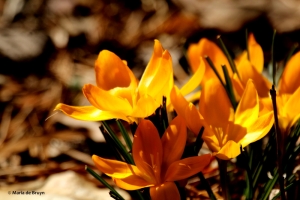 This year, much of February was unseasonably warm in our Piedmont area and people, as well as plants and animals, were enjoying the warm sun and mild temperatures. Crocuses and irises poked their blooms up a bit early and birds were checking out nest boxes.

Butterflies, like this question mark (Polygonia interrogationis) made an appearance (it was getting sustenance from some dog poop left on a bridge!) and Carolina anoles (Anolis carolinensis) emerged to sun in the warmth. 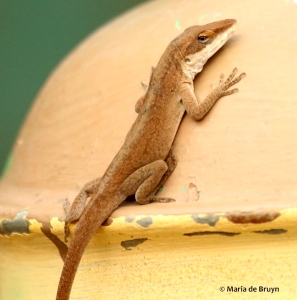 Then on 12 March, we had a day of snow. The male Northern cardinal (Cardinalis cardinalis) and Carolina wren (Thryothorus ludovicianus) sat amid the flakes between trips to the feeders. 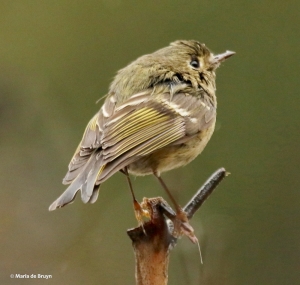 The female ruby-crowned kinglet (Regulus calendula) didn’t seem too perturbed, but the male resident was not happy – his bedraggled red crown was in evidence, both when chasing her away from the feeders and when he was just coping with the wet snow. 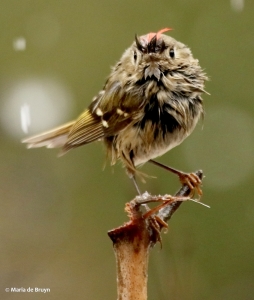 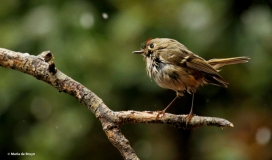 When I left for my Costa Rican rambles, it looked like the spring weather might give way to colder temperatures; when I returned 10 days later, it was definitely more winter-like. Then, this past weekend, we had a brief respite. Despite a cold morning start, friend Karla and I visited the Guilford County Farm. The farm personnel had marked off a section of the gravel parking lot where killdeer (Charadrius vociferus) had placed a nest with four eggs. When the babies hatch, they can walk away from the nest as soon as their downy feathers dry.

They won’t be able to fly until about 25 days later, but they can feed themselves. The parents will continue tending to and defending them, however. In the meantime, the parents do not come near the nest so as not to draw attention to it and they will try to lead any potential predators away with a broken wing display. They do fly near the nest often, however, and keep an eye on it in between their own feeding sessions. 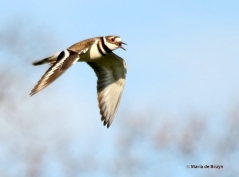 Karla quickly spotted Wilson’s snipes (Gallinago delicata) flying over the pond and settling at the water’s edge. As we drew closer, we could spot them occasionally, but they blended really well with the vegetation. Below are a couple photos taken at a fair distance with a high ISO and lots of grain – but you can try to see if you can spot the six snipes in the first photo and the two in the second.

Fortunately, one flew in a bit later and I got a couple more recognizable photos! 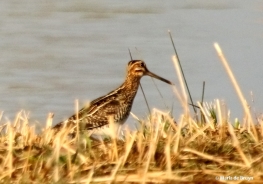 Some Canada geese (Branta canadensis) flew in and headed for the same corner of the pond. 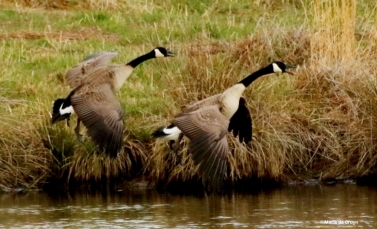 Then, as I was trying to find the snipe in the grass again, I noticed a killdeer looking for insects nearby.

She was accompanied by a male, who at first seemed to be preening but who was actually trying to impress her with some courtship displays.

The males will show off their feathers for their (potential) mates, especially raising and displaying their bright tail feathers as a fan.

The female would walk away and he would eventually move closer in an attempt to get a response.

Nearby, we saw three Northern mockingbirds (Mimus polyglottos), two of whom seemed to be males battling over a female. Their dispute was very vigorous and lasted quite a long time. In fact, when they flew away, they were still going after one another! 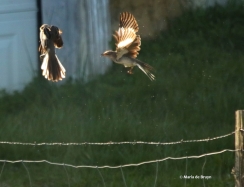 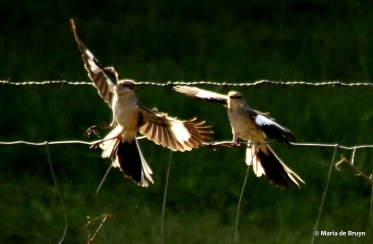 During our continuing walk in the fields and woods near the farm, we saw many other bird species including Eastern meadowlarks, brown creepers, woodpeckers and a pair of kestrels. The woods were kind of strange in that there were very few bird nests visible in the bare trees and also no Eastern gray squirrel nests – in fact, we did not see one squirrel the entire time we were there, which was very odd. An adorable baby donkey (Equus asinus) did greet us as we walked by, though, and our long excursion (about 6 hours) gave us a nice taste of spring. Hopefully, when the snow flurries today end, we will see spring weather come back quickly and be able to enjoy the flora and fauna of this season again. Next blog – back to Costa Rica!

10 thoughts on “Signs of spring in an uncertain season”