Not long after moving into my current home, I began looking for plants that would provide color as well as food for the birds and pollinators in my yard. Although I was not aware at that time of the rationale for avoiding exotics and preferring native plants, I did make some good choices, including an American beautyberry (Callicarpa americana L.) which is also called a French mulberry.

This shrub can grow about 5-7 feet high and about that size wide as well. The flowers are tiny and a pale lilac color, circling the stem like a corona.

They eventually turn into green berries that slowly turn in color, starting out in shades of pink and lilac and eventually gaining a beautiful deep purple shade as they ripen.

People can eat the berries, which are apparently very sweet. I haven’t tried them; they do cause stomach cramps for some people if more than a few are eaten. They are a popular food for wildlife, however. White-tailed deer like both the berries and leaves; raccoons and opossums eat them, too. It is the birds that really get the most fruit from my bushes, including Northern cardinals, Eastern towhees and gray catbirds. The birds kindly transported some seeds to a spot next to my back porch, so I now have a large bush there as well.

When the berries began ripening at the end of August, the cardinals began dining on them first. They were quickly followed by house finches (Haemorhous mexicanus) who began visiting the shrubs daily. The female house finch stayed on the bush far from the house. 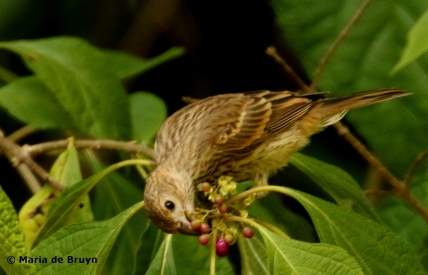 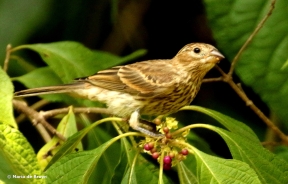 The male house finches were bolder and fed on the berries right under the kitchen window. It has been a pleasure to watch them. 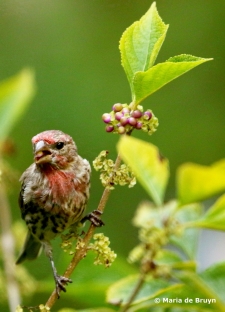 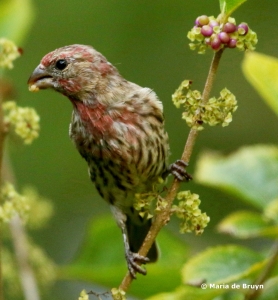 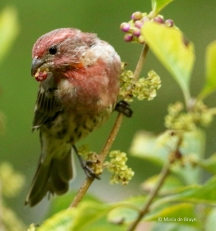 The Northern mockingbirds (Mimus polyglottos) are a bit more reluctant to feed when they see me looking at them from a few feet away. Even with the window closed, they are shy but I finally got one to sample some berries while I watched.

The leaves of the beautyberry have been used as an insect repellent in folk remedies; laboratory studies have shown that a chemical compound in the plant will stave off mosquitoes. 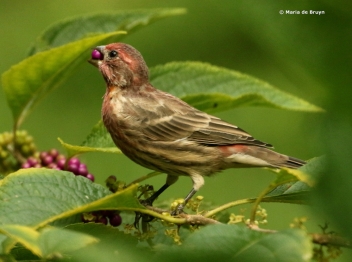 I haven’t pruned my beautyberries much but it seems that the plant will bear more fruit the next year if this is done. I do think I will transplant some young ones to other parts of the yard this fall, however, as this plant – along with the purple pokeweed (Phytolacca decandra) – is a real wildlife crowd pleaser.

13 thoughts on “The birds and the beautyberry – a great match”