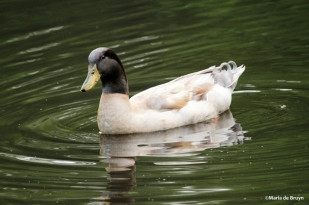 A mixed-parentage duck at one of our local ponds lost a companion recently, leaving him sad and bereft. A fellow wildlife photographer mentioned that this bird, who I am calling Harry, is the offspring of a mallard and a pekin duck (Anas platyrhynchos x Anas platyrhynchos domestica). Harry stayed by the body of the duck who died for a while, clearly distressed.

Another pond resident is a female Canada goose (Branta canad

ensis), who I have named Clara; she is currently raising four goslings. Canada geese are monogamous and the fathers help raise the young, but Clara appears to be a single mom. At least, she doesn’t have a male goose partner.

However, Clara is not alone. It appears that Harry has attached himself to the goose family, keeping close to them in the water and on land. He swims with them and follows them onshore when Mama leads the brood to vegetation to feed for a while. 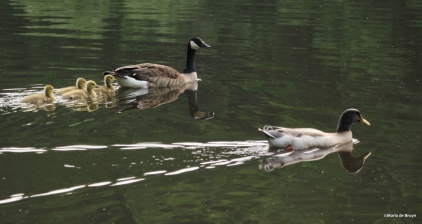 Whereas Canada geese that are not habituated to humans will threa

ten and even attack people who come too close to their babies, they become pretty mellow when they are often around humans who have shown they will not harm them. Mama kept an eye on all the people taking a stroll around the pond, but she simply shepherded the goslings aside when a person came too close. Harry also kept an eye on the people wandering about.

Goslings are able to feed themselves as soon as they are hatched. They will eat grasses and sedge and also grain if it is available.

xample when foraging in water, tipping forward and extending their necks and heads underwater to scoop up vegetation and even the occasional fish.

The goslings can walk and swim right after birth and manage to run, flapping their stubby wings to keep balanced.

On 21 May, some other Canada geese flew overhead and one pair descended to the pond. Harry flew over to meet them, quacking a greeting, and led them back to Clara and the brood where they kept the blended family company for a time. 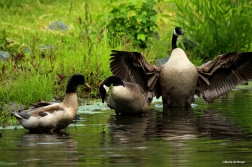 On 27 May, I saw Clara and children foraging at the pond with the two visitor geese but Harry was nowhere in sight. I feared that something had happened to him. 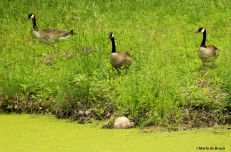 Later, when I visited in the early morning, Clara and the kids were resting and then foraging while a great blue heron (Ardea herodias) fished nearby; Harry was nowhere to be seen. I felt a twinge of sadness.

My feelings were unfounded, however. As Clara and brood swam toward the other end of the pond and I accompanied them walking along the shore, I suddenly saw a brown-headed duck with twin curls by his tail swimming near shore. As Clara came into sight with the four babies swimming in line behind her, Harry began quacking and quacking as he watched them approach. 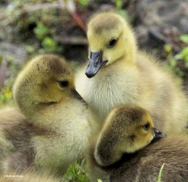 Clara began honking in response and veered toward Harry, who swam out to meet the family. They were obviously both quite pleased to have each other’s company again. I hope this blended bird family continues to enjoy their inter-species companionship throughout the summer!