This spring of 2021 has offered some delightful chances to see interesting insect species, some of which I’ve noticed before and some that were new or gave me my first opportunity to observe them up close. While not many people aside from entomologists pay much attention to the “creepy crawlies,” they are certainly well worth watching in my view. Including insects in my nature observations greatly enhances my experience of appreciating the natural world. 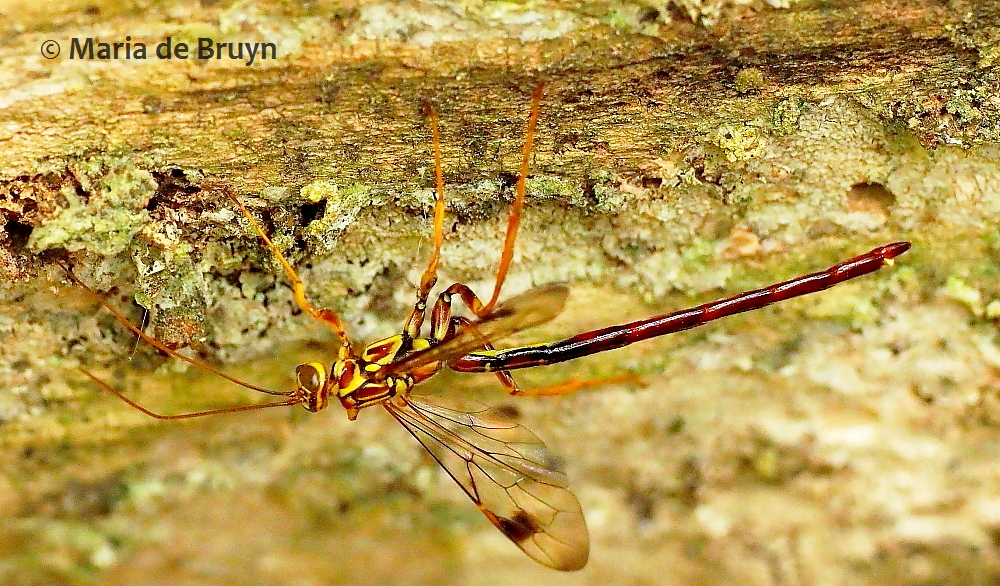 The month of May brought me two especially awe-inspiring events. The first was seeing long-tailed giant ichneumon wasps (Megarhyssa macrurus) preparing for reproduction on a nature trail in Chatham County. It was easy to distinguish the females (right) from the males (above) because they had very long ovipositors (a tubular organ through which a female insect lays stored eggs). In the species I saw, the ovipositor can be 4 inches long!’

There were several male and three female wasps flying about. None of them showed the slightest interest in the large human looming overhead. Even if they had, I needn’t have worried since these wasps don’t sting people. The females were busy pressing their antennae against a disintegrating hardwood log’s bark, aiming to detect vibrations inside. 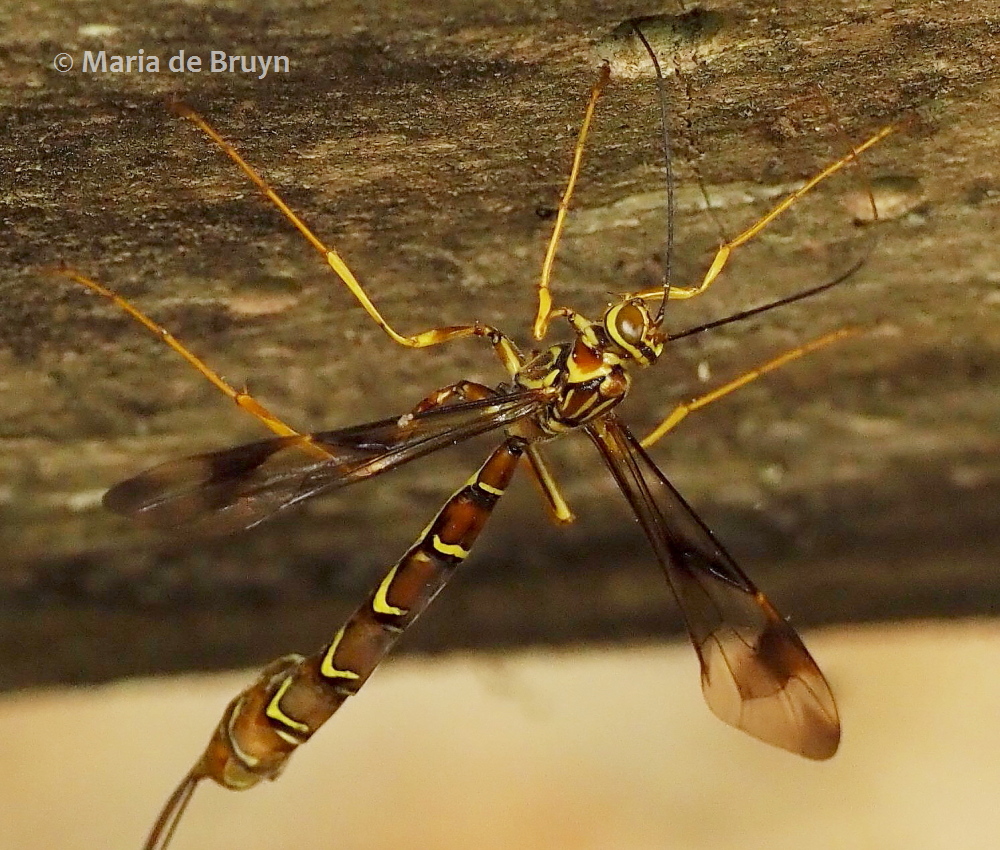 The mothers-to-be were “listening” for the best spots to lay their eggs by identifying where the larvae of the pigeon tremex horntail wasp (Tremex columba) were buried. Why you ask? The mother ichneumon paralyzes a horntail larva before laying an egg next to it. When her own offspring emerge from the eggs, they will eat those unfortunate horntail larvae while they prepare to overwinter until they emerge as full-grown ichneumon wasps in the spring.

The giant ichneumon’s ovipositor has three components. In the middle is the ovipositor proper, a filament with two interlocking parts that slide against one another; it is tipped with a cutting edge that can drill through wood. Some researchers have data indicating that the cutting edge may contain some ionized zinc or manganese. 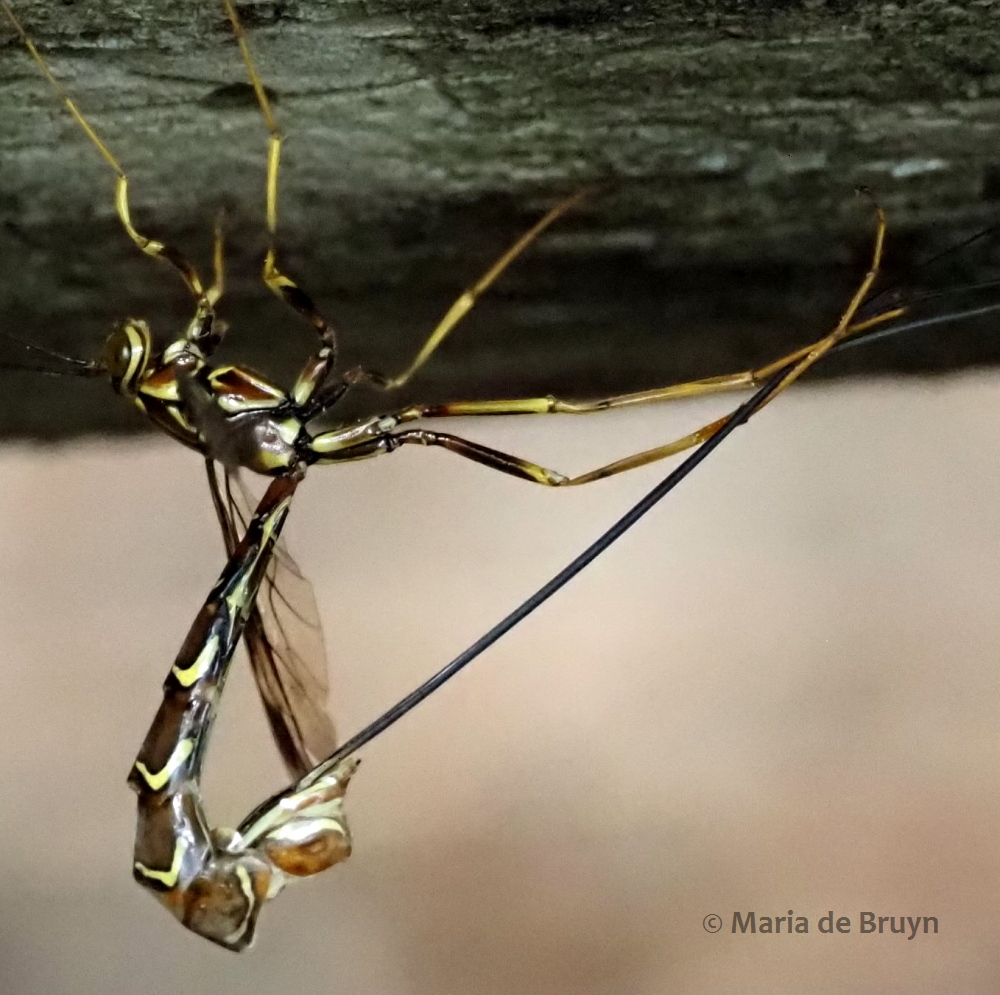 Two other thin filaments called valvulae sheath the central structure and their function is to protect the egg-laying organ. During egg-laying, they arc away from the ovipositor. 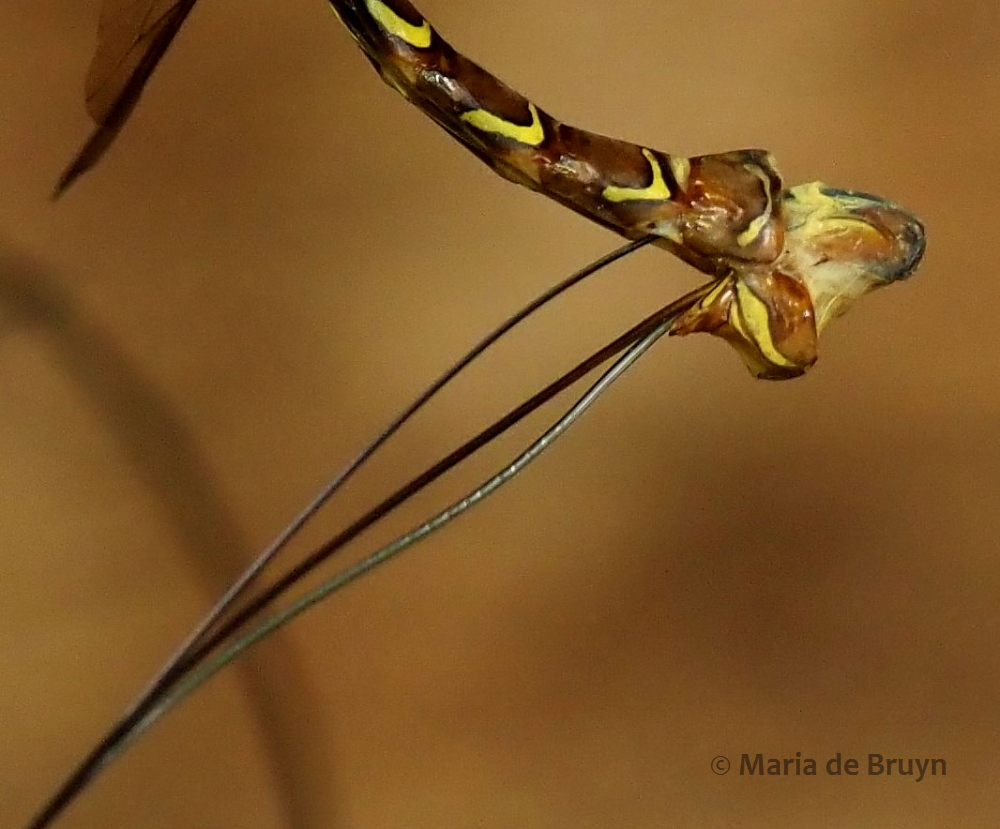 While I watched one female wasp in particular, she sometimes had part of her ovipositor coiled up in a transparent expandable pouch at the end of her abdomen.

She would push out the ovipositor and appeared to smooth it out with her legs. The literature I read about the wasps did not explain this movement, but I thought she might be pushing eggs down the tube. Watch the video to see what you think!

When she finished this smoothing movement and had found the right spots for her offspring, the protective lining filaments separated from the ovipositor itself and she inserted it into the log. It was a fascinating process to witness. 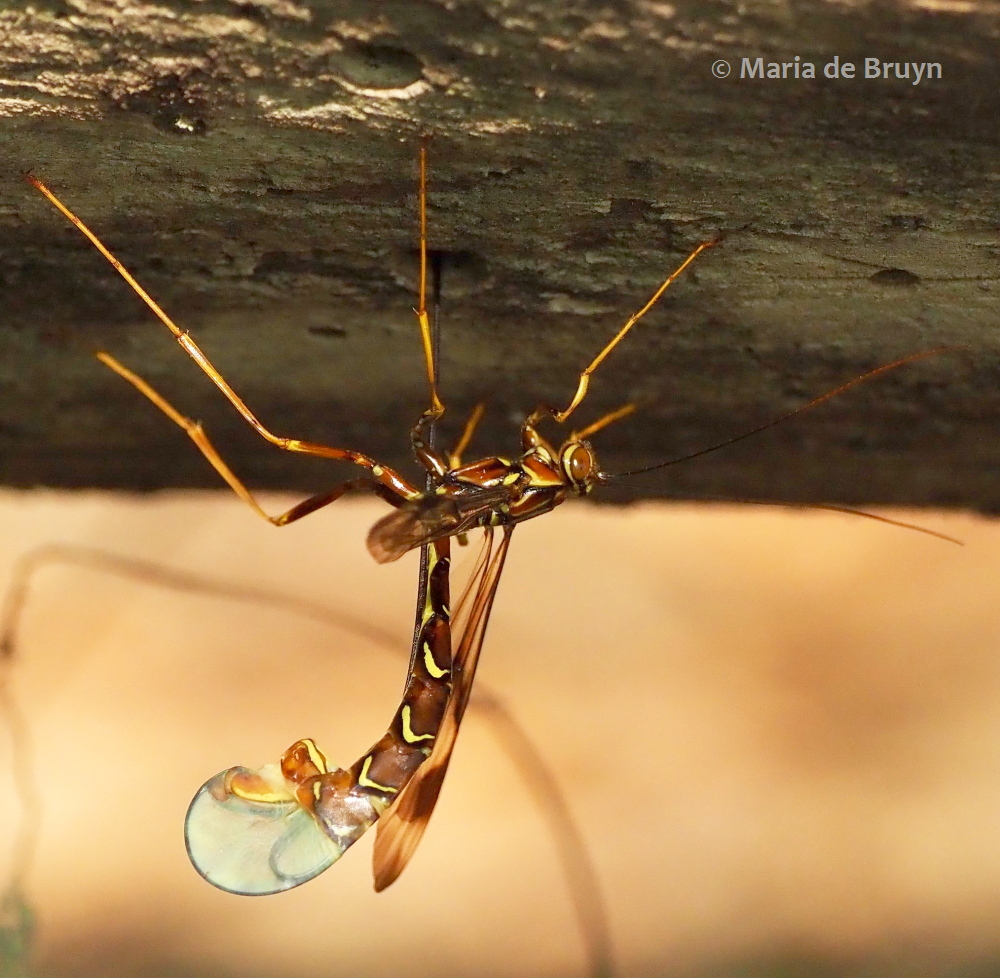 Although ichneumon wasps are parasitic, various species are beneficial insects since their larvae feed on insects that harm food crops such as boll weevils, codling moths and asparagus beetles. The adults usually only live about 27 days and may only drink during that time. Their adult goal is to find a mate and then reproduce. 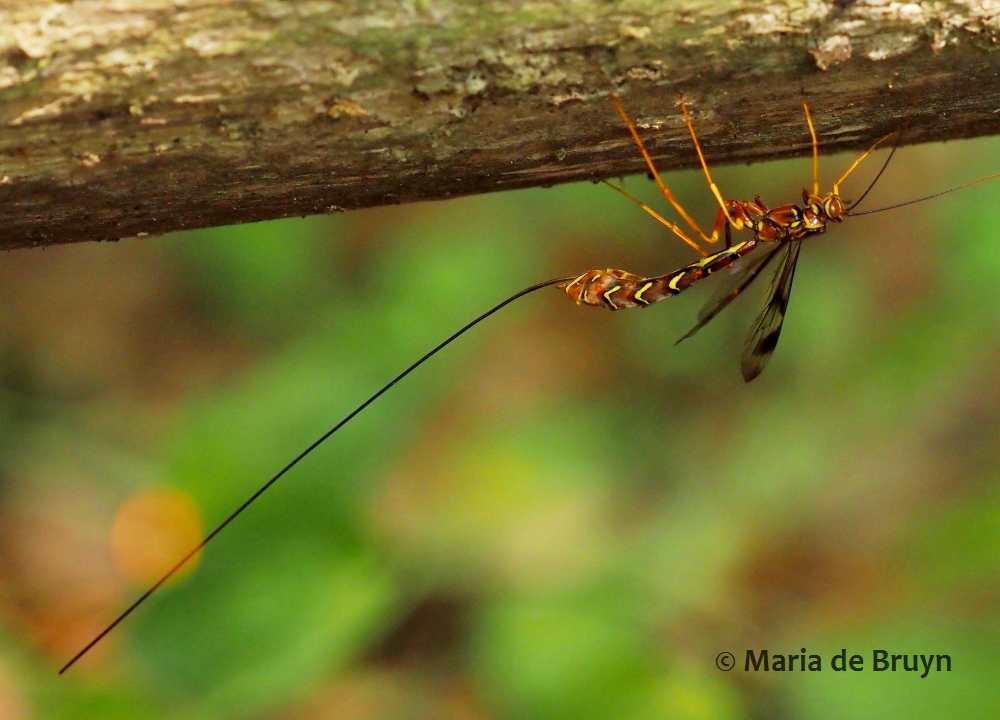 Another way in which the ichneumon wasps have contributed to human society is by serving as an example for the medical community. The STING Project at the Imperial College in London is investigating options for Minimally Invasive Surgery (MIS) to diagnose and treat various medical pathologies. The research team is now developing a flexible steerable probe that was inspired by the ichneumon wasp’s ovipositor!

My other exciting insect event involved a moth. Last fall, a cecropia moth (Hyalophora cecropia) positioned its cocoon on the door jamb of the women’s restroom at Cane Creek Reservoir. The reservoir’s manager feared that it would be damaged there and asked if I would be willing to care for it over the winter. I took the cocoon home and kept it safe during the fall, winter and much of this spring.

Cecropia moth larvae (caterpillars) are often found on maple, cherry and birch trees. Why this one chose a building as an overwintering site is a bit of a mystery. Since the pupa was going to be dormant all winter, I placed it upright in a large plastic container with a grate over the top and kept it on my screened-in porch.

Periodically, I would check on it and it seemed to be ok. This was important as these moths are “univoltine” — they only have one generation of offspring per year. Out in nature, the caterpillars may fall victim to parasitic wasps and flies that lay their eggs on them. So it was fortunate that we were able to “rescue” this cocoon.

One evening at the end of May, I stopped working on my porch to go inside to watch the news. When I came back after about 20 minutes, I spotted a brilliant large moth on the screen. My youngest cat spotted it at the same time, so I shooed her inside. The cocoon scarcely had a hole in it; I really wish I’d seen how the huge moth got out.

The cecropia moth is North America’s largest moth with a wingspan up to 7 inches. The males and females look similar but the males like this one have larger, more feathery antennae.

Female moths emit pheromones that the males can detect from up to a mile away. After mating, the female lays up to 100 eggs. Both sexes die after about two weeks as they lack functioning mouths and digestive systems and don’t eat. 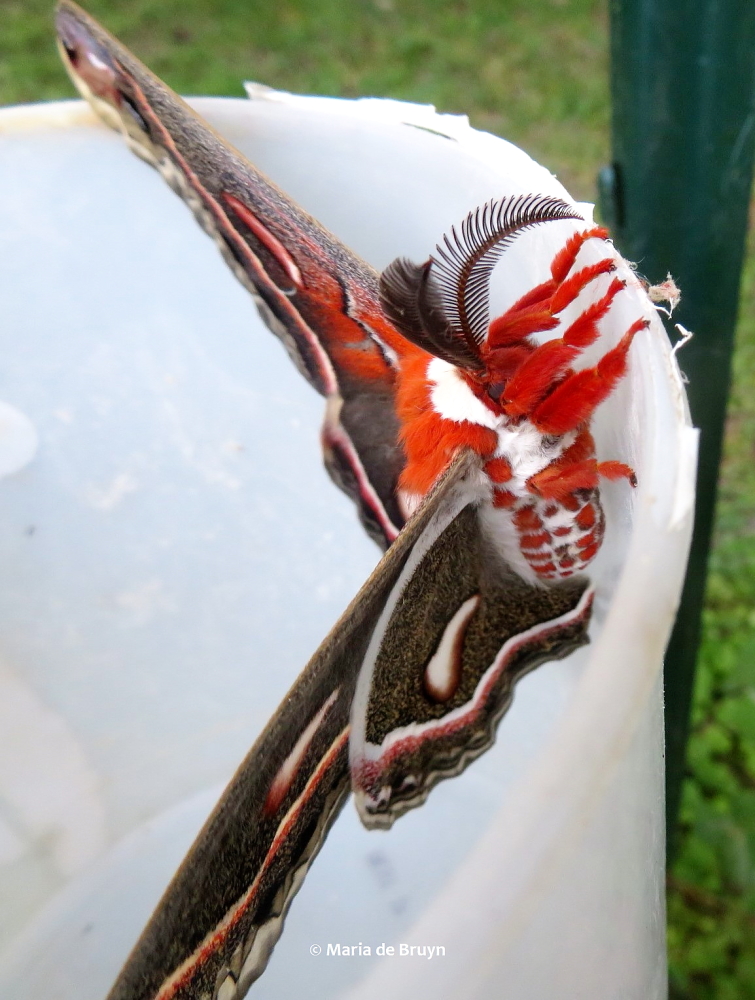 The moth’s short adult lifespan must have made this guy anxious to get underway. Or seeing my cat and I hastened his development. One website reported that it takes the moth a few hours to dry before they can open their wings and fly. 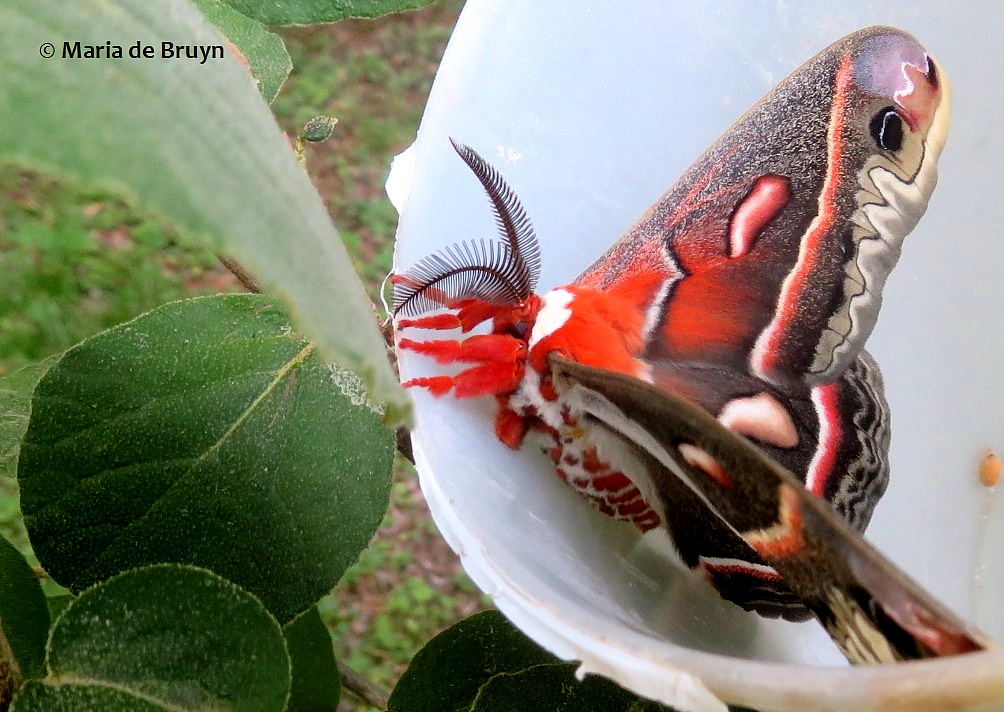 However, very soon (perhaps 10 minutes) after I removed him from my porch and took him outside (never touching him with my hands), he began vibrating his wings. In less than a minute, he launched himself upwards and flew towards the top of the nearby tall pine trees, setting off on his quest for a mate.

I suppose it is possible that the moth had emerged earlier and had crawled away to hide but that seemed unlikely. In any event, he looked like he could fly just fine, and I sincerely hope that he found a mate and that they were able to collaborate in ensuring a new generation of this stunningly beautiful species! And I was grateful for having agreed to overwinter the cocoon as it enabled me to contribute to the propagation of this wonderful moth. In any event, I was enthralled to see what a gorgeous creature he was. These moths are generally nocturnal so seeing him was a treat!