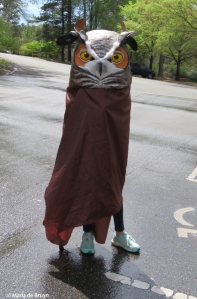 This past Saturday morning, we awoke to water streaming from the heavens in quite a heavy downpour. A local conservation group, Friends of Bolin Creek, had scheduled a wildflower walk to see some of our ephemeral spring blooms but the wet conditions were not inviting. A decision to postpone the walk to early afternoon was taken – and the weather-people had gotten it right – the sun began shining at mid-day and the temperature rose, creating lovely conditions for a walk after all. A large owl (later revealed to be granddaughter Kate of the group’s president) greeted the small group of intrepid walkers and we set off to see what we could find.

Our first flowers were the not-yet-open blooms of a Southern arrowwood (Viburnum dentatum). We passed numerous black and yellow millipedes on the paths and then found another millipede species (Narceus americanus) curled up next to a little brown jug (also known as arrowleaf heartleaf, Hextastylis arifolia var arifolia). 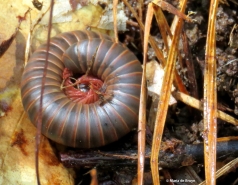 We came across other nice specimens of the plant, including one with four small flowers. 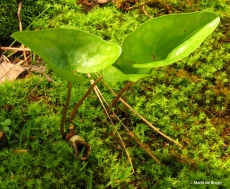 The painted buckeye trees (Aesculus sylvatica) were blooming profusely with their greenish-yellow flowers.

Clusters of Eastern spring beauties (Claytonia virginica) were in their vicinity. 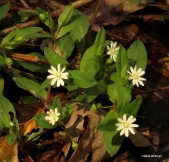 Some of the star chickweeds (Stellaria pubera) were near another white bloom, the rue anemones (Thalictrum thalictroides).

Both the trout lilies (Erythronium americanum) and cranefly orchids (Tipularia discolor) had already bloomed, the trout lilies about 7-10 days ago and the orchids in the winter (when there are no leaves). One orchid had left behind its brown stalk as a witness to the flower that had seen the light.

Tiny bluets (Houstonia pusilla) in clusters here and there provided some variation from the ubiquitous white blooms that we were seeing. The mayapples (Podophyllum peltatum) were just emerging and it will be a little while before we see their flowers emerge underneath the leafy umbrellas.

The creek was running high and fast and we debated on crossing it at the first branch. Only two of us had wellingtons (and one lady found that her boots leaked); others were wearing running and walking shoes but everyone made it across by using stones, canes and walking sticks that some of our group had brought along. Our immediate reward was a view of a gorgeous pinxterbloom wild azalea (Rhododendron periclymenoides).

A sighting of a foamflower (Tiarella cordifolia), followed by a cutleaf toothwort (Cardamine concatenata) provided a bit more color, as did the littleleaf buttercup (Ranunculus abortivus), although its blooms were not fully expanded yet. 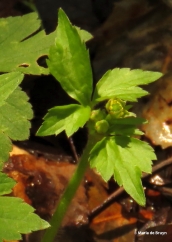 Only the jigsaw puzzle-like leaves of the bloodroot (Sanguinaria canadensis) were in evidence as that flower had stopped blooming already. A tufted titmouse singing overhead (Baeolophus bicolor) gave us a nice little concert as compensation. 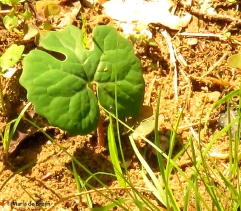 And then we came across our three surprises of the walk. We had already seen several Eastern tiger swallowtail butterflies (Papilio glaucus) fluttering by in one’s and two’s and we remarked how welcome they were because of the paucity of butterflies we had had the past couple years. But then across another branch of the creek, we spotted some 12-20 butterflies congregating over some delicacy of unknown (to us) origin. 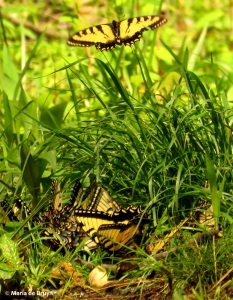 The water was fairly deep and flowing fast, so we did not cross but we surmised that someone’s dog had left a pile of poo to provide a mud-puddling butterfly feast. 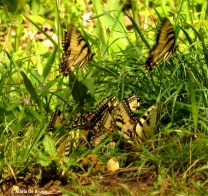 Then we noticed on a rock just below the bank under the butterflies where two Northern watersnakes (Nerodia sipedon) were having a little rest.

They were a bit dull in color, which became quite obvious when compared to a third northern watersnake that we spotted on a rock closer to the creek – perhaps a younger individual who had decided that a sunbath was just the thing for a Saturday afternoon. 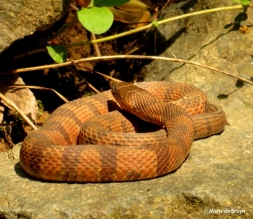 While we were all enamored with the flowers we’d seen, the butterflies and snakes gave our walk a special feel. 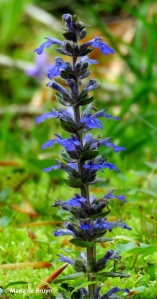 On our return trip through the woods to reach our transportation, we came across an invasive plant, the bugleweed (Ajuga reptans). We had already seen plenty of Japanese wisteria, mahonia, privet and autumn olive and agreed that another volunteer day to weed out some invasives would be a good contribution to the preserve. But that is for the future – right now, we are happy to think back to our surprise spottings!

For a short time, I wrote a column for the community newsletter called Southern Neighbor