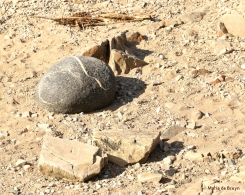 Continuing on from my previous blog about people and landscapes in Quebec: walking along the shorelines was a pleasant activity; the rocky beaches could be quite beautiful and revealed different kinds of plant life there.

There were many signs along the roads we traveled; as elsewhere, many indicated how to get from one place to another.

The public toilets were a nice amenity.

In one Native Canadian village, the signs were not only in French but also the indigenous language. And it was nice to see scientific symbols on signs indicating research centers. 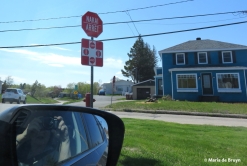 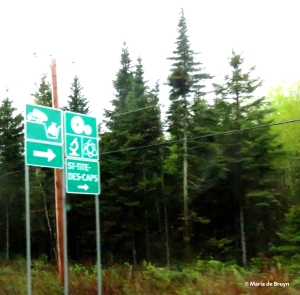 Other signs (photographed while in the car so somewhat blurry) advised about reporting crime and safe driving, including one about “cleaning your teeth” (an inside joke about mispronunciation of the French for flashing lights).

We were asked to watch out for wildlife. We never did see a moose but I saw several white-tailed deer during our trip (just not on the road). 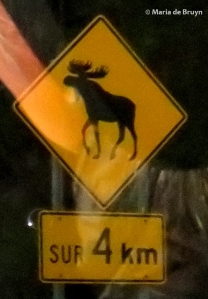 We passed houses during our outings, as well as an “old time” covered bridge, for which we made a detour so we could drive through it. One car game was counting the number of “two-toned” houses, i.e., painted in two colors.

Barns dotted the landscape as well. 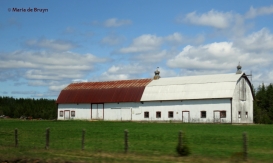 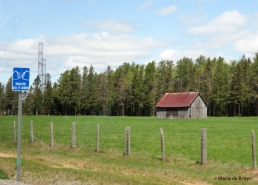 I noticed that people in this area used exactly the same recycling and garbage containers as we do in my town; the school buses look like US buses as well. 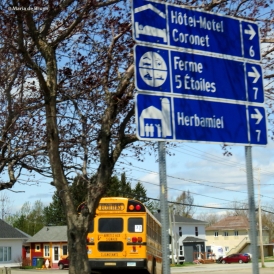 To get to the Tadoussac dunes, we had to cross a waterway on a ferry, which was really quite nice with a viewing deck and clean, spacious restrooms. They did have some signs that made us scratch our heads in a bit of wonderment, however.

The dunes where we saw the thousands of birds flying over in migration were lovely, albeit quite windy at times. 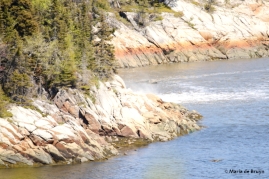 In the towns we saw some interesting people. I don’t know if the gentleman on the left was doing something in an official capacity, but the puppeteer on the right had apparently just entertained people. At Pointe-au-Pic, a woman was getting in her daily (?) exercise. 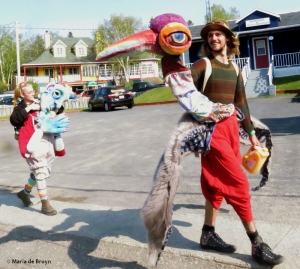 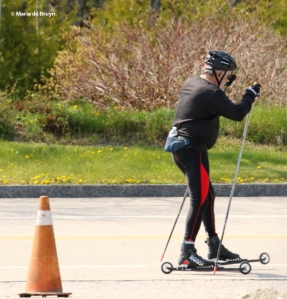 The birds continued getting their exercise by looking for insects, buds and seeds in the various deciduous evergreens and other trees. 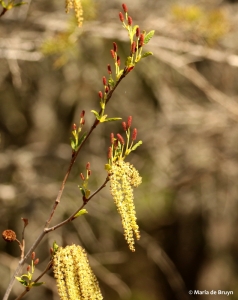 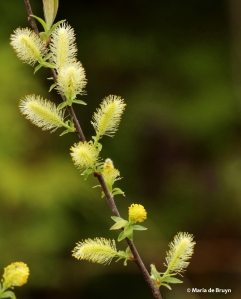 The combination of forests, dunes, beautiful shorelines and waterways, charming villages and friendly people made our stay in Quebec a real pleasure. We were also greeted every morning and evening by a couple white-throated sparrows (Zonotrichia albicollis) who sang loudly to one another. One was singing when we left, too, and it was a very nice goodbye song. 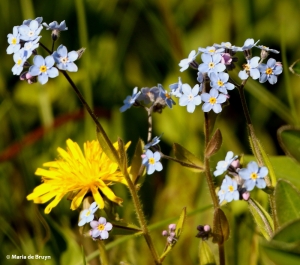 My memories of the Quebec spring migration journey will be wonderful, too, and the beautifully blooming forget-me-nots (Myosotis) we saw were an apt symbol of remembrance!

For a short time, I wrote a column for the community newsletter called Southern Neighbor