Don-tso and Schatje were both very sweet animals who enriched my life, but they were very different personalities. Don-tso, whose Native American name represented a spirit who sits by your shoulder and warns you of danger, lived up to that name. She was a delicate small cat, rescued as a feral kitten from the streets of Amsterdam, who remained anxious and extremely cautious throughout her life. Even after a decade, I could not approach and pick her up; time spent on my lap was always on her terms and at times of her choosing. She was nevertheless very loving and brave.

Schatje (Dutch word for “dear”) was a wild deer who chose to befriend me and one other neighbor, approaching us as a young doe. We are usually warned not to let urban deer grow accustomed to us as this can endanger them – when they trust people, it makes them vulnerable to those who want to hurt or eradicate them. Schatje was so persistent, however, that I broke that rule and got to know her very well over a five-year period. 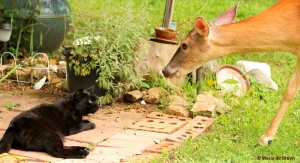 Both Don-tso and Schatje were very curious. This came home to me one summer day when a strange incident occurred. My other cat, Jonahay, had become agitated when Schatje came near and when I tried to move him away, he displaced his aggression and attacked Don-tso who was nearest to him. As I tried to intervene between Jonahay and Don-tso, I felt a nudge behind me – Schatje had marched up and was trying to get a good look at what was happening! As she approached, little Don-tso gathered up her courage and stood her ground – she was actually ready to spring at Schatje, who was considerably larger! I finally got Don-tso and Jonahay into the house and things calmed down.

Over the years, as I’ve watched Schatje’s family and other deer visit my yard, it’s become apparent how observant and curious they are. Undoubtedly, their curiosity plays a role in their survival skills – it pays for them to notice changes in the environment that could pose a danger or threat to their well-being. Sudden changes – movement and sound – will evoke the well-known white-tailed deer response where they raise their tails like warning flags and stamp their feet. 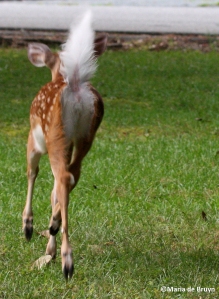 In other cases, however, when something in the environment has changed during their absence, they will investigate. Scientists believe that this curiosity provides them with information that can be helpful in knowing, for example, where they might find new sources of food or possible obstacles in their way when they want to make a quick escape. When I have made new additions to my yard, some of the deer – most noticeably Schatje and her offspring – have taken quite some time to examine them through sight, smell and touch.

If new yard art moves, it may take a while before they approach and some individuals will never get close. Others are braver, however, like these young ones; the doe exploring the whirling bird did so after about four days of cautious investigation, coming a bit closer each day. 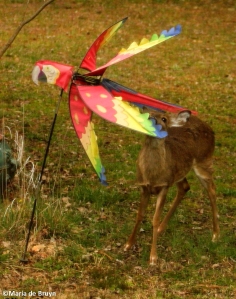 The deer can also be curious about other animals, like this fawn who wanted to get close to a squirrel – who definitely was not interested in any togetherness. 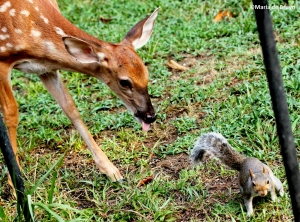 While I may not meet another deer who is as trustingly curious as Schatje, her descendants will most likely continue to explore my yard and satisfy their curiosity about any changes happening here. And in doing so, they will help satisfy some of my curiosity about deer behavior!

1 thought on “Deer and their curiosity”