When the tundra swans (Cygnus columbianus) and snow geese (Chen caerulescens) leave the Arctic and sub-Arctic tundras and climes of northern North America to over-winter along the coasts of the United States, those of us who live further south get to enjoy the marvelous spectacle of tens of thousands of these birds gathering together. They appear in huge masses and smaller family groups to feed and then swirl through the skies in an aerial ballet as they settle down to feed again or spend the night in a marsh or on a lake or pond. Witnessing these enormous conglomerations of birds really is an unforgettable experience.

The tundra swan – also known as the whistling swan in North America – is a large, graceful bird. Its diet is varied, ranging from aquatic plants and some molluscs (mostly during the summer) to seeds, grains and tubers like potatoes in the winter. In North Carolina, where they migrate during winter, you can find immense flocks foraging in open agricultural fields before they settle for the night (in winter, these birds sleep mostly on the water; during the breeding season, these monogamous birds sleep mainly on land). 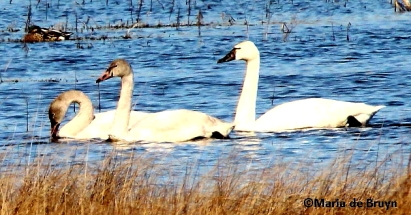 The adult swans are entirely white except for a black bill, while the immature birds are first a dusty gray color that eventually turns white; the young swans also have a pinkish bill. 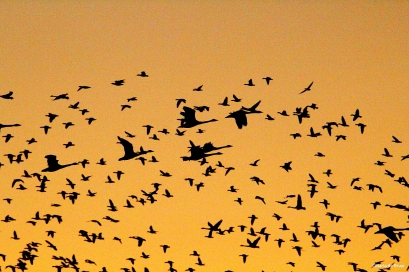 During a birding trip to the Outer Banks of North Carolina, our Audubon group was privileged to witness the tundra swans returning to a lake in the Pocosin Lakes National Wildlife Refuge one night.

It was like watching a black wave moving back and forth across the orange sky at dusk, while being surrounded by a tremendous volume of honking (not whistling!). Afterwards, I and others regretted that we hadn’t thought to film this so we had a record of the sound. I think we were just so mesmerized that it didn’t occur to us to do that. Here you can hear what their calls are like. For us, it was impressive as we were listening to the sounds of a flock of about 20,000 strong! http://www.allaboutbirds.org/guide/tundra_swan/sounds

The snow goose, like the tundra swan, migrates in the winter to North Carolina from the uppermost parts of North America; like the swans, they forage in winter agricultural fields in large groups. There are two color variations: some are almost entirely white, while the “blue morph” variation has a white head but blue-gray body feathers. Our birding group was lucky to see another aerial ballet at Pocosin Lake National Wildlife Refuge put on by the snow geese.

As a member of our group excitedly called, “They’re rising!” an enormous flock surged up from the lake, flew back and forth just a little and then settled. 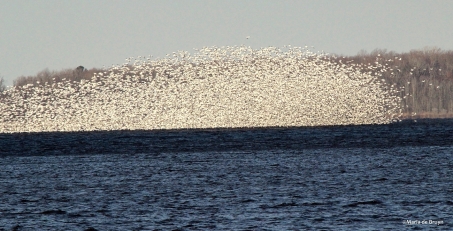 A minute later, they repeated the process and we watched as the swirling cloud rose and fell, just moving side to side a bit. They were very far across the lake from us, so it wasn’t possible to get great shots but at least I had evidence of the sighting! 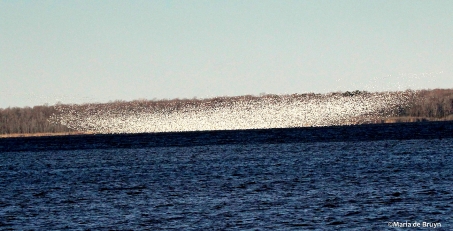 The other birds that we saw in some numbers were the more familiar Canadian geese (Branta canadensis). They are commonly seen in our area so it didn’t seem quite so special to spot them at the coast, but they passed by in flocks and beautiful formations that were well worth watching. 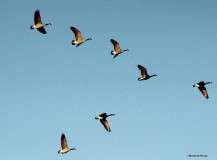 These were the only geese that we were able to see up close a bit; here you see a pair at Lake Mattamuskeet National Wildlife Refuge.

I had seen starling murmurations before and was quite impressed with those. Witnessing the gigantic flocks of tundra swans and snow geese was equally fascinating – if you get a chance to see such large groups, do stop to watch them!

2 thoughts on “Tundra swans, snow geese and Canada geese, too – beauty by the tens of thousands”