As you may know, our furry, agile, smart little friends, the Eastern gray squirrels (Sciurus carolinensis), are fond of all kinds of vegetable matter. Acorns, nuts and seed are a favorite: they will chew through the screen of a backyard porch to get to bird seed (as my neighbors learned after leaving a bag of it there), chew through the plastic lids of food buckets in which I was keeping bird seed outside (the seed is now kept indoors) and spend lots of time contemplating how they can overcome baffles and other barriers designed to keep them off bird feeders.

At my house, they are somewhat lucky since I also put some seed under feeders for the ground-feeding birds such as dark-eyed juncos, white-throated sparrows, mourning doves, Eastern towhees and sometimes Northern cardinals and blue jays. The squirrels will amiably scurry about beside the birds to consume some sunflower seeds or millet. I also give the squirrels a treat now and then by putting out fruit bought from the reduced-produce rack at the supermarket, where I can buy veggies that the supermarket would otherwise throw away.

Apples are a common treat and the squirrels often eat those on the spot, although they may feel a need to carry away their meal to enjoy it at some distance from their family members. Blueberries and plums are nice, too. 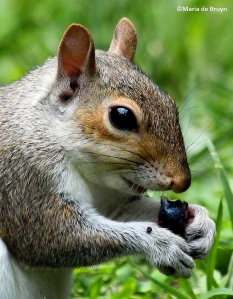 The squirrels’ tastes in fruit have surprised me on occasion though. After learning that banana peels mushed up at the base of azaleas will help their growth and blooming, I took to putting overripe bananas by those plants. Sometimes, when checking the next day, I would find the peels someplace else in the yard and then realized that squirrels enjoy a tasty banana now and then. When I put out oranges in an attempt to attract orioles, the citrus didn’t last long once the resident tree rodents discovered them.

Squirrels will hoard food for later consumption, hiding the fruits of their labor in numerous spots around their territory. According to Wikipedia, each squirrel will make several thousand such caches every season! If they think they are being watched, they will also pretend to bury food in a cache, while actually hiding the morsel in their mouth to bury it someplace else later. Clever indeed!

I must admit, though, that I had not expected to see a squirrel assiduously burying grapes one day. Researchers have found that that they will eat the most perishable acorns right away, while caching those that will stay preserved the best. So what made this squirrel think that the grapes she was burying would last underground? Unless this was one sneaky squirrel who was just temporarily hiding her/his bounty until s/he could enjoy those grapes in relative solitude.

I’m looking forward to spring when I can sit outside to watch the squirrels ‘ behavior some more; the yard can be a real learning lab!