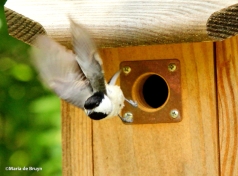 I have two bird boxes in my yard designed to attract brown-headed nuthatches (Sitta pusilla). While I do have these birds at my feeders, they have not deigned to create nests in the boxes; one is still empty and the other was occupied by a family of squatters – darling little Carolina chickadees (Poecile carolinensis). I don’t know if this pair had had kids together before, but sometimes these birds retain their bonds for several years.

In addition to the nuthatch boxes, I have five bluebird boxes and c

hickadees had begun nests in two others. It is not uncommon for them to begin a couple nests and then finally settle on one. On 12 April, I discovered that Mom had laid five white with brown-specked eggs in a nice soft nest made of moss, soft grasses and some down, even using a bit of pillow stuffing I had left out for interested nest-builders.

Ten days later, 22 April, I opened the box to see if everything was ok and surprised her sitting on the nest. (I had tapped on the box beforehand in case she would want to leave for a bit; didn’t happen!) She gazed at me in alarm and then began dipping her head and beating her wings against the nest; this is called a snake display to warn off predators.

Two days later, I opened the box and discovered the eggs had hatched – I think she had been brooding them two days earlier since the babies didn’t seem quite as naked as I expected. That would mean they hatched after only about 10 days (and the average seems to be 12-15 days of incubation according to websites).

Both parents take on feeding their offspring. In warmer weather, they search for insects among foliage and under tree bark, sometimes hanging upside down to get a meal. This pair also visited the nearby feeders, obviously intent on teaching their young that suet, dried meal worms and seeds are also good to eat. 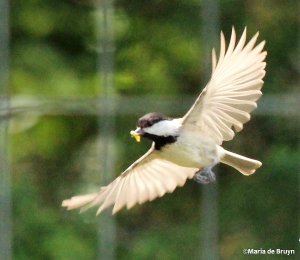 Like the nuthatches and robins, the parents were also fastidious about cleaning the nest; and these almost full-grown young seemed to be pooping a lot! 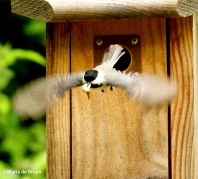 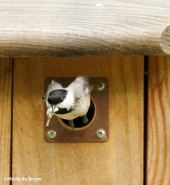 The young usually fledge about 16-19 days after hatching. If these birdlets had hatched on 22 April, I figured they would be ready to leave the nest around 7 May. Despite being sick with an infection that was keeping me mostly supine, I couldn’t let the opportunity for observation go by. So on the 5th of May, I roused myself for a sit-down in the yard in the early afternoon. I first waited until the parents had both left and carefully lifted the bird box door to see a bright-eyed, pretty much full-grown chick staring at me. S/he scooted back and it looked like there were only two others – so the other two siblings had already fledged. This did seem to be a very precocious family! 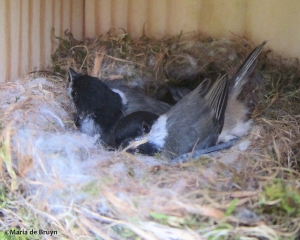 This might be one of the chicks that fledged earlier. When a fledgling is begging for food, it quivers its wings rapidly. Females also do this before the young leave the nest when they want the male to feed them.

Because I was feeling fairly ill, I had to stop watching the parents go to and fro after a couple hours. On 6 May, I ventured outside in the early afternoon, hoping against hope that I might just be lucky enough to see the last chicks fledge. And I did! 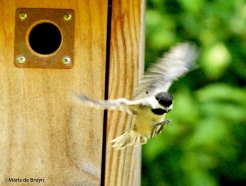 spent time looking out of the box before venturing out. One took a flying leap and swerved up into a tree.

No. 2 spent some time calling (the parents were still coming in regularly with meals!), then launched itself and landed on some nearby branches. 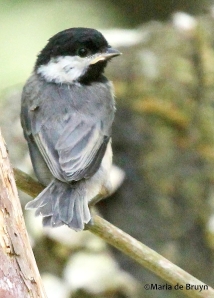 No. 3 spent time flexing its wings before venturing forth.

I did check the box to be sure they were all out and then watched as the parents called to them as they flitted about the various trees behind the nest box. If I’d felt better, I would have stayed to observe a bit longer but I was pretty satisfied with having seen the fledging!. 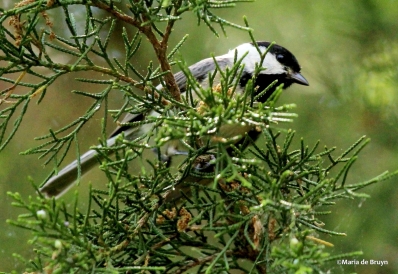 The next morning, a pair of Carolina wrens was already bringing in twigs and placing them atop the chi 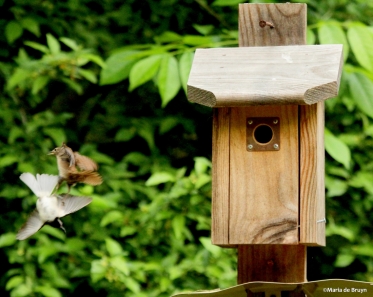 ckadees’ nest (after removing some remaining fecal matter). One chickadee ventured back to peer into the box but the wren pair loudly chased the original owner away.

All in all, some very cool days, with some mental delight balancing out the physical distress for me.

If you liked this blog, please let me know by liking or leaving a comment here on the blog page. Thanks!

And for those who want more details on chickadees’ lives, see:
http://animaldiversity.ummz.umich.edu/accounts/Parus_carolinensis/

2 thoughts on “The squatter family: those cute – and seemingly precocious – little Carolina chickadees!”