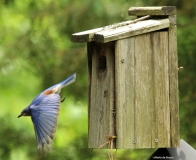 Last year was a disappointment for the bluebirds (Sialia sialias) and me when a cowbird (Molothrus ater) laid her egg in their front-yard nest. The cowbird hatched first and when I looked a few days later, the bluebird eggs were gone. The bluebirds dutifully cared for the foster child but had none of their own.

This year, they returned to the same nesting box and despite there being whole flocks of cowbirds around, they were able to avoid being surrogate parents this year. On 2 May, there were three eggs and by 5 May there were four. 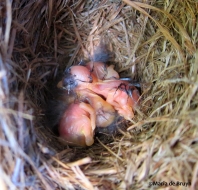 On 17 May, after mama and papa left the vicinity of the nest, I peeked in and saw the hatched babies, very naked newborns indeed! Mama was often with the babies and papa came to bring food, but mama left from time to time. They both visited the feeders to replenish themselves.

I set up a canopy chair to observe at what I thought was a good distance but discovered I was too close. The parents would arrive in the tree fronting the nest but if I was too close in their opinion, they would not go to the nest or only after I had been still for quite a long time. It was interesting to see that they were feeding the hatchlings dried meal worms along with other insects that they had caught.

They also seemed to be feeding the babies fruit – wild raspberries from what I could tell! 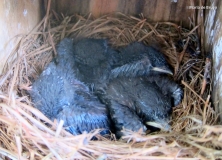 By 28 May, the babies were much larger and feathered. Mama and papa were kept busy ensuring they were well fed! And house cleaning to remove their brood’s fecal sacs was also a definite necessity!

The parents remained very vigilant – not only keeping an eye on me but also other too curious visitors. On 1 June, a gray catbird (Dumetella carolinensis) suddenly descended to the nesting box, fluttering its wings furiously to remain suspended in front of the hole while it looked in. It then flew up on top of the box but the bluebird adults chased it away VERY quickly! 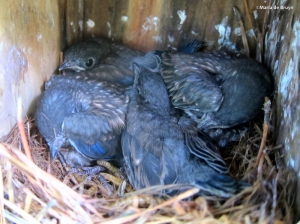 By 2 June, the babies were looking ready to fledge. The next day, I had time to watch the box and saw a baby repeatedly looking out (but not really calling much). 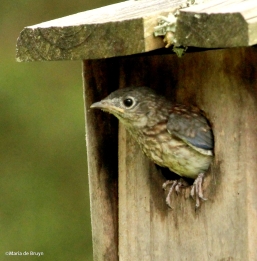 Sure enough, I saw it leap and swoop up to perch on a nearby branch. 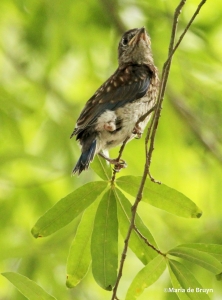 The next baby soon began peeping out, too, although this one also retreated inside the box now and again. Eventually, this baby swooped out as well, but s/he flew all the way across the street to a neighbor’s yard. When I carefully looked inside the next box, I saw that they were the last two to fledge – the others had gone before.

Oddly, I haven’t seen the babies at the feeders although I see the parents there. 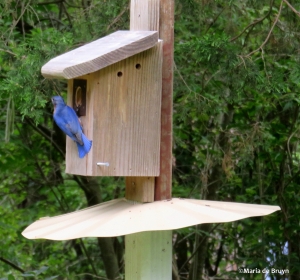 They or another bluebird couple were checking out a nest box in the backyard. They didn’t use this one (Carolina wrens have moved in with a nest there in the last few days) but they have constructed a new nest in another backyard box today. So I hope to witness another fledging in a few weeks! Yay for the bluebirds!

2 thoughts on “Yay for the bluebirds!”