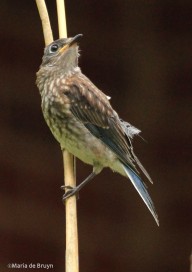 The first week after they fledged, I didn’t see the baby Eastern bluebirds (Sialia sialis), although their parents were frequent visitors to the suet/meal worm feeders. I hoped that they had made it and not fallen prey to a neighborhood cat or other predator. When I decided to take photos at the time of the summer solstice, however, I discovered they are all doing quite well and keeping mama and papa quite busy!

Sometimes they perched nearby and waited for a parent to come to them with a meal. Other times they waited in nearby trees.

They also followed their parents to the feeder, perching on a bamboo stem or feeder pole, waiting and calling to make their hungry desires known.

They could be quite demanding, which may account for the parents stuffing their mouths quite full of meal worms. 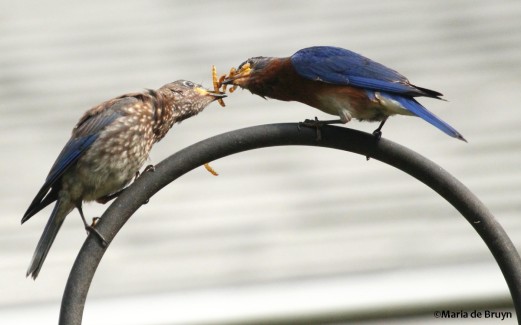 I guess those wide open mouths make it quite obvious what they are after. 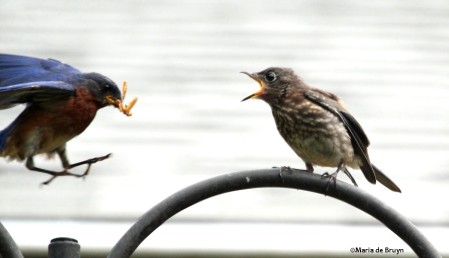 I don’t know whether there was some rivalry in play here or one baby misjudging its landing coordinates on the pole very badly. Good thing those claws missed its sibling’s eye!

Not every juvenile was just expecting waiter service from dad or mom, though. One young’un (“Southern” for young one) began practicing meal worm gleaning from the feeder him (or her)self, successfully I might add.

As his or her siblings learn this, it will be nice for their parents, who probably will want to distance themselves from the constant nagging for food. It will be interesting to see if they decide to nurture a second brood this year!