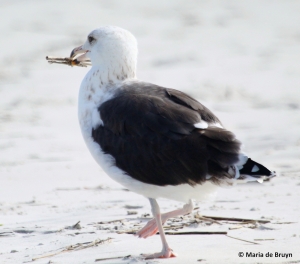 During a recent visit to Topsail Island, one of my favorite get-away sites, the various gulls, terns and other birds were very busy: resting, eating and investigating beach debris such as twigs, like this great black-backed gull (Larus marinus).

When I looked through my zoom lens and saw two juveniles of the species picking up and dropping items into the sand, I decided to photograph them. Given some deterioration in my eyesight, even through the zoom lens, I thought one of them was examining a large black twig so I shot away. Imagine my surprise when I downloaded the photos to my computer and enlarged them to see what the gull was actually carrying around!

Most of the time, s/he appeared to be grasping the knife by the blade rather than the handle end, which totally amazed me. 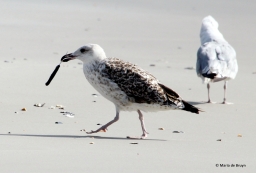 The bird would drop the paring knife and then pick it up again.

One time it was by the handle.

I wish I had realized what the gull was doing when I was there so that I could have picked up the utensil but at the time, I was convinced it was a twig and after shooting the series, I turned to other birds.

I posted the photo on a Facebook birding group page with the remark that: “Beach-goers and fishermen need to pay a lot more attention to what they leave behind onshore!” The responses that came were interesting:

– wow…scary the things people leave behind
– I hope he dropped it when he realized how sharp it was!
– Smelled like fish most likely….
– Sometimes they ‘steal’ from us while our backs are turned on a fishing pier!
– Maybe he’s in a gang?
– Considering it’s Topsail, more likely one of Blackbeard’s crew. Nice image of the gull.

And then one person apparently doubted that the photo I had posted was real: “The size of the gull and the size of the knife looks fishy. The knife is only a bit longer than the beak. That must be one big gull. It’s all in the perspective, I guess.” Since I don’t own Photoshop or some other program with which I can combine photos or insert things into photos, I can assure you that the series shows what happened.

While the respondent who mentioned birds stealing items from people is stating a fact, this site was at the end of the island very far from any piers. So I can only assume that some careless human left the knife behind on the beach (like the cell phone cover and plastic that I collected for the garbage that day).

It is well known that the trash on beaches often ends up in the sea, harming animals that ingest it and contributing to large floating garbage piles.

On 20 September 2014, the Ocean Conservancy is sponsoring the International Coastal Cleanup — the world’s largest volunteer effort to clean up waterways and the ocean. I don’t live near an ocean but will pick up trash near a large lake in my area. And I urge you all to participate in some way if you can! It may be a drop in the ocean/waterways bucket but the drops add up!

4 thoughts on “Danger on the beach!”