One day when I was at a beautiful nature park in the neighboring city of Durham, I was – of course – looking for wildlife. For a while I watched a Northern mockingbird (Mimus polyglottos) pecking along the path in a quest for insects. It wasn’t until I got to the pond, however, that a scene unfolded which kept me occupied for a while. 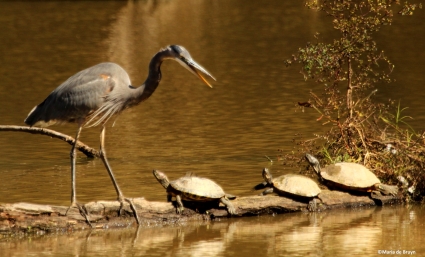 The resident great blue heron (Ardea herodias) had stationed him (or her) self at the end of a log on which several pond slider turtles (Trachemys scripta) were basking. He seemed to be staring in their direction, so I wondered if he was considering eating one. After seeing a video of a heron swallowing a groundhog whole, I knew that they can consume quite large meals. After a time, though, it seemed that the bird wasn’t interested in the turtles but in the fish swimming in front of them. After patiently waiting for a time, the heron stabbed and had success!

The heron decided to move to a new spot, down near the other end of the log. The sun was bright and the pond was filled with many dozens of turtles enjoying the warmth. Whereas red-eared sliders and painted turtles at Mason Farm Biological Reserve will often plop into the water in haste when they sense people nearby, these turtles didn’t seem to care if they were watched from the pond’s edge. But I did think they would move as the heron neared them.

How wrong I was! The turtles saw him coming but they just let the huge bird use their backs as stepping stones! 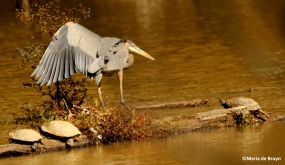 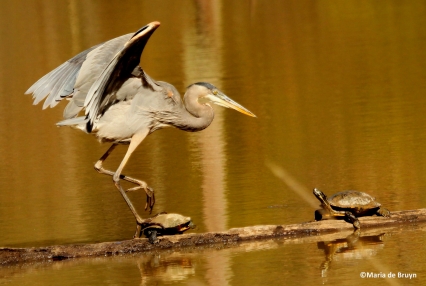 The bird’s claws completely encircled some turtles as it moved along, occasionally balancing on one leg.

I noticed a few turtles with scutes bent up into the air. (Scutes are sections of the carapace.) I began to wonder if this was the result of the heron’s claws snagging on their shells as the bird proceeded.

If that was true, though, why didn’t the turtles skedaddle out of there when the heron came near? I only saw one turtle plunge into the pond. 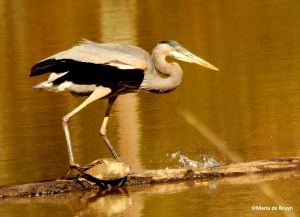 At home, I did an Internet search and found out that turtles shed their scutes from time to time and that was apparently what I was seeing. So I learned that turtles shed! Turtles’ shells are extensions of their rib cage and attached to their spine; terrestrial turtles don’t shed but aquatic turtles do shed scutes, which are made of keratin (like the material of horns or fingernails).

The heron kept moving along as he wasn’t having much success in the different spots he chose. He did get a couple fish but smaller than his first catch. Eventually, I found that I wasn’t quite as patient as the heron so I finally left after a very entertaining hour of observation. I do so love watching the natural world!

4 thoughts on “Turtles as stepping stones”