Well, not we human beings but the spiders. Autumn is a great season to

admire the handiwork of spiders as they build temporary or semi-permanent abodes and hunting traps. During my walks in different areas this fall, I’ve seen various forms of webs, but none as large the 4-acre web found in a building in Baltimore, Maryland.

Many of the webs are really lovely as they shimmer in the sun, especially when covered with dewdrops. 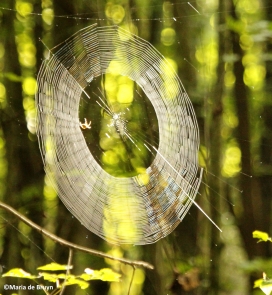 Not infrequently, you will see the web’s weaver hanging out, like this banded argiope (Argiope trifasciata). 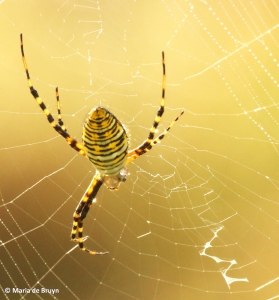 The trashline orbweaver (Cyclosa turbinata) arranges bits of old prey in a line in its web, apparently helping to camouflage itself as it looks like another piece of trash in the web. 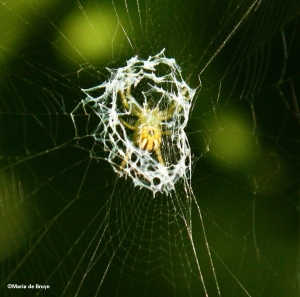 The lined orbweaver spider (Mangora gibberosa) has a conspicuous web in that the center part comprises a dense circular decoration (called the stabilimentum) that shows up well against green vegetation. The rest of the web is barely visible, however.

Some spiders, such as sheetweb spiders, make webs that look like shallow bowls in the grass (the photo below right was taken looking down on it). The tiny sheetweb dwarf spider (Florinda coccinea) has a red body with black palps, eye region and caudal tubercle. There is only one species in this region of the United States, 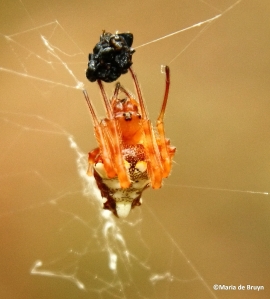 Arrowhead spiders (Verrucosa arenata) suspend a few or more strands of silk along or across trails at about head height. Have you wondered how they manage to suspend a web across a trail that is quite wide? They first produce a fine adhesive thread that can drift over the gap with a breeze. When the thread sticks to something at the other side of the gap, the spider feels a change in the vibrations of the thread and then reels it in and tightens it. The spider then crosses the gap on this thread and strengthens it by placing a second thread and so the web begins.

If you are walking along looking up in the trees or down at the ground, it can mean you end up with sticky web in your face. The tensile strength of spider silk is greater than steel of an equivalent weight but much more elastic, so wiping that silk off your skin can take some doing!

Orbweavers tend to make large vertical webs, like the ones being spun by the marbled orbweavers (Araneus marmoreus) in the next photos.

Each gland produces a different kind of thread, for example, for a safety line, for trapping prey or for wrapping up caught prey as shown by this writing spider (Argiope aurantia).

Here you can see how the spider is using one leg to help position the line of web being spun.

of energy building webs and it is not uncommon for them to eat their own web in order to re-gain some energy used in spinning.

The spider is thus a great re-cycler in addition to helping keep the other insect populations in check! Nature is so cool.