While ospreys are one of my favorite large birds, the gorgeous ruby-crowned kinglet (Regulus calendula) has won my heart among my tinier feathered friends. Today I’m sharing some portraits of kinglets made the past couple months (in my yard and at Bolin Creek greenway in Chapel Hill, Jordan Lake woods, Sandy Creek Park in Durham).

One of the more active small birds (about 4 inc 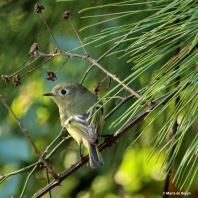 hes or 10-11 cm long), this kinglet is in almost constant motion, which makes getting good portraits a bit of a challenge. Despite this high level of activity, however, research has shown that the ruby-crowned kinglet only uses up to 10 kcal a day in energy. (Sometimes I think this holds true for me as well as the weight I want to lose just stays in place.) 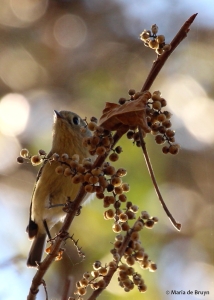 Their main diet consists of insects, including spiders, ants, wasps, beetles and aphids. They will also occasionally eat seeds, fruit and sap.

In addition, these kinglets – or at least the one that has been visiting my yard during migration the past couple years – also love suet a lot.

The ruby-crowned kinglet is known for its habit of flicking its wings as it forages for food; this helps it scare up insects (another bird that uses its wings in its hunt for food, like Northern mockingbirds and snowy egrets). 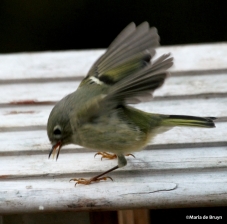 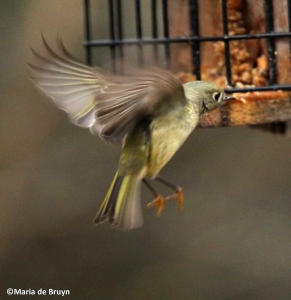 Though they don’t look as adept as hummingbirds, they sometimes hover to get at insects on the underside of leaves; they show this hovering behavior at feeders, too, before landing or flying off with a piece of suet snatched in flight.. 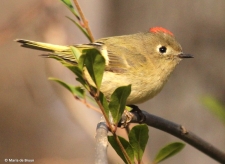 Most of the time, the male’s beautiful little red crest (which gives the species its name) remains hidden unless it gets excited about something. 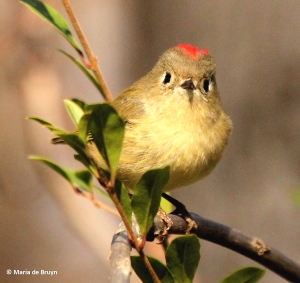 The ruby-crowned kinglet seems to me to have an expression of perpetual wonderment as it flits quickly from one spot to another. Its thin little legs with yellow-red feet help it land securely, on a branch, wire or feeder.

In my pursuit of portraits, I’ve found that just as I think I have the bird in focus, it has disappeared from my viewfinder and I need to look up and around to locate it again..Given its diminutive size, one wouldn’t expect that the female lays up to 12 – twelve! – eggs in its nest, which is elastic and can expand as the brood grows. The male and female stay together until the chicks fledge at about 2 months and they will defend the nest against intruders.

Sometimes, I hear the chittering call before I see the tiny wonder and only very rarely get to enjoy its longer song, which apparently varies according to region.

Ruby-crowned kinglets can live up to at least 4½ years (as shown by a banded bird). I don’t actually know if there is more than one bird visiting me or whether another will take its place in time.

What is very cool for me is that my visitor can become very friendly indeed. Last year, on two occasions, I was carrying a replenished suet feeder outside when the kinglet flew in to perch on it as I held the feeder in my hands – giving me a great close-up view. I look forward to seeing if the kinglet will favor me with an up-close-and-personal meeting again this coming winter!

3 thoughts on “A tiny bundle of yellow-feathered joy”