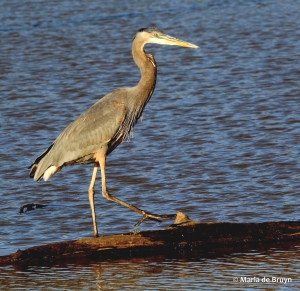 It’s not uncommon for visitors to our ponds, lakes and rivers to see what look like tall, statuesque bird sculptures on shorelines. The great blue herons (Ardea herodias) – North America’s largest heron species – can stand for long periods without moving or only slightly tilting their heads as they exercise extreme patience in their quest for a morning, midday or evening meal.

If they have a chance for easy pickings, these herons will certainly take advantage of it, as I discovered when the koi and goldfish in my pond were disappearing. But in their natural habitat they will scan the water intently to find their prey. 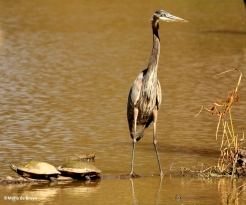 If you have the time and inclination to watch them for a lengthier period of time, you will note how they hunch down and stretch up as they position themselves to get good views of the water around them. 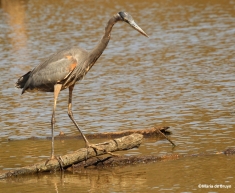 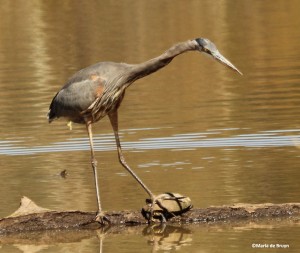 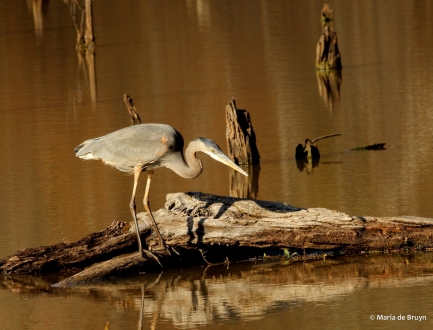 They stare downwards and to the side, following the movements of fish, frogs and crayfish. When the wind blows, their plumed neck and tail feathers sway gently and beautifully in the breeze. 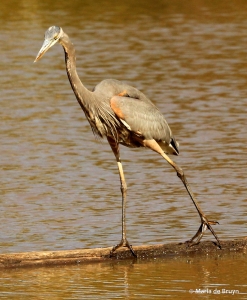 If nothing seems nearby, they will move with quiet and slow deliberation to another spot, often quite nearby. Unlike the snowy egrets, they don’t stir up the mud with their feet or flap their wings to create movement in the water.

When a fish does swim by, they burst into very fast motion, plunging their long beaks and whole heads down to grab what they have spotted.

They are not always successful, sometimes coming up empty beaked! 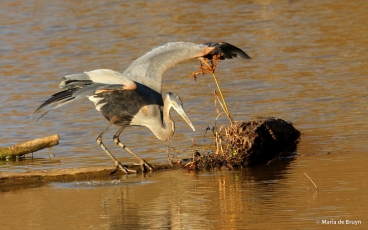 But their patience obviously does pay off, too. 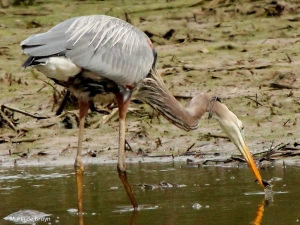 Once caught, they need to work the fish or other prey around so that they can swallow it down smoothly. As they swallow their meal whole, this is important. (And they can eat a very large meal; there is a film on the Internet showing a heron swallowing a groundhog!!) 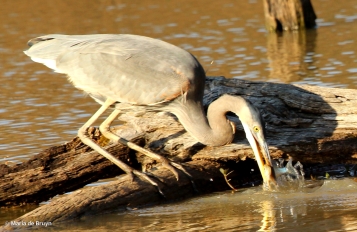 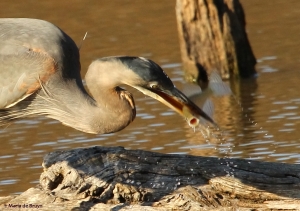 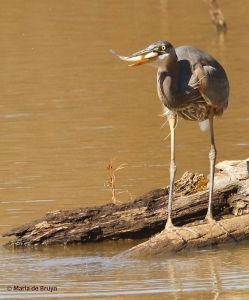 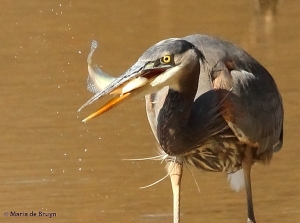 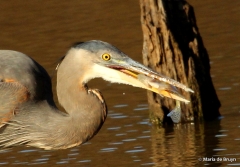 If you look carefully, you can see the meal slide down their long necks. 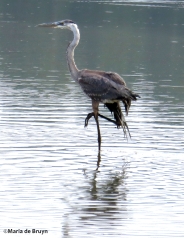 This fishing strategy works well for the great blues as they can continue to hunt even when injured. This bird had a very badly damaged wing and apparently couldn’t fly anymore but it could stalk slowly in the lake as it looked for food.

The bird below had had some kind of encounter – either with a man-made obstacle or some form of wildlife that left it with an injured wing and broken leg. Bald eagles are one of the few predators of adult herons and this great blue lives at Jordan Lake which has a group of such eagles in residence. Despite the handicap, the heron could fly from spot to spot and then stand in wait for meals to swim by.

If disturbed, these birds emit a very loud and harsh squawk or croaking sound and then often take off. They certainly wouldn’t win any singing contests with their definitively non-melodious calls. 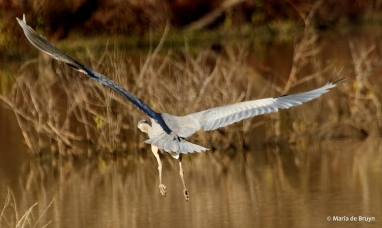 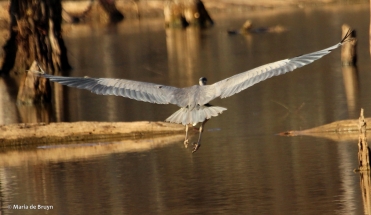 They prefer to fish in solitude and don’t care for other birds invading their territory. This great blue and great egret wanted the same spot and the great blue made some efforts to chase off its white competitor. However, the egret refused to leave and eventually they shared the spot with some meters of space between them.

Watching the herons fish has not only given me an appreciation for their innate patience but has also enhanced my own patience as well as I stand and wait with them until it’s finally mealtime.

2 thoughts on “Patient fishers of the bird world”