When I was about 13 years old, my girl scout troop went to a somewhat “primitive” camp for our summer adventure. We slept in tents and had toilet paper, but we had to construct what we would use such as a table, a toilet (a hole in the ground with a seat of branches lashed together), and a shower (with a tarp but held up with branches bound by ropes and a pail with a pull rope). The shower was fine except for one thing – some daddy longlegs decided to take up residence on the tarp and for me – and others – sharing the space with what we thought were long-legged spiders was not really our idea of fun.

tually called harvestmen (scientific name, Opiliones) and they are actually not spiders at all! In fact, they are interesting insects that do not really look like spiders except for the fact that most species share the trait of having those extremely long legs.

Many Opiliones species can detach a leg, which continues to twitch for some time after leaving the body – this is thought to serve as a distraction that enables the harvestman to escape from a predator.

Spiders and harvestmen are both arthropods but differ in various ways. Spiders have segmented bodies, while harvestmen have a body of only one segment, with their single pair of eyes sitting atop the oval structure, like the black eyes you can see on the orange harvestman here. Spiders, on the other hand, have 3 or 4 pairs of eyes, as well as silk glands that are lacking in harvestmen.

Harvestmen’s legs protrude from structures that look a little bit like mechanical nuts; they are actually called the coxa and trochanters. These may be the same color as the arachnid’s body or be of a different color. 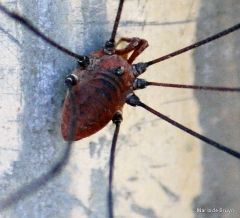 Similar to spiders, harvestmen do have a pair of pedipalps – specialized appendages – and these form the arachnids’ feeding apparatus together with the first pair of legs. This feeding organ is called the stomotheca.

The two harvestmen below were seen in early December at Mason Farm Biological Reserve. They were approaching one another, separating and then coming together again. I have no idea what they were up to. Mating came to mind but in winter?

More than 6,400 species of harvestmen have been discovered on all continents except Antarctica, but it is speculated that there may be as many as 10,000 species. I have seen them in varied habitats such as a forest, on beach sand, clinging to plants and wandering about on manmade structures. They vary in color and appearance as seen below. Some are mainly one color, some are two-toned and others have patterns on their bodies.

Some harvestman end up being parasitized by smaller insects such as the red mites seen catching a ride on this individual. If they don’t die, though, they can go on to mate, lay eggs and have offspring.

I used to avoid harvestmen if possible, but now I take an extra look at them hoping to find one with coloring and/or a body pattern that I haven’t seen before. Nature continues to be intriguing!

2 thoughts on “We are NOT spiders!”