For my friends who know me as a staunch vegetarian, it might come as a surprise that I have become fascinated with sea pork (Aplidium stellatum). It is one of the most colorful yet odd forms of sea life I have personally encountered.

My introduction to this interesting creature occurred on Topsail Island in May 2013, where I found two specimens on the beach. 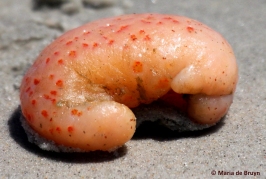 Then, on 19 January this year, I saw some sea pork again – oodles and oodles of it, actually, accompanied by sea liver as well!

So what is sea pork, you might ask? Each blob or globule is a tunicate: an invertebrate animal that can be one individual or a collection of individuals that reproduce to form colonies measuring an inch or more in height. The larvae look a bit like tadpoles until they join to create the colonies, living in water-filled sac-like structures that are rubbery or cartilaginous to the touch.

These creatures are marine filter feeders. The sacs have two tubular siphons, through which water is drawn in and expelled during feeding and respiration. The zooids extract nutrients from the water.

What are zooids? These are the reddish-colored individuals that form a colony. You can see them in circular groups under the sac’s tunic, which varies in color, including creamy pinks, orange, green, red, lavender, deep purple and black. The colonies can become large, spreading 12 inches or more and weighing up to 10 pounds.

Sea pork was given this name because the rubbery tunic bleaches to white, resembling salt pork or fatback, after the colony dies. While alive, sea pork is eaten by bottom-dwelling fish, sharks and skates.

Apparently other creatures also find a home on sea pork, including barnacles and sea whips (Leptogorgia).

Sea liver (Eudistoma hepaticum) looks similar to sea pork, but the tunic is softer. It is said to feel slimy in comparison to sea pork but the consistency seemed the same to me. 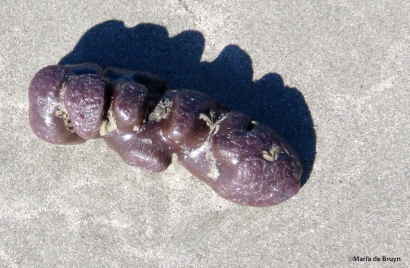 However, the difference may be more apparent when they are in their natural habitat, fastened to the sea floor or some other substrate rather than torn loose from their underground homes and cast ashore.

I spent some time throwing live sea pork back into the ocean until I came on a stretch of beach that was covered with these blobs; I hoped the tide would come in and carry the creatures back to their watery homes where they might continue their colonial lives.

I now have a query in to a Smithsonian marine botanist for help in identifying this organism. A scientist at the North Carolina Museum of Natural Sciences ruled it out as a marine invertebrate and said he and colleagues surmised it is a marine alga. Suggested IDs are welcome!

7 thoughts on “A marine mystery for the uninitiated”