Longleaf pine trees (Pinus palustris) grow for 100-150 years before they reach full size and they can live as long as 500 years. Their extremely long needles give the young trees the look of a spike with grass growing out of it. At the tops of trees, the long, fanned out needles paint a pretty picture when silhouetted against the sky, even on overcast and dull days. 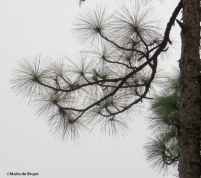 Unfortunately, the longleaf pine forests have dwindled in size as a result of logging and this has contributed to the endangerment of a unique bird – the red-cockaded woodpecker (Picoides borealis). 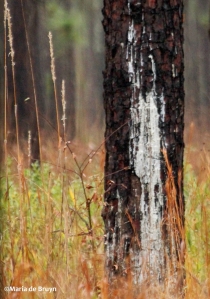 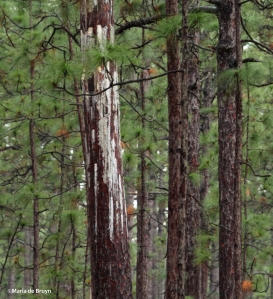 When the longleaf pine forests were still plentiful, the red-cockaded woodpecker evolved into a very specialized bird species as far as nesting is concerned. They mainly nest in longer-lived longleaf pines, preferring trees that are infected with red heart fungus as this softens the wood and makes it easier for the birds to dig out a nest cavity. They are the only woodpecker species that makes nest cavities in living rather than dead trees.

The nest cavities are constructed by a family of birds and completing one can take as long as two years (or longer). The families work on several cavities at a time and you will find clusters of trees with nest holes in given areas. The cavities are pecked out in such a way that the tree releases resin around the nest hole and you will see trees that are covered with long thick strands of resin coming down from nests.

The woodpeckers employ this tactic because the heavy flow of resin helps to keep tree-climbing snakes away from their nests, eggs and chicks. A breeding male will scout various nest cavities and then roost in the most recent cavity with the heaviest flow of pitch. The female lays the eggs and then the male incubates them during the night-time hours. 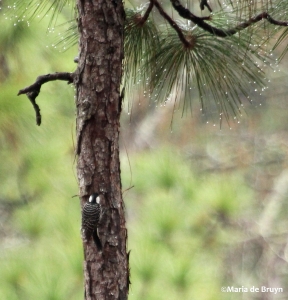 Raising the young becomes a cooperative effort as older sons remain with the parents and help incubate, brood and feed the babies. Family groups can range from three to nine or more members. The female offspring only rarely stay with their breeding parents as they move off in search of their own mates.

These woodpeckers mainly eat insects, including ants, beetles, roaches, and wood-boring insects as well as caterpillars and spiders. The family will forage as a group and sometimes also eat fruit and berries. Their abandoned nest cavities are used by other birds and small mammals.

The species is now considered vulnerable to extinction, with only about 12,500 of these birds remaining in the Southern United States. This is equivalent to about one per cent of the original population of this woodpecker. In response, there are now conservation efforts being undertaken to preserve the longleaf pine forests as habitat for the red-cockaded woodpeckers. 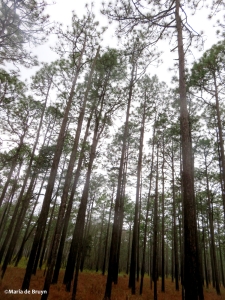 At the Santee Coastal Reserve Wildlife Management Area in South Carolina, as well as in the Sandhills areas of South and North Carolina, forest rangers and others are working to enhance the longleaf pine forests for the birds. Controlled burns are clearing out dense undergrowth as the woodpeckers prefer sites with less deciduous growth; you can see them foraging quite low on trees.

In some areas, wildlife management projects are trying to help out the birds by creating artificial cavities, into which man-made nests are inserted. Restrictor plates around the holes also serve to stop other species from enlarging the holes or shape of the nest hole so that the red-cockaded woodpeckers will keep using them. 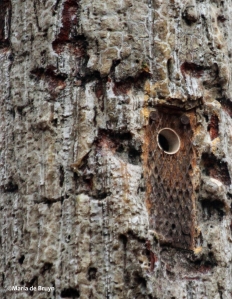 At the Santee Coastal Reserve, several such nest holes can be observed alongside other trees where the birds are making their own nest cavities. Trees with nest holes are banded with white tape so that rangers can keep an eye on the woodpeckers’ activity. 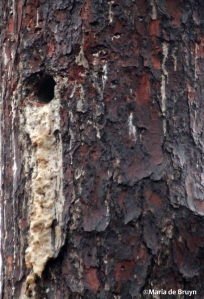 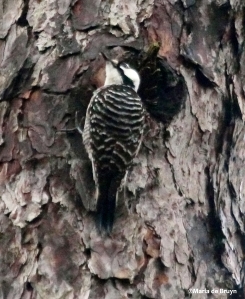 It is heartwarming to see the efforts being made to restore the longleaf pine forests and the habitat for the woodpeckers – perhaps this will prevent this species from going extinct. And the National Wildlife Federation has stated that research shows that long-leaf pine forests will be especially well adapted to coping with environmental changes caused by global warming.