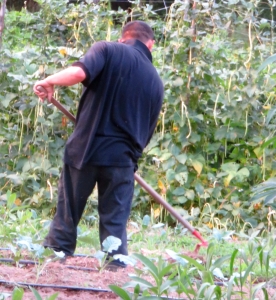 Chapel Hill’s largest refugee community comprises three ethnic groups who fled the country of Myanmar (Burma); a number of them lived in refugee camps in Thailand before they came to the USA. Some 30 of these families have been receiving assistance since 2010 at the Transplanting Traditions Community Farm, through which they are able to grow many of the plants on which they relied as farmers in their home country. The gardens they maintain not only help feed members of their families and community, but also enable them to maintain some of their original culture through dietary customs. The farm also helps the families earn an income through the crops they sell via farmers’ markets and a community supported agricultural (CSA) project wherein customers commit to buying a box of vegetables from them every week.

This evening, the Community offered the general public a chance to tour their gardens and sample some of their traditional dishes, a delightful experience to be sure. When I arrived for the event, I first toured one of the plots with shared vegetable gardens. What first struck me was the large number of birds that were in the garden, including American goldfinches (Spinus tristis), chipping sparrows (Spizella passerina), ruby-throated hummingbirds (Archilochus colubris) and great-crested flycatchers (Myiarchus crinitus) among others.

The air was alive with bird calls and song and as dusk fell, you could see the birds flitting from ground to plant to plant. Butterflies, like this red-spotted purple (Limenitis arthemis astyanax), were also flying about the garden, which had a mix of full-grown vegetables and blossoms promising more crops to come.

Paper wasps (Polistes) and other insects were also plentiful.

The event was co-sponsored by The Conservation Trust for North Carolina, Orange County Partnership for Young Children, and Triangle Land Conservancy, which provided the Community Farm with space in its Irvin Nature Preserve. Representatives of the organizations said a few words about their work and then we were led on a guided tour of a newer part of the Community Farm by Kelly Owensby, the Project Director, and one of the Karen teenagers participating in the project, Joe. 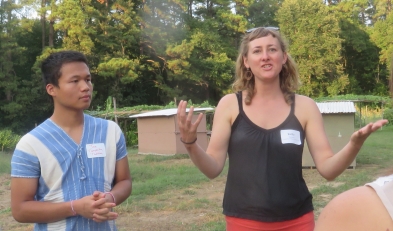 We had some tasty beer, provided by a donor, and were given a bit of the Farm’s history as we walked along the path to the new section.  The 5-acre Farm is on land in the rural outskirts of Chapel Hill and, while it is a wonderful site on this 269-acre Preserve, it is not served by public transportation, a circumstance that has made it impossible for some refugee families to participate in the project. The 30 families that have managed to get there daily, in addition to their regular jobs, have made over $125,000 over the past three years with their produce sales. 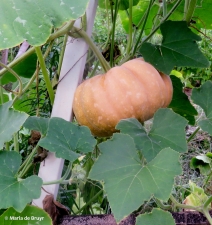 Joe told us about a Karen holiday that are celebrated by these ethnic families here in North Carolina. The wrist-tying ceremony recalls how the Karen people fled through Mongolia a long time ago; elders bind the wrists of young people by winding white thread around them three times wound three times with white string, which wards off misfortune and evil. 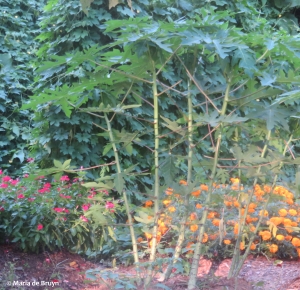 The farmers grow some 40 plants native to Burma. These plants need to be re-planted from seeds each year since the North Carolina climate is too cold in winter for them to survive as perennials. The papayas don’t bear fruit but the Burmese refugees use their leaves in various dishes. Some of the native plants include gourds, turmeric, bitter melons, ginger, taro root, medicinal herbs and lemongrass. Plain green gourds could be seen hanging near spotted water gourds. 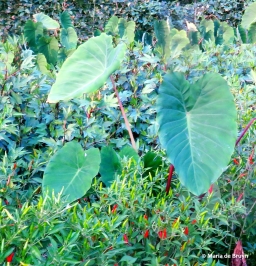 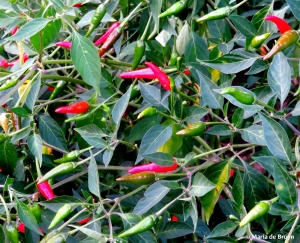 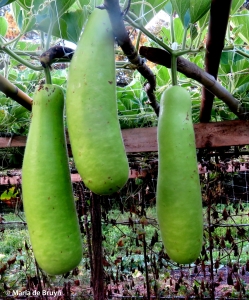 One female farmer had begun growing sesame seed, a crop she had had in her native country and which she was very glad to be growing here. The bamboo trellises are commonly used to suspend gourds and provide shade for crops that need protection from constant sun such as ginger and turmeric.

The farmers are also growing plants native to North Carolina, such as okra. 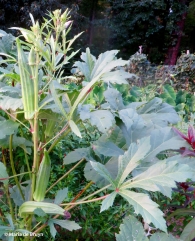 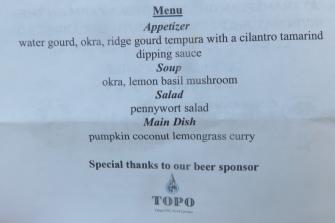 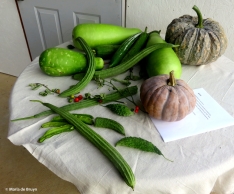 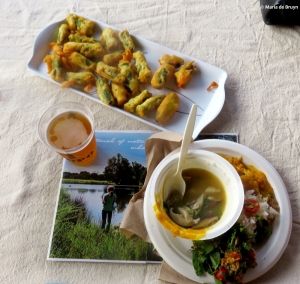 The okra featured alongside water gourd and ridge gourd as part of our meal appetizer of vegetable tempura. We were also treated to a delicious soup incorporating okra along with lemon grass and shitake mushrooms, a delicious and slightly spicy pumpkin curry and a salad with some bitter elements that went well with the other dishes.

I had told four people about this opportunity to sample Karen and other Burmese cuisine but none of them came; they missed a really delicious meal! I hope many more people attend the evening next year.

2 thoughts on “Maintaining culture through plants”