Yesterday my day turned out quite differently from my modest expectations – it was very lucky and truly a day for gratitude.

In mid-August, I had seen a female monarch butterfly (Danaus plexippus) at Sandy Creek Park, an exciting find and testimony to the usefulness of planting milkweed there. John Goebel, Sandy Creek patron, manager and care-taker extraordinaire, had planted about five types of milkweed in anticipation of welcoming these guests and it had paid off.

A few days ago, on Facebook, the Friends of Sandy Creek Park group announced that the one male and two female monarch butterflies spotted in the butterfly garden had left behind quite a few offspring. As I had not seen a monarch caterpillar in person before, I took off early for the park, where I found three people assembled to count them.  John Goebel kindly told me something about the monarch life cycle.

He pointed out several larger caterpillars, noting that they were stage 4 or 5 larva. The eggs hatch about 4 days after being laid. The larvae eat the plant on which they were born, shedding their skins four times as they grow, a process taking 10 to 14 days. These stages of growth are called instars. 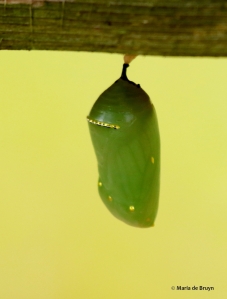 In stage 5, the large larvae look for a protected and hidden spot where they can attach themselves vertically. They use their spinneret (not only spiders have them!) to make a silk pad from which they then suspend themselves, hanging down in the form of a letter J. The culmination of this procedure occurs when they straighten out, a sign, John told me, that pupation was imminent, with the caterpillar turning into a bright green chrysalis. There was already one chrysalis when I arrived with two other caterpillars hanging nearby.

The milkweed plants were attracting plenty of insect action. Many stems were yellow and orange as they were covered with milkweed bug nymphs and aphids. I photographed several of the 43 caterpillars counted, including a small early-stage newbie, and a number of large specimens that were very busy munching on leaves.

After a while, I moved on to photographing caterpillars of moth species and looked around for birds or other interesting insects. Then an unexpected and unfortunate event arose and I had to high-tail it to the bathroom (thank goodness Sandy Creek has one that is open much of the year!).

Emerging from the bathroom and walking down the path to my car to go home, I felt chagrin that my nature walk had to be cut short. But if it hadn’t been for the bathroom visit near the milkweed plants necessitated by my gastrointestinal emergency, I would have missed a first-time experience. As I strolled to my car, I glanced again at the hanging caterpillars and noticed one had straightened out. I balanced the need to go home to shower and change clothes with the desire to see a caterpillar become a chrysalis. I had cleaned myself as well as possible and no one else was around, so I stayed.

The caterpillar that I was watching was hanging quietly on a leaf; the only action came from a small milkweed bug (Lygaeus kalmia) and a large milkweed bug (Oncopeltus fasciatus) that marched back and forth on top, so I turned to the side to photograph an adventurous sibling that had climbed to the top of a nearby plant. 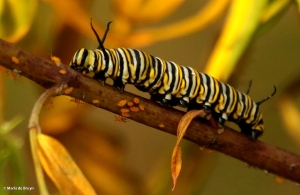 When I looked back, the pupation had already begun and was progressing apace. 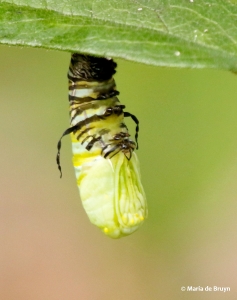 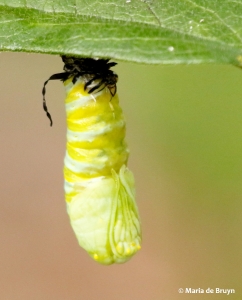 John had mentioned that it could take under a minute; this caterpillar was a little bit slower but the transformation was quick indeed. I’d seen videos of this before but seeing it live in the wild was awesome. And I got my own bit of video showing the last bit of larval skin dropping off the chrysalis.

The large milkweed bug came back to perch over the chrysalis. Later, John moved this chrysalis because the leaf of the plant could fall off before the 10- to 14-day pupation period is over – everyone wants all the larvae to become full-grown adult butterflies who can undertake the long migration to Florida or, more likely, Mexico. Their loss of habitat in both the United States and Mexico is devastating to the species and action to prevent further losses is still needed. 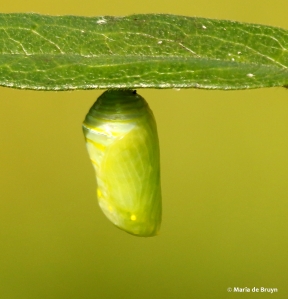 As I again prepared to leave, I noticed that one of the other hanging caterpillars was straightening out, so I decided to wait a little while in the hope I would see a second pupation. After watching one caterpillar approach and climb a nearby tree and seeing another trundling through the grass toward the parking lot (presumably headed for a tree further away), I focused on the hanging caterpillar.

Sure enough, the pupation began – in this case, even more rapidly than the first one I witnessed. 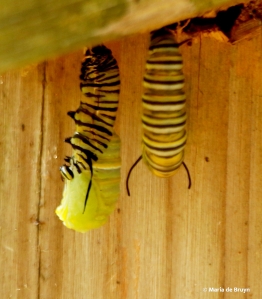 A difference with this transformation was that the last little bit of caterpillar did not drop off but remained suspended at the bottom of the chrysalis. Most likely, it will fall off later, which is important; if it remains attached, it could damage the emerging butterfly.

Watching this part of the butterflies’ metamorphosis was an exciting event. I didn’t wait fora third pupation, however, as I really did need to get home. On the way back, I nearly had a collision with another car – perhaps leading the other driver to need a shower, too. At home, I later almost fell on my face as one of my cats wound himself through my legs as I walked so that I came very close to tripping. Both accidents in the making didn’t happen, thank goodness, so maybe the monarch pupae had become my guardian angels for the day. In any event, I did have lots to be thankful for!