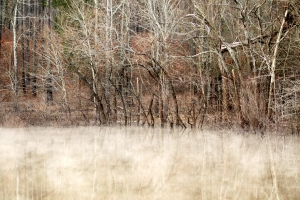 Spending two cold early mornings at Jordan Lake the past couple weeks reinforced my conviction that getting out into nature is a restorative and calming activity. And it doesn’t need to be warm. Although a doctor pronounced me healed after my recent hospitalization and home treatment, it turns out that I’m not completely healthy after all. Starting a new treatment was a bit stressful, but seeing the birds at the lake was a joy.

Mind you, I’d love to see other wildlife there, but the mammals, reptiles and amphibians have been hiding out or keeping away from areas frequented by people. The fact that it is still hunting season probably makes some of them somewhat shy, too. I did manage to see a fly on one morning though.

The animals do leave behind signs of their presence, however. Tracks in the sand is one give-away that they passed by. 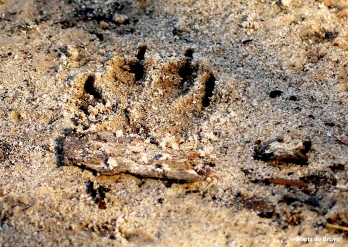 The beavers (Castor canadensis) leave behind distinctively gnawed tree stumps – and here you can also see one tree that they haven’t quite finished felling yet.

The shoreline vegetation was decorated with gull feathers in various areas of the lake. 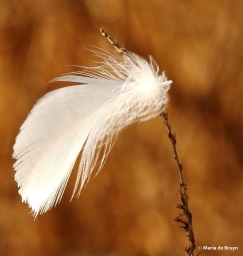 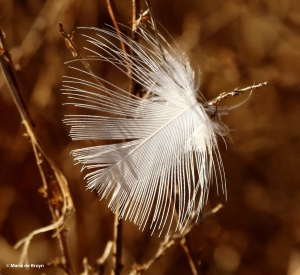 A sandy track of what I assumed was a great blue heron (Ardea herodias) didn’t produce a bird at that site, but I saw these beauties in flight at two other sites.

At one area, I spotted a bird that seemed unfamiliar just as it was turning to take off. Friendly birders online identified it as an American pipit (Anthus rubescens), the first time I had seen this species (known as a “lifer” among the birding crowd). The next week I saw a killdeer (Charadrius vociferous) in the same spot but got a better shot. 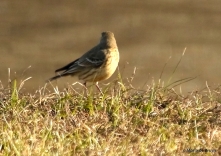 The killdeer didn’t hang around too long either, but I was able to get a couple of nice flight photos this time.

The American crows (Corvus brachyrhynchos) were foraging in the shoreline woods, while the song sparrow was looking for food among the woody detritus left at lakeside.

In another place, the crows were very loudly making their presence known – it turned out that a red-tailed hawk (Buteo jamaicensis) was perched nearby and they were making sure everyone knew the hawk was there.

In the trees near the lake, various birds could be seen: the ruby-crowned kinglet (Regulus calendula) was very busy as usual, flying from a sweet gum (Liquidambar styraciflua) to other trees in rapid succession. 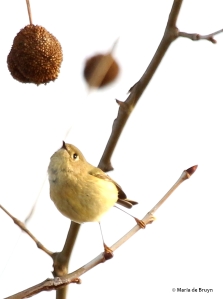 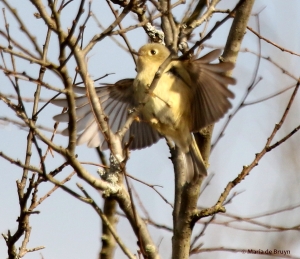 At one site, there were many dark-eyed juncos foraging on the ground and taking pauses in the trees and shrubs around. Juncos are actually a type of sparrow and a group of sparrows is known by several names: a crew, a flutter, a meinie, a quarrel and an ubiquity.

Overhead, the double-crested cormorants (Phalacrocorax auritus) flew by; they would land and share space with the ring-billed gulls (Larus delawarensis). 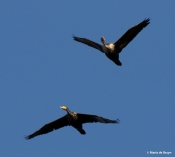 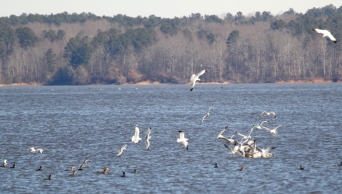 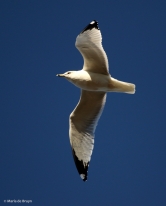 The ring-billed gulls were numerous and occasionally one swooped down to fish not too far from shore.

While I was watching, the horned grebes (Odiceps auritus) were more successful in getting meals as they dove into the cold water.

A couple times I was very surprised by a bird that suddenly seemed to emerge out of nowhere to fly over my head or just in front of me. That was the case with a beautiful male wood duck (Aix sponsa) and a belted kingfisher (Megaceryle alcyon).

An adult bald eagle (Haliaeetus leucocephalus) soared by just as I was approaching an observation platform in one area; the distance and height were considerable but I managed a shot. A Bonaparte’s gull (Chroicocephalus philadelphia) flew by a little lower, while a Carolina chickadee (Poecile carolinensis) sat still for a portrait.

My last avian companions during my latest lake walk were a white-throated sparrow (Zonotrichia albicollis) and a lovely hermit thrush (Catharus guttatus). 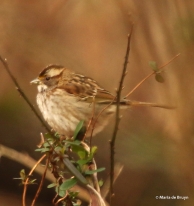 I returned home on both occasions a satisfied birder!