During my trip to Yellowstone National Park, I had the privilege of seeing what birders call “lifers” – bird species that one sees for the first time. One spectacular sighting – for me – was of sandhill cranes (Grus canadensis). I didn’t spot them first; I was traveling with two photographers from Michigan who were used to seeing these beautiful birds in their backyards. We had already passed but they kindly returned so I could take a few photos – and then to our delight, the pair of birds performed their mating dance for us!

These birds mate for life and may live to a considerable age. The oldest known sandhill crane was 36.5 years old. 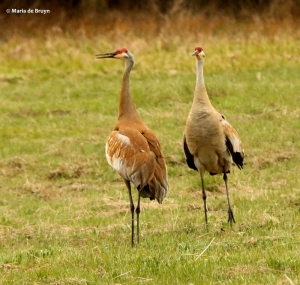 While many of these birds are grayish in color, some have rusty orange coloring, attributable to iron-rich mud in their environment. In Yellowstone, the birds use their long bills to spread the reddish mud over their feathers when they preen and this helps to camouflage them when nesting. Cranes that are not yet mature also have reddish upper parts. Their heads are topped by a red patch. 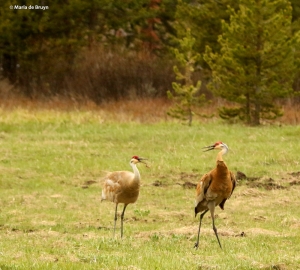 These birds have very long legs and necks as you can see. Their windpipes curl up in the sternum and give their sounds a lower pitch. Mated pairs will sing in unison, with the female calling twice for every call that her mate makes.

The males dance when they display to one another. Courtship dances can involve bowing followed by leaps into the air. They may stretch their wings and pump their heads as well. 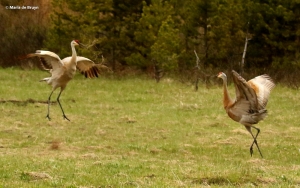 Perhaps some ballet terminology was inspired (unconsciously) by the graceful cranes.

Grand jeté (jump from one foot to the other)

Demi-plié (Half-bend of the knees) 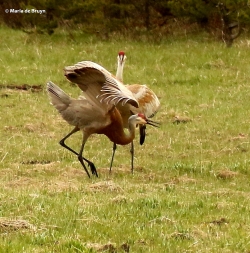 Dancers have tried to mimic cranes and while they created a beautiful dance, the sandhill cranes had more varied moves. 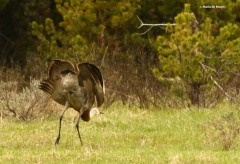 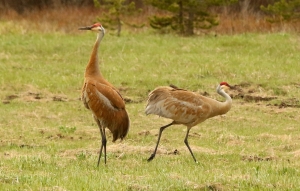 The courtship dance was a tour de force and a highlight of my first day at this national park. In hindsight, I wish I had taped it but I was so enthralled, I forgot. 🙂

4 thoughts on “The dance of the sandhill cranes”