Birds are a favorite photographic subject of mine, even though catching them in late spring and summer is challenging when the lush foliage offers them many places to hide. Their songs and calls and warbles tell me that they are there, but often I need to wait quite a while until I finally catch a flutter of movement out of the corner of my eye to locate them.

One early morning, when the moon was still in the sky, I was fortunate enough to see a lot of fluttering in trees near the park’s parking lot – and I discovered an immature white-eyed vireo (Vireo griseus) with a parent who looked as if she or he was really practicing forbearance. 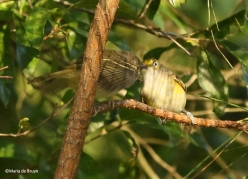 Nearby, a Carolina wren (Thryothorus ludovicianus) was singing loudly; these little avians have an outsized voice so that you can hardly miss them even when they are hidden behind leaves.

A handsome male goldfinch (Spinus tristis) was in a field, while a female was visiting the coneflowers (Echinacea), of which there were various species in the cultivated butterfly garden. 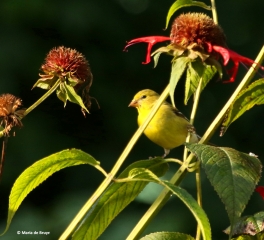 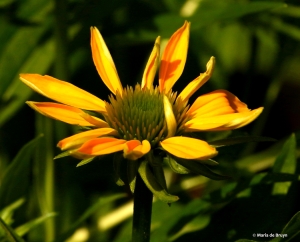 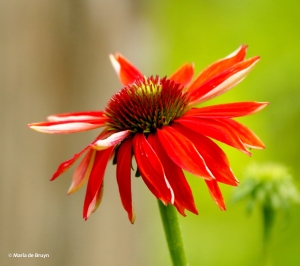 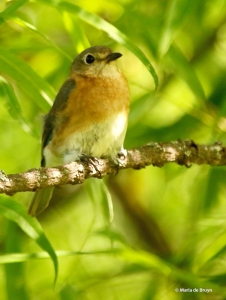 The common grackle (Quiscalus quiscula) scored a meal, while the pine warbler (Setophaga pinus) and blue-gray gnatcatcher (Polioptila caerulea) were busy in the trees searching for caterpillars and insects.

Other birds (and mammals, I think) had been getting crayfish from the ponds but I guess there were so many that they only ate the tastiest parts. 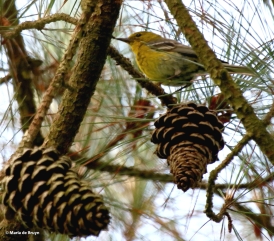 The American robins (Turdus migratorius) were looking for earthworms on the ground, and the song sparrows (Melospiza melodia) alternated between the ground and shrubs in their search for food.

The male red-winged blackbirds (Agelaius phoeniceus) were calling and flying from shrub to shrub, showing off their handsome black plumage with a red highlight. 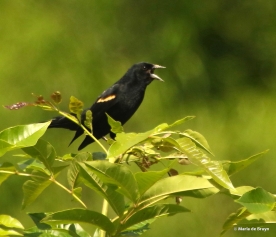 Over at a nearby pond, the Northern rough-winged swallows (Stelgidopteryx serripennis) were swooping over the water and then sharing space on a snag; meanwhile, a mother wood duck (Aix sponsa) led her brood along the shoreline. 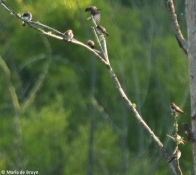 In a tree beside another pond, the immature great blue herons (Ardea herodias) were still at their nest at the start of June; later in the month, they were no longer hanging out there. 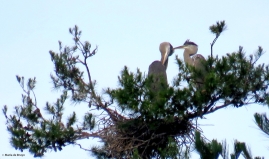 Botanists can have a great time at Sandy Creek, too. The milkweed plants in the butterfly garden attract both butterflies and bees.

Carolina horsenettles (Solanum carolinense) are common but pretty little plants, while the orange jewelweed (Impatiens capensis) enjoys a good reputation as having stem juice that relieves the pain caused by poison ivy for many people. 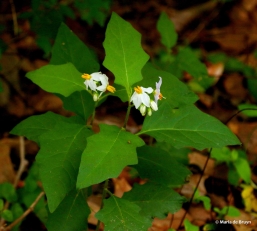 The fairywand (Chamaelirium luteum) grows profusely on the edges of Sandy Creek ponds and the swamp rose (Rosa palustris) sprouts near them as well. 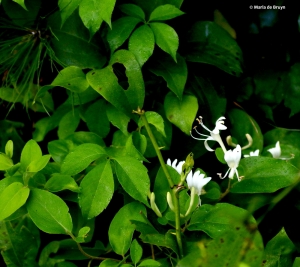 In the fields, you can see lovely brown-eyed Susans (Rudbeckia) and coreopsis. 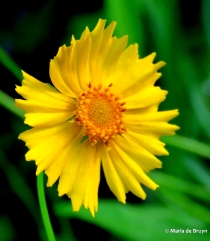 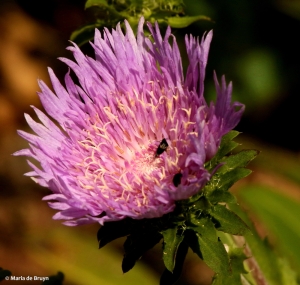 The cultivated garden in the park gets plenty of color from the Stoke’s asters (Stokesia laevis) and red bee balm (Monarda didyma), which is a real magnet for hummingbirds. I recently bought a couple for my home garden and was rewarded with seeing the hummers visit them within 2 days.

What makes my walks so interesting is discovering new species. A native grass (Bromus) was lovely; helpful facebook group members gave me suggestions for possible species but we couldn’t narrow it down. The group also helped me identify a plant that I hadn’t seen before, a Germander (Teucrium canadense).

I managed to find an ID myself for a common flower that seems to grow all over the place – the Asiatic dayflower (Commelina communis). It is considered an invasive plant and is on the watch list for North Carolina, but I have to say that I find it quite attractive. Each flower blooms for only one day and to me they look like little faces and make me smile. And so I continue learning as each new walk invariably ends up teaching me something new. Enjoy your day!