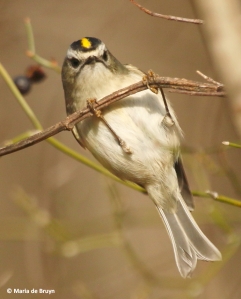 Litter boxes scrubbed, bird feeders filled, other chores waiting but I’ve decided to end my blogging hiatus on this rainy and somewhat gloomy Sunday morning. This and my next blog will feature two of my favorite birds and then I hope to treat you with a nesting saga as spring is well underway.

With a lovely ruby-crowned kinglet visiting my yard every year for the past four years, I’ve developed a particular fondness for this tiny avian species. This past autumn and winter, my partiality expanded to include their jeweled cousins, the golden-crowned kinglets (Regulus satrapa), who seemed to have favored our geographical area with an irruption (an ecological term for a sudden increase in an animal population). Whereas in previous years, I felt lucky to catch a glimpse of a golden crown during their months-long stay in North Carolina, they appeared to be everywhere this past winter and in full view to boot.

The golden-crowned kinglets are about the same size as the ruby crowns and similar in overall body color except that they also have a black eyebrow stripe.

While the ruby-crowned males only flash their red crests when mating or upset, however, the golden crowns have a permanent yellow stripe atop their heads. 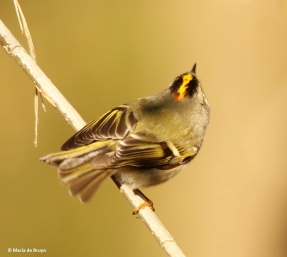 The male golden crowns can sometimes be distinguished by the fact that there will be a hint of red in their golden crest. 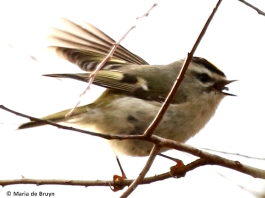 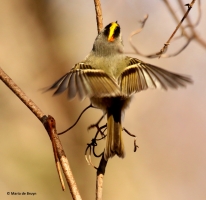 Like the ruby crowns, these little insect foragers are in constant movement as they scour branches, shrubs and plants for a meal. Their varied diet includes beetles, flies, crickets, butterflies, spiders, and bees and wasps. In the winter, they will also eat some seeds. 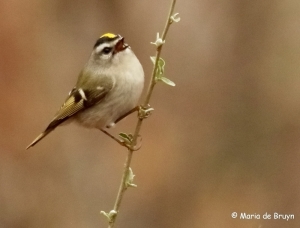 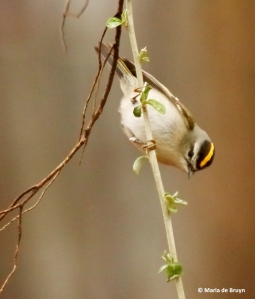 Searching for the insects often means they hang upside down from branches as they look at the underside and in crevices for their next bite to eat. 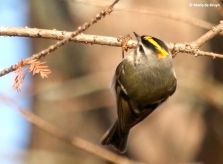 They also hover mid-air to snatch an insect or fly.

The golden crowns sometimes sit still a bit longer than ruby crowns so that you have a chance to get off a few photographic shots before they resume their dietary searching. And this year, one of those photos placed me among the winners in a small local competition. 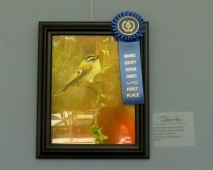 These birds are not much bigger than hummingbirds, but like the hummers, they also undertake a long migration twice yearly. Their winters are spent throughout North America but for breeding they travel to the far North and mountainous Northwestern areas of this hemisphere. 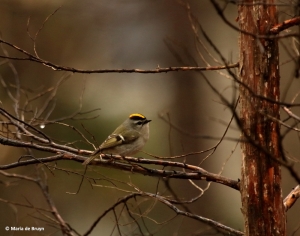 This year, many places had mild winters but if they arrive in the North before spring-like temperatures arrive, they are able to survive nights as cold as –40 degrees; sometimes, they huddle together to keep a bit of warmth. Their lifespan is several years, with the oldest recorded golden crown being a banded male who was at least 6 years and 4 months when he was recaptured in Minnesota in 1976.

This species prefers life in coniferous forests but it seems if a few spruce and pines are around, they will settle in. I saw them in a small and somewhat sparsely vegetated area near a senior center, an arboretum, along the Haw River, and in the woods and bogs of various nature reserves.

In the United States, the number of golden-crowned kinglets declined 75% between 1966 and 2014. Habitat loss has contributed to this. However, spruce reforestation in the Eastern USA may have contributed to a more recently seen increase in numbers of kinglets. I’m very glad that they are not (yet) an endangered species and I hope we get to see them a lot next winter, too!

2 thoughts on “Back to blogging with the golden crowns!”