Recently, I had the good fortune to see a sea duck because it had veered away from its usual habitat to land on a pond near the middle of North Carolina. The male long-tailed duck (Clangula hyemalis) is a real looker in his winter plumage. His dark grey bill is tipped by bright pink color and he has large black circles on his white cheeks, which some people think look a bit like ear-muffs. 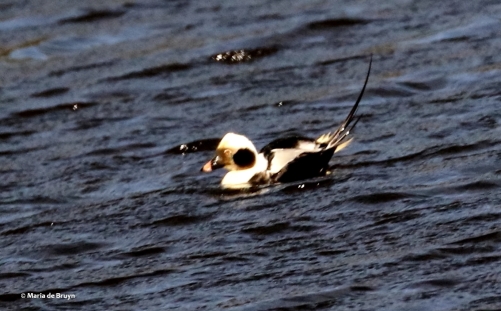 According to the Audubon Society, these ducks dine on mollusks and crustaceans when they are at sea during the winter. Since this duck had apparently gotten off-course during his winter migration, he seemed to be satisfied now with pondweeds and grasses, which is what they tend to eat in the summer when they are at their breeding grounds.

It is his beautiful long tail (3.9 to 5.9 in, 10-15 cm) that really catches your eye, especially when he dives under to gather up some of his food. His dive appeared to comprise a very slight spreading of wing feathers and then a quick forward and downward movement, ending with his rear end sticking up with the long-tailed plume waving a bit before he straightened out just below the water’s surface.

It was when I watched this duck dive under again and again that I actually stopped to think a bit about how ducks dive for their meals. This bird seemed to stay under water for what seemed a very long time (probably 15-30 seconds). It turns out that they can remain submerged up to a minute. In comparison to other diving ducks, the long-tailed duck spends more time under water than at the surface; in fact, when looking for food, this duck will be under water 3-4 times longer than it stays above water! 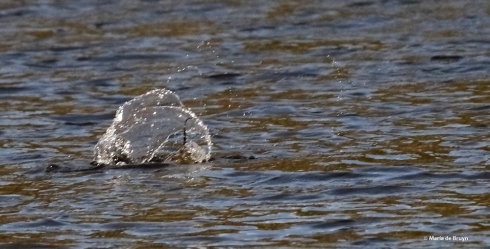 When reviewing my photos, I realized that this bird was not diving deep but rather staying submerged just under the surface. My friend Lucretia pointed out that the duck would extend his wings a bit away from his body before he went under and the photos showed his wings spread out.

This must be the species’ diving technique when they are foraging for plant material because it turns out that they are likely the deepest diving ducks in the world, able to go down as much as 200 feet (60 meters) in search of food! So it turned out that we were really seeing quite a special bird.

A pair of bufflehead ducks (Bucephala albeola) were at the same pond and give a nice demonstration of their different diving technique. Their winter and summer diets are similar to those of the long-tailed duck; they, too, seemed to be eating plants during our visit. Their dives were of much shorter duration; they appear to stay under water “only” 12-25 seconds at most.

In contrast to the long-tailed duck, however, they would rear up a bit over the water and then arch their bodies in a graceful dive, popping up again quickly after swallowing their food. 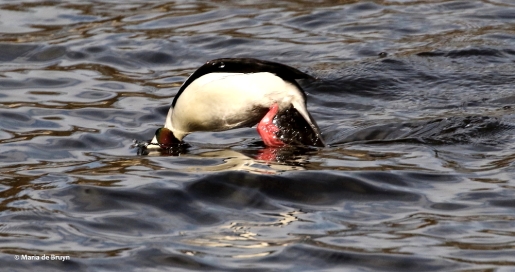 It’s interesting to note that their Greek genus name comes from a term meaning bull-headed, while their common name came from a combination of the words buffalo and head. The male duck can puff out his head feathers, making his head look even larger.

Another duck that can do this is the male hooded merganser (Lophodytes cucullatus); the female can also extend her head feathers, giving herself a crested appearance.

The male and female are quite different in appearance, but both are attractive. Their diet appears to be mostly crustaceans and mollusks.

A female merganser at nearby lake gave a short diving demo the same day as the long-tailed and bufflehead ducks. She, too, tended to perform a shallow dive like the former duck. 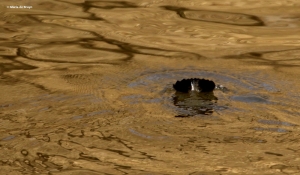 Duck watching had not been one of my preferred birding activities but now I’ve become curious as to how other species are executing their underwater forays. Perhaps the arcing-body plunge is a bufflehead specialty – I’ll have to pay more attention to diving techniques from now on! 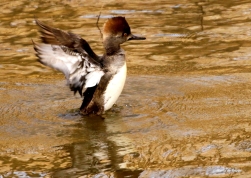 5 thoughts on “Diving in for a meal”