When our small band of independent travelers was formulating a plan last year to go to Tadoussac Dunes in Quebec to see the spring warbler migration, we all began investigating the area on the Internet. One of my first discoveries was that several species of whale live in the St. Lawrence Seaway, including the beautiful and rare belugas (Delphinapterus leucas). I began advocating that we include whale-watching options in our itinerary and fellow birder Chloe was also VERY enthusiastic! We were well rewarded during the actual trip, even though it was early in the season for these migratory cetaceans to be there.

On our first afternoon exploring after arrival in Quebec province, we stopped by a shoreline to look at birds and saw a shop for a whale-watching company. A lady working for the firm pointed out a herring gull sitting on her nest nearby and we had the pleasure of seeing our first harbor seal (Phoca vitulina) in the small cove next to the nest.

The next afternoon, we visited the Parc National du Fjord-du-Sanguenay. A 3.2-km trail led us through forest, along a couple meadows and inlets to the Baie-Sainte-Marguerite where belugas are often seen in the summer. Part of the trail was bordered by rocky areas with running rivulets of water nourishing mosses and other vegetation. 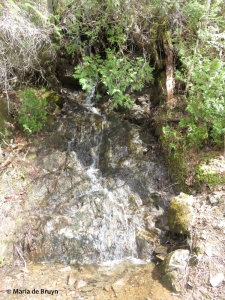 Many plants were growing in the rocky areas along the trail, including beautiful red trilliums (Trillium erectum L.), red osier dogwood (Cornus stolonifera – thanks to Lynda for the ID!) and trout lilies (Erythronium americanum). 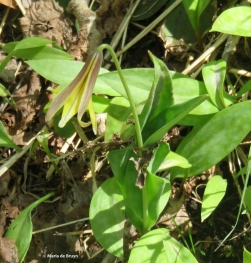 Signs along the way told about the history of the Bay Mill village which had been built alongside the bay. Sawmill residue was used to fuel a steam engine, which in turn gave the village electricity.

Visitor center staff informed us that no one had seen belugas recently in the bay but we had a beautiful land-based view of the water. 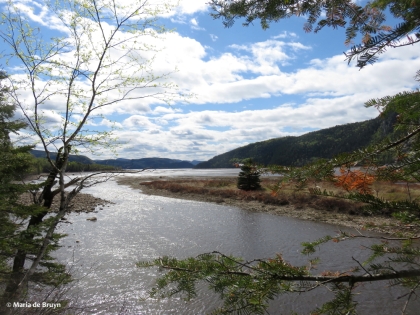 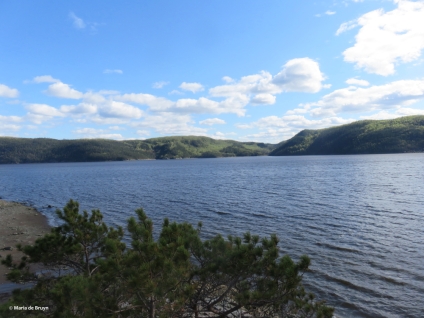 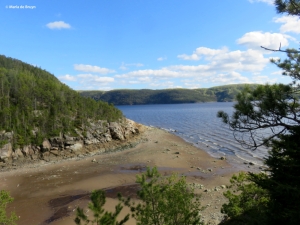 The Sanguenay Fjord (water-filled valley carved out by glaciers) is unique in that it is the only navigable fjord in North America. The fjord is characterized by water stratification, with the bottom layer being as cold and saline as ocean water while the top layer is warmer fresh water, so that this area contains both saltwater and freshwater ecosystems.

There was a nice exhibition area with informative signs; in the summertime, a park ranger is stationed there to provide tourists with additional information. For example, we learned from the display how specific belugas have been identified so that naturalists can follow their lives over time.

The next day, four of us went on a whale-watching tour, which ended with a visit to the Sainte Marguerite Bay from the water side. No belugas were to be seen but to our great delight, there was a pod of harbor seals which had hauled up onto the rocks. “Hauling” is actually a “technical” term for seals getting out of the water temporarily for purposes such as avoiding predators, resting (also when molting, which I didn’t know they did) and engaging in social interactions. 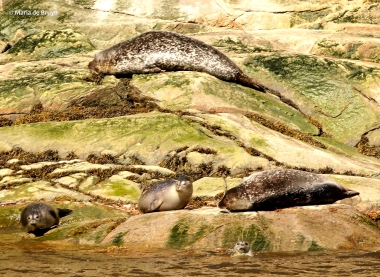 They tend to hang out in familiar haul-out spots; this family group seemed relaxed, with some members sunning and others swimming nearby.

It is said they are easy to recognize by the sunbathing pose that they adopt, called the “banana pose” – lying on their side with head and flippers raised. No one in this group demonstrated the pose, however!

They mostly eat fish but also squid, shrimp and mollusks. Their color may vary from gray to brown, with some looking a bit more spotted than others. 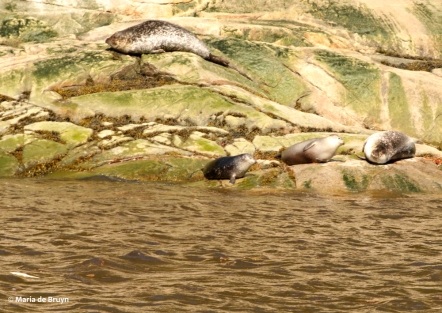 We were lucky to see them since they migrate from eastern Canada to breed along the Maine coast in May and June. Occasionally, a few have been seen in North Carolina. And now on to the whales in aquatic mammal blog part 2!