When a hummingbird other than a ruby-throated hummingbird (Archilochus colubris) is seen in the Triangle area of North Carolina, it is listed as a rare bird on the Cornell Lab of Ornithology listserv. One year, I did have a chance to see a buff-bellied hummer visiting in a nearby town though; another year a rufous hummer frequented my own feeders in the winter. Mostly, however, it is the ruby-throats who take up residence at my address, which is just fine as these feisty tiny birds provide loads of entertainment. 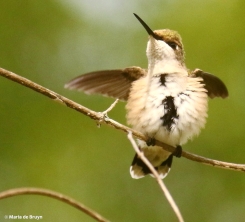 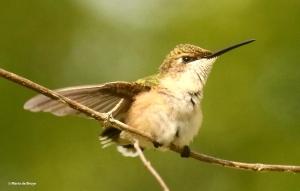 During a trip to Quebec earlier this year, we also saw ruby-throated hummingbirds there – early arrivals during the spring migration. 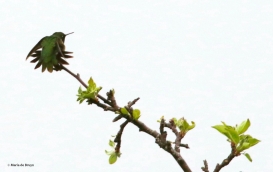 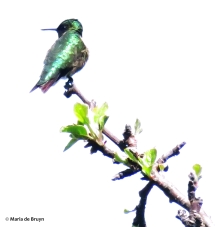 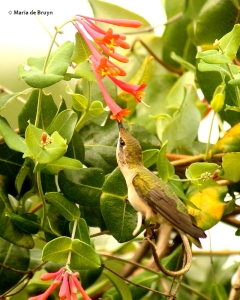 A few years ago, one of my blogs focused on their preening and cleaning, so this time I’ll mostly feature some of my favorite photos of them taken this summer in various places. (When looking through the shots, I had a LOT I liked, so this is now going to be a 2-part blog!)

At Sandy Creek Park in Durham, one female hummer had made a coral honeysuckle (Lonicera sempervirens) one of her preferred dining spots. 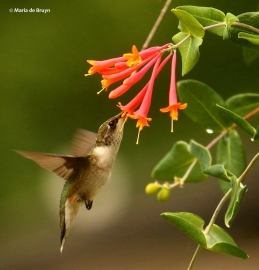 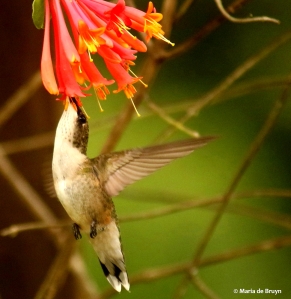 A butterfly garden featuring blue-black sage (Salvia guaranitica) and bee balm (Monarda) also attracted her and some other hummers. 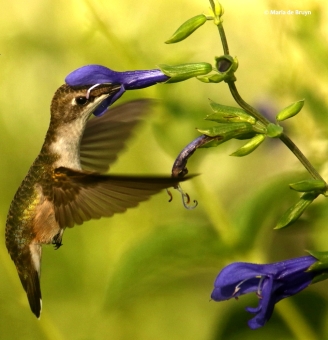 One female found the bee balm to be a good place to rest, understandable since these bundles of energy have a high metabolic rate. Their hearts beat up 1260 times per minute and they take about 250 breaths per minute even when they are resting! Taking a few sips while remaining perched has to be a welcome luxury. 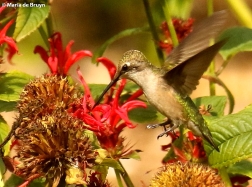 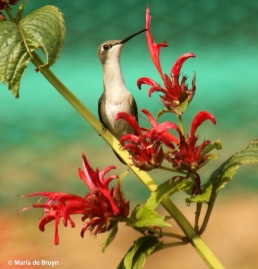 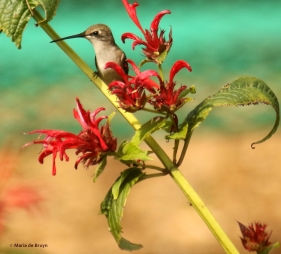 The hummers’ main wing bone, the humerus, is adapted to hovering flight and they have very large deltoid pectoral muscles relative to their size. 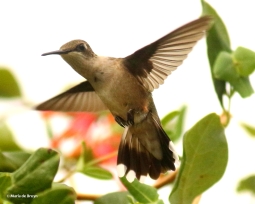 Male birds produce sperm that flows through the vas deferens (sperm duct) to the cloaca. When they mate with a female, they transfer sperm by touching the tip of their cloaca to that of the female; they do not have a penis. Females only have a functional left ovary; the right one atrophies early in her development, which allows her to avoid the extra weight of a second ovary and makes her lighter for long migratory flights.

One big treat for me this year was finding two ruby-throated hummingbird females tending a nest, the first time I had been able to spot this. 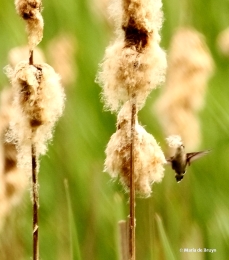 Later, I was able to take a quick photo of one female collecting cattail fluff with which to line her nest.

Even when several ruby-throats are frequenting an area, the (temporary) coloring of their feathers can help distinguish them. This young male had a few olive-green dots under his eye and a bit of white on the crown of his head.

A somewhat more mature male has a little white patch behind his red gorget.

They are all little beauties! Second part of this blog is coming up and then on to Costa Rica!