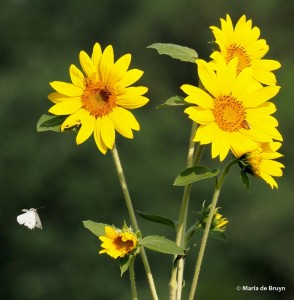 Last month, many residents of the county where I live were alerted to the eruption of profusely blooming sunflowers that were attracting both birds and people. The avians were looking for tasty seeds, as well as bugs attracted to the blooms, and the humans were seeking beauty and backdrops for photo portraits.

Sunflower fields are so popular in our area that they feature on the TV news and in online tourism guides. The NC Museum of Art has sunflower fields and offered a sold-out Sunflower Photography Workshop.

Many birds love sunflower seeds, but it can be difficult to see the foragers as they may be dining at blooms lower down on stems. The bright blue indigo buntings are sometimes easy to spot but I couldn’t get photos of them feeding. Red-winged blackbirds (Agelaius phoeniceus) and American goldfinches (Spinus tristis) will often perch atop a bloom to peck away at the ripening seeds. 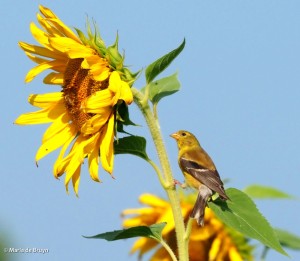 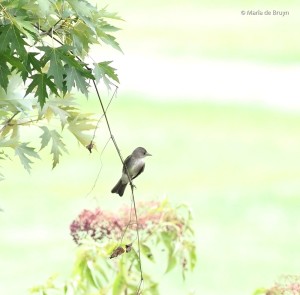 The Eastern meadowlarks (Sturnella magna) flitted about in nearby meadows. I didn’t see them among the sunflowers.

It’s not only the birds and people that like sunflowers, however. A field of these flowers is a boon for pollinators. The Orange County fields that I visited featured hundreds of butterflies. The most numerous were the orange sulphurs (Colias eurytheme).

As I watched, pairs of sulphurs would often flutter around one another, ascending high up in the air. It was interesting to see that two types of female orange sulphurs were present. Some were yellow-hued like the males; others were whitish in color, known as the Alba variant. 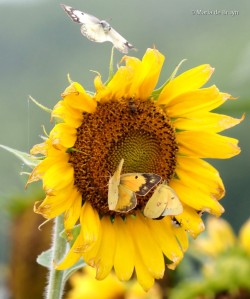 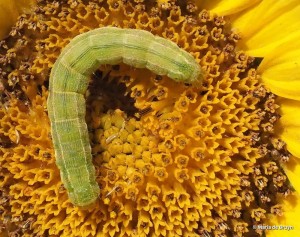 Another abundantly present butterfly species were the cabbage whites (Pieris rapae), which were accidentally introduced into North America around 1860. They didn’t seem attracted to the sunflowers per se but instead were fluttering around and landing on the other flowering plants mixed in with them.

Of these small butterflies had me stumped for an ID at first; it was yellowish in color and didn’t have prominent black spots. However, an entomology expert on BugGuide assured me that it was a cabbage white.

Various types of skipper butterflies were feeding on the sunflowers. 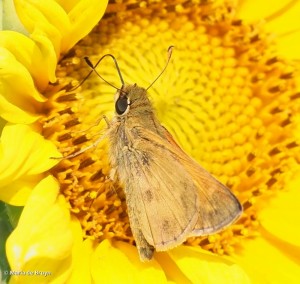 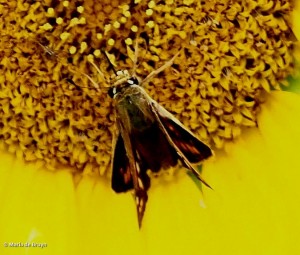 There were a few variegated fritillaries (Euptoieta claudia) visiting the sunflowers and an occasional black swallowtail (Papilio polyxenes) fluttered into view as well.

Both the cabbage whites and orange sulphurs were visiting muddy spots at a nearby pond.

This behavior is known both as mudding and mud-puddling and occurs when the butterflies are looking for certain nutrients in mud and rotting plant matter.

Observations have indicated that most of the puddling butterflies are males who often appear to be ingesting salts and amino acids. These substances seem to improve the males’ reproductive success and they transfer these compounds to females when they mate. The nutrients then contribute to the survival of the deposited eggs. Wouldn’t it be interesting if human males could transfer nutritional benefits to offspring in that way?

A latecomer to the puddling parties was a lone common buckeye butterfly (Junonia coenia Hübner). This species generates several generations of offspring each summer and I’m always pleased to see them in my own yard. 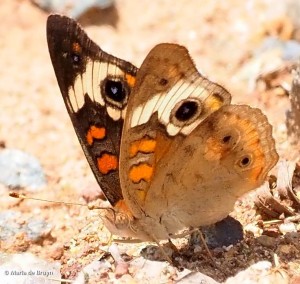 Next blog: the sunflower field visit continues with some other numerous visitors!