My first blog on this website, written in October 2013, focused on woodpeckers; my first blog of 2020 was also about these birds (I know, the blog prior to that says 1 January but I posted it on 31 December; WordPress time is ahead of mine. 😊) Obviously, they are one of the bird species that I enjoy watching so to follow up my last blog, I’d like to share just a few more photos of three species that it’s my privilege to see locally. They are quite different from one another in appearance but equally beautiful and it’s always a delight to see them. (And no, it’s not snowing where I am; this is a photo from January 2018; we are supposed to have 70⁰ F/21⁰ C in a couple days!) 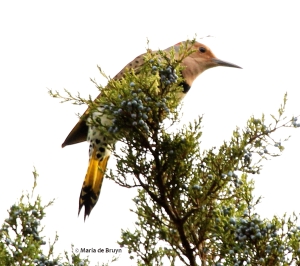 The Northern flicker (Colaptes auratus) is found in the Western hemisphere and looks quite different from many other woodpecker species. In the US, there are two sub-species. In the West, there is the red-shafted and in the East the yellow-shafted variant. The “shaft” refers to the undertail feathers. When the bird flies, however, you can also see the beautiful, otherwise hidden, yellow hues on the underside of other feathers.

Those yellow feathers also come into view when the flicker is upset, like this one was with a brown thrasher who came to the feeder pole where it was taking a brief rest. (This is pretty unusual; they don’t come to the feeders often.) 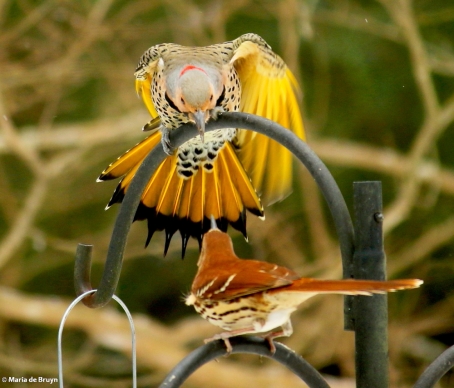 The flickers have some interesting distinguishing features: they are one of the few woodpeckers that migrate; they are the only woodpeckers that primarily searches for food on the ground, rather than in trees; and they probably eat more ants than any other North American bird!

And, depending on the weather (overcast, cloudy but light, sunlight), their coloring can look different – this is not only because the photos were with different cameras).

They also eat berries and seeds in the autumn and winter. 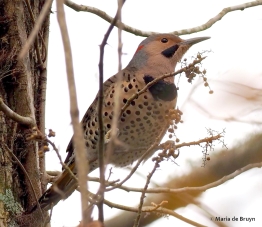 Like other birds, the flickers do nest in tree cavities. 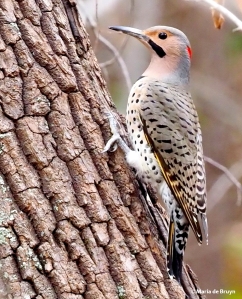 You can distinguish males from females by the black moustache stripe, which the females lack. 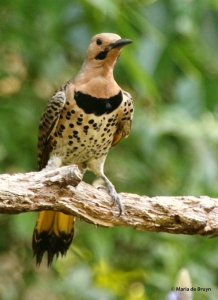 The yellow-bellied sapsuckers (Sphyrapicus varius) is a woodpecker that can blend in quite well with the trees on which it seeks its food. Their mottled feather coloring often provides a good camouflage and you might not see one if it is sitting still.

The males have red crowns and red throats; the females have a white throat and the juvenile birds lack the reddish hues. 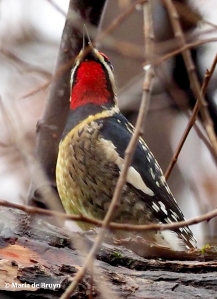 These woodpeckers may be followed around by other birds. For example, last year I saw ruby-crowned kinglets following sapsuckers at one reserve. Why would they do this? It’s because the sapsuckers drill shallow holes into trees which will then ooze out sap on which the woodpeckers and other birds feed. And the kinglets will find insects around the sweet sap. (At a children’s workshop on trees that I conducted last fall, one young boy asked me if humans could also drink the sap from their holes. I hadn’t researched that but answered that perhaps we would like the sap from a maple tree but not from an oak.)

The sapsuckers eat insects, berries and fruit like other birds. 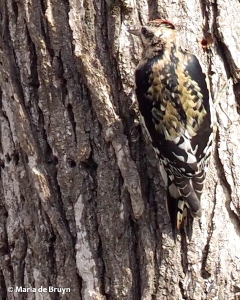 Last in my line-up of local woodpeckers is the red-headed woodpecker (Melanerpes erythrocephalus). The adult males and females look alike but adults and immature birds look very different indeed. While the mature birds are characterized by a deep red head, solid black back and white rump and belly, the juvenile and immature youngsters have brownish heads and bodies and black and brown striped rumps. 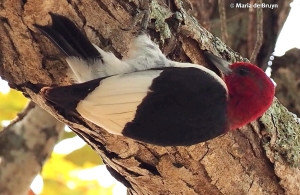 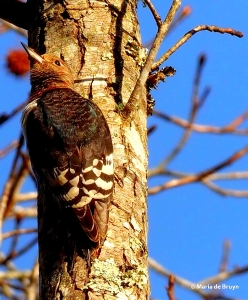 When they are transitioning to adult plumage, they will have mottled red heads and begin losing the brownish hues. 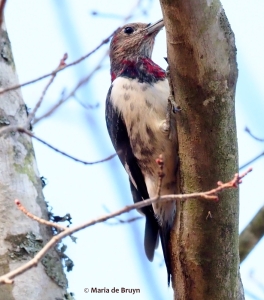 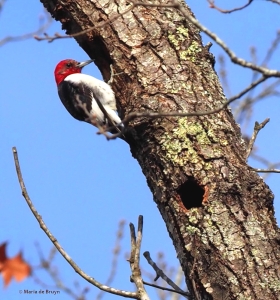 They have one of the most identifiable (for me) calls of the woodpeckers. Listen to this recording (Arkansas, 22 March 2005); it almost has a warbling quality to my ear, which many websites describe as a “churring” sound.

I’ve been lucky lately as there is an immature red-head reliably patrolling a certain territory in a forest that I visit so that I can be fairly certain of always seeing her/him sooner or later. This is a boisterous bird who loves to call and make its presence well known. 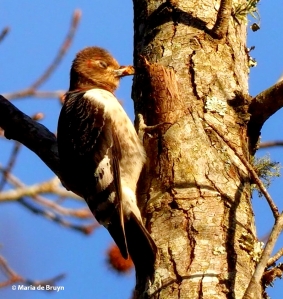 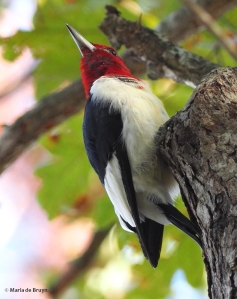 S/he doesn’t peck too loudly but if some vigorous drilling is required, this bird is up to the task. They have sturdy and powerful spike-like bills. The woodpecker beaks have three layers: the rhamphotheca (outer layer) is made of keratin; the middle layer is porous bone and the inner layer is made of mineralized collagen and contains a large cavity. The tongue bone (hyoid) winds around the bird’s skull and functions like a safety belt that helps cushion the brain when they are engaged in high-velocity and impact drumming and drilling. On the whole, however, these woodpeckers tend to drill less but fly out often into the air to catch insects on the wing.

They eat insects, fruit, berries, eggs of other birds but also really enjoy nuts, especially acorns and beechnuts. They make stashes of nuts in tree cavities, crevices and under bark for later consumption.

When depositing or withdrawing from holes in trees, they will use their tails like other woodpeckers to help them balance as they perch. 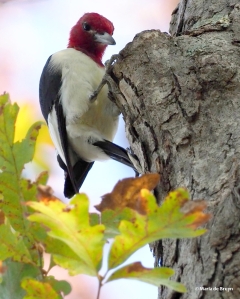 A surprise for me was that they also occasionally eat cambium and tree bark. 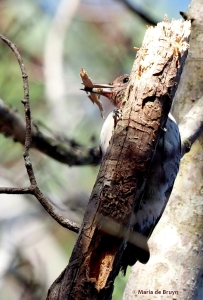 If climate change continues and results in an overall warming trend of plus 2 degrees, these birds could lose up to 64% of their range. Yet another reason to do what we can to decrease our energy consumption and advocate for policies and regulations to reduce global warming due to human actions.

One more interesting note about woodpeckers (for the time being): did you know that there are no woodpeckers (including flickers and sapsuckers) in the polar regions, Australia, New Zealand, New Guinea and Madagascar?

I’ll end with a quote from an interesting book that I am currently reading. The author, Robert Macfarlane, describes research into the “wood wide web” and then muses on what it could mean for humans:

“If there is human meaning to be made of the wood wide web, it is surely that what might save us as we move forwards into the precarious, unsettled centuries ahead is collaboration: mutualism, symbiosis, the inclusive human work of collective decision-making extended to more-than-human communities.” (Underland; my emphasis)