As I sit here in the 34 ⁰C/93 ⁰F temperature, a memory of cooler weather in Quebec this past spring beckons. So here we go back to the birding trip I took with some friends at the end of May/start of June. While I was able to see several “lifers” (birds I saw in person for the first time) during that trip, there were also a number of birds I had seen here in North Carolina (NC) but who were now getting ready for breeding on their summer grounds. These included some aquatic species, like the American black ducks (Anas rubripes, above), who interbreed with mallards, and a lovely pair of American wigeons (Anas americana), who are one of the more vocal duck species. 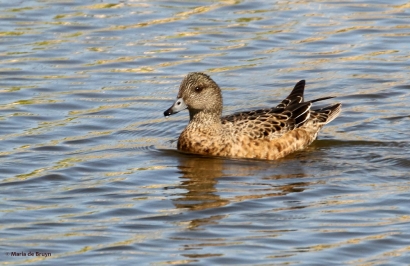 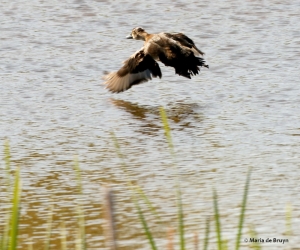 At one pond, I surprised a female ring-necked duck (Aythya collaris), who took off in a flurry of wings. These ducks tend to prefer small bodies of water as resting and feeding areas. Later that afternoon, I caught sight of a male counterpart at the far side of another pond as our car passed that body of water.

The spotted sandpiper (Actitis macularius) is a shorebird I have seen with some regularity in my home territory in NC. The Northern harrier (Circus hudsonius), which I don’t see as often, is nevertheless a familiar bird.

The double-crested cormorants (Phalacrocorax auratus) would fly by on the St. Lawrence Seaway from time to time. I see them often in NC but had not seen the somewhat unusual-looking (to me!) surf scoters (Melanitta perspicillata). The male has what has been described as a swollen bill with patches of white, red and orange color contrasting with its black feathers. 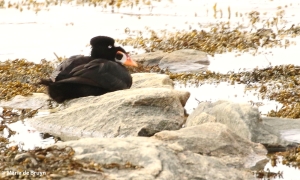 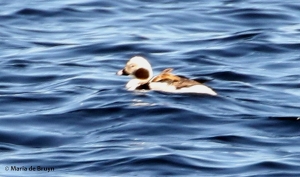 A duck that I had seen for the first time in North Carolina, when one paid a rare visit to a lake in our area this past winter, was the long-tailed duck (Clangula hyemalis). These deep-diving birds breed along Northern sea coasts, lakes and on tundras. There were two males swimming at one place that we stopped – one was in its breeding plumage while the other still sported its winter feathers (with a large round black spot on its face, above). Our local birding pal speculated that the winter-plumage bird might not have been completely healthy and was therefore not going to breed. 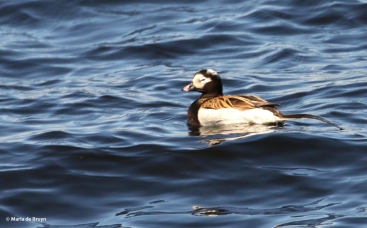 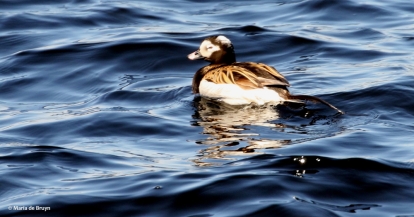 A female long-tailed duck was very busy in the meantime diving under water, although she was apparently looking for food close to the water’s surface rather than diving deep (i.e., up to 60 m or 200 ft). 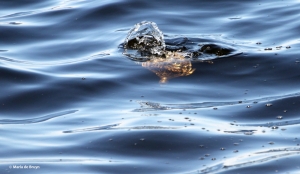 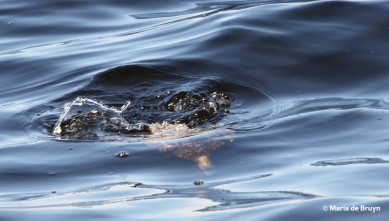 The water was really beautiful, looking almost velvety to me as it undulated in gentle movement with the long-tailed ducks and a common goldeneye (Bucephala clangula) riding the swells. 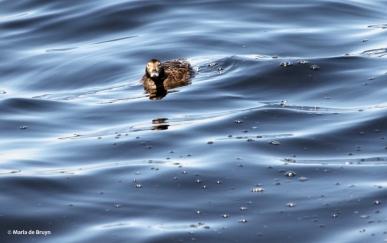 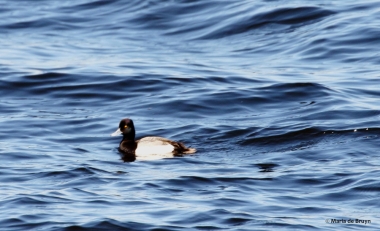 On several occasions, we were lucky to see common eider ducks (Somateria mollissima) in the distance. Eider down, which has been used to stuff humans’ pillows, comes from the female duck’s breast and is intended to be used in lining her nest. Nowadays, there are communities in Norway that protect the birds’ nests, eggs and young so that they can later harvest the down from the used nests.

A group of common murres (Uria aalge) flew by one day and, like the eiders, were added to my list of Quebec lifers. The murres are a type of auk, birds that can swim and dive wonderfully but have an awkward gait when walking on land. The murres don’t breed until they are 4 or 5 years old, in contrast to many other birds.

A really beautiful water bird, which I unfortunately was not able to photograph beautifully, was the common loon (Gavia immer). When the light hits its head and neck feathers in the right way, they have a beautiful green-blue iridescence. With its checkered back pattern and white-and-black striped collar, these birds make me think of someone getting ready for a formal dining party, i.e., they are well-dressed avians! 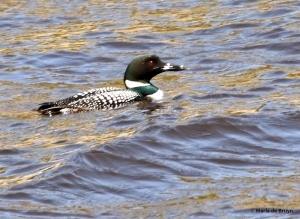 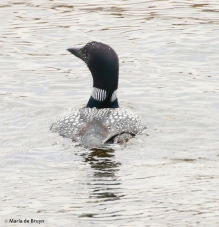 We only saw a Canada goose a couple times during our stay in Quebec but did get to  see another species, the brant goose (Branta bernicla). This species almost died out along the eastern coast of North America when their main food, eelgrass, suffered a blight. The birds changed their diet to include sea lettuce and this proved to be a good survival strategy. 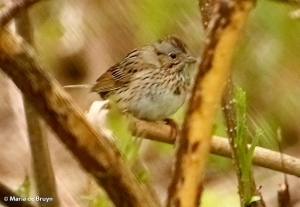 On land, one afternoon I spotted a sparrow in the garden of a private home. Though I couldn’t get too close, I got an identifiable photo and learned it was a Lincoln’s sparrow (Melospiza lincolnii), which I had not seen before. This species was named by James John Audubon for his friend, Thomas Lincoln, who shot one of the birds during a trip they took together in 1834. (Obviously, one of the sadder aspects of birding in Audubon’s time.) 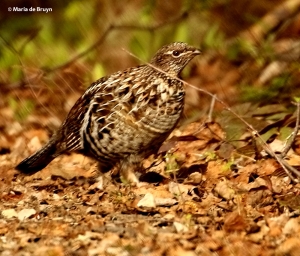 Another, much larger bird, that I got to see for the first time was a ruffed grouse (Bonasa umbellus). These birds can be found in Appalachia, but it was only in Quebec that I was able to view these birds three times.

They tend to walk around much of the time but also fly up into trees to forage. We saw them in quaking aspen trees (Populus tremuloides); it turns out that dormant flower buds of male aspens are a major food source for the grouse in winter and early spring. 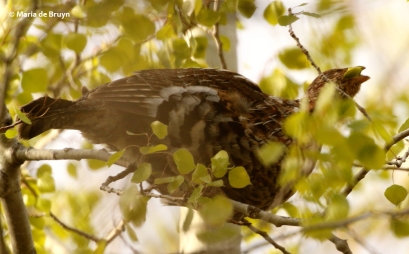 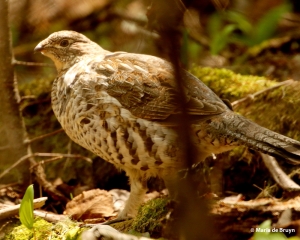 Unfortunately, these birds have been succumbing to West Nile virus in some of their habitats.

Finally, two birds that we saw in great abundance were birds that also appear with regularity on birders’ lists in NC. 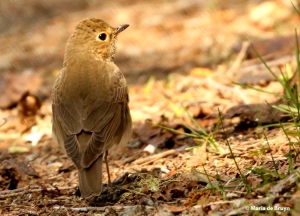 According to the Cornell Lab of Ornithology, it is far more likely to hear than to see the Swainson’s thrush (Catharus ustulatus); however, it seemed these birds were out and about at every place we stopped.

The initial excitement at seeing one slowly turned into remarks of “oh, another Swainson’s” as one, two, three or more of these charming birds worked the meadows and trail paths looking for sustenance. 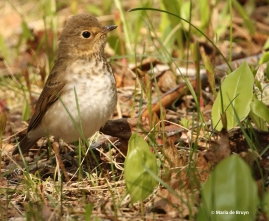 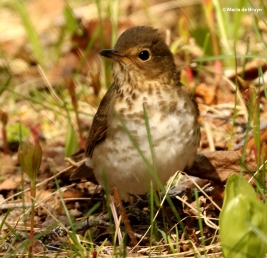 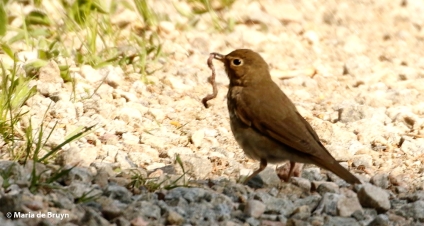 The same thing eventually happened with our sightings of least flycatchers (Empidonax minimus), one of the smaller birds of its type. These birds like to snatch their meals from the air but will also glean insects from leaves and twigs. 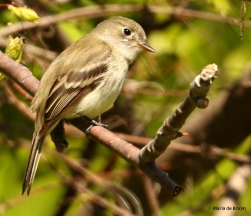 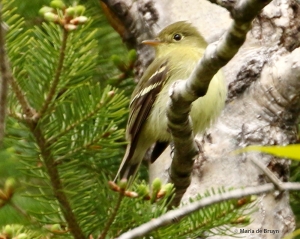 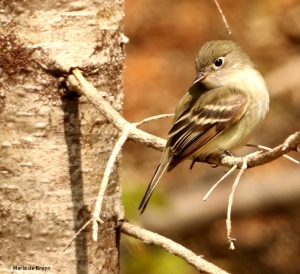 What I did find is that these small companions on our walks were quite charming and cute, so I didn’t tire of seeing them again and again.

Next time: some of the non-avians we saw in the Canadian province!