As I was sorting out photos of birds in our recent snow and sleet storm, my attention was drawn by the raucous cawing of one of our neighborhood crows. He had found some apple slices that I had put out with the bird seed and was one happy bird. He spent a lot of time calling, presumably to alert family members to the presence of this desired food source. And his enthusiasm made me decide to post a blog about corvid courtship now, since this late winter/early springtime ritual may be coming sooner than I thought.

Depending on geographic location and weather conditions, some birds begin nest building quite early in the year and American crows (Corvus brachyrhynchos) are among the early mating pairs and nest builders. Last year, a male crow who visited my home discovered and enjoyed both grape jelly and apple slices around early March.

He even tried to add the homemade suet to his diet but he was a bit large to balance well on the small feeder.

Last year, he only had to visit my yard a few times before he was accompanied by his mate. She would sit on a branch or on the ground and caw loudly like him, but she was demanding that he feed her. 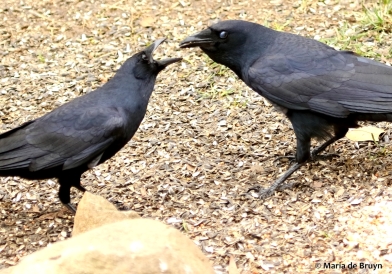 He met her demands but was not about to just give up his treats. He would often grab a piece of apple, fly up to a branch near her but then first eat about half of it himself as she continued her raucous cries for food.

She could have easily flown down to the ground to grab a piece of apple but refused. On a few occasions, she did fly down but just refused to pick up the apple herself, waiting for him to stuff it down her throat.

He fed her in the trees and on the ground, pushing the food way down her throat.

Some preening went on as they perched in the backyard oak tree, too. 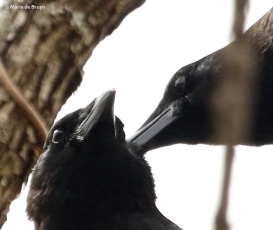 .I learned that offspring will remain with their parents up to five years. These “helpers” will assist in feeding the female as she incubates eggs and also bring food to their new siblings.

It seems that our warm days in December and January this year may be getting my faithful crow in a romantic mood a bit sooner this year.The crows are loud, especially when three or more show up at a time, but I do enjoy their visits and look forward to watching the corvid courtship again this spring.