As I mentioned in November, ruby-crowned kinglets (Regulus calendula) are one of my favorite bird species. These tiny, yellowish bundles of energy are fascinating to watch as they perch on twigs, hover in mid-air by feeders and branches, and generally look delightful when they stop to catch a breath for a minute.

Adjusting your camera to be able to photograph them with the best speed and lighting can be quite challenging as their constant motion leads them in and out of the sun and above and below branches. 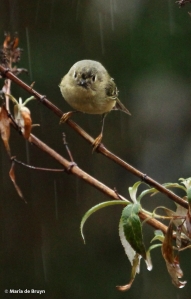 On a rainy day, they may sit still for a tiny bit longer but their flight is not impeded though they may look waterlogged.

This has been a good autumn and winter for my being able to photograph these adorable avians, not only in my yard at the feeders but also in venues such as the Jordan Lake woods, Mason Farm Biological Reserve and Sandy Creek Park. This blog will focus on some of the portraits I’ve been able to capture. 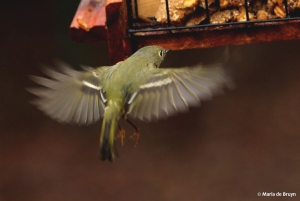 When they are flying around rapidly, you could mistake them for first-year, less brightly hued blue-winged warblers (Vermivora cyanoptera). That happened to me in South Carolina where I thought I had gotten a shot of a blue-winged warbler and instead saw a kinglet in the photo. 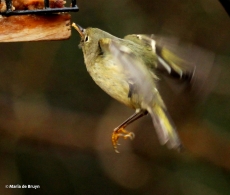 The kinglets’ yellow-olive color, white wing bars, broken white ring around their eyes and fluttering flight help identify them. Very occasionally, you catch sight of the red crown or get a peek at a couple of the normally hidden red feathers.

The Latin species name, which means little king, has led to a number of “royal” terms for a group of kinglets: a castle, a court, and a princedom. My favorite, however, is a dynasty – a grand description for a collection of these tiny fliers.

I think I might have a particular fondness for birds with black or dark legs and yellow feet. I love snowy egrets (Egretta thula) with their large feet resembling yellow rubber gloves and melt at the sight of those dainty kinglet feet.

It’s amazing to think of these small birds migrating to North Carolina from as far North as Canada and Alaska. Just think about how many wing-beats and how much energy this demands of these birds! I’m glad they make the trip though! 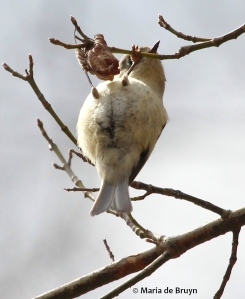 I hope you have found these photos as cute as I did – have a great day!