On the last day of January 2019, I thought it would still be ok to post a couple blogs on some surprises I encountered the past year. Almost always when I go out on nature walks, I encounter something new – a species of wildlife or plant that I have not seen before or an interaction between species not previously observed. So, I wanted to share a few of those delightful surprises from 2018. In this blog, I focus on birds; in the next part, other kinds of wildlife will be featured.

As I mentioned in a previous blog, my own front yard was the scene of my biggest surprise last year when a snowstorm brought feeder visitors whom I had never seen before and who rarely come to the state where I live. The evening grosbeaks were just stunning. 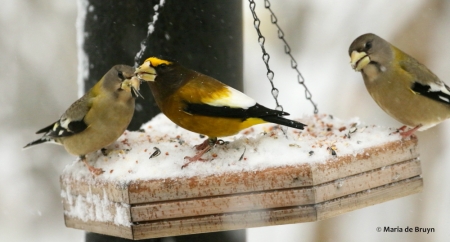 They were not the only grosbeaks who treated me with their beauty, however. I’ve had rose-breasted grosbeaks (Pheucticus ludovicianus) visit the feeders before, but they still always elicit my appreciation with their bright colors. 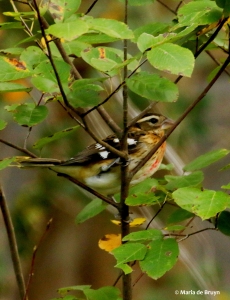 In late October, an osprey (Pandion haliaetus) made me stop for a photo as the other birds of its species had already gone south for the winter. The bird was perched on a branch extended over a pond and had to unfortunately contend with a persistent crow that was harassing it. After some time, the sea eagle finally took off with the crow in pursuit – it seemed that the osprey might have injured its wing and perhaps that accounted for a delayed departure to warmer climes.

Although the pursuit photos are not high-quality, you can see a gap in the osprey’s wing and perhaps it was waiting for healing before it undertook a very long journey.

On another day, I was near a wetland when an unexpected visitor flew onto a branch above me. Green herons (Butorides virescens) usually keep their distance from me; I regretted that it was overcast and the lighting was not wonderful for my close-up portrait of this colorful immature bird.

A more muted bird, but lovely nonetheless, is the Northern mockingbird (Mimus polyglottus). When I saw this individual in late December, I was thinking that it must be difficult for them to find food as the vegetation shrivels and insects are in hiding. At that moment, the bird dropped to the ground and was foraging – coming up with a bug to prove that they still could find sustenance in the cold temperatures!

The mockingbirds are often solitary except for breeding season. Some people complain that they are aggressive towards other birds at their feeders but those in my yard are not that way at all. They share space at feeders and don’t chase anyone else away. When it is mating and nesting time, however, they can become quite territorial and are very protective of their nests. This seasonal “grumpiness” was brought home to me one day along a country road when I witnessed a pair of mockingbirds driving a third bird – rival? Intruder? – away from their roosting spot. 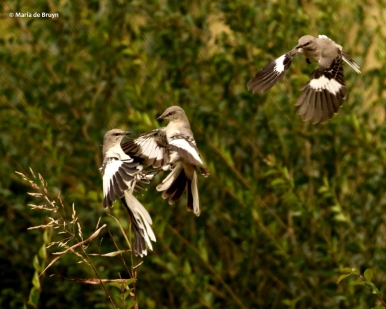 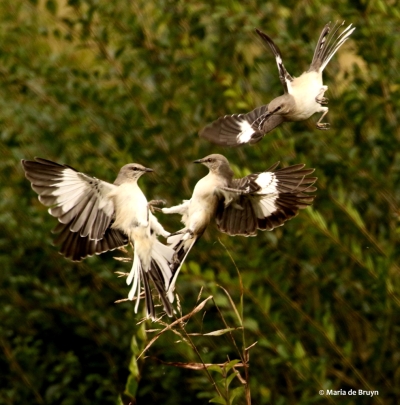 When large flocks of gulls and double-crested cormorants (Phalacrocorax auratus) visited a small local lake because of a shad die-off, I had the chance to watch them for a while. One day, it was interesting to observe how one cormorant wanted to jump up on a floating platform, but another bird didn’t want him/her there. They faced off with open beaks – the bird wanting to get out of the water won. 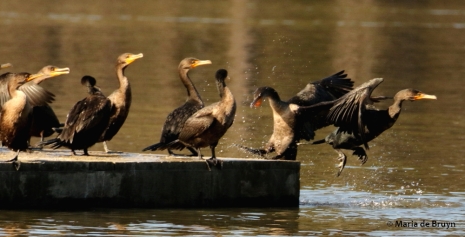 It’s always interesting to me to watch birds as they forage for sustenance. When I think of woodpeckers, my thoughts immediately turn to nuts and insects, which I think of as their staple diets. So it was a surprise to me to see this red-bellied woodpecker (Melanerpes carolinus) dining at length one day on nice ripe persimmons – a bird with a sweet tooth! 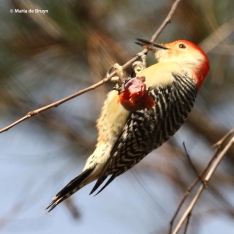 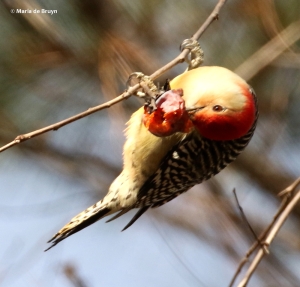 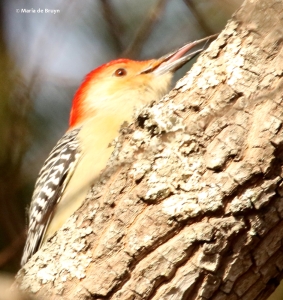 Well, I probably shouldn’t say “sweet tooth” but “sweet tongue”. Woodpeckers don’t have teeth but they have exceptionally long tongues that can be wrapped around their brains inside their skulls when not being used to extract insects and other food morsels from crevices.

Another bird that has a long tongue is the great blue heron (Ardea herodius). One day, I came across this bird on its favorite roosting log obviously trying to dislodge something that had gotten stuck – or perhaps something that tasted foul. I hadn’t really seen the species’ tongue before, so the bird gave me some good views. 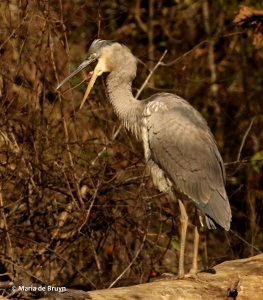 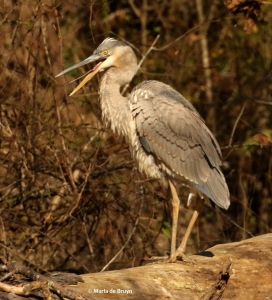 The effort of shaking its head also led it to protect its eye with the nictating membrane. 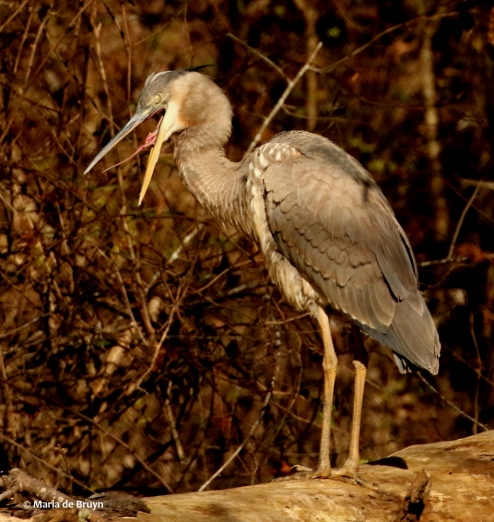 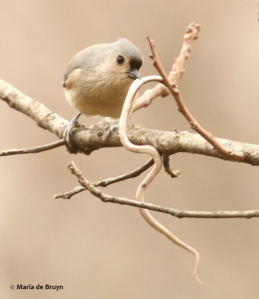 Because tufted titmice (Baeolophus bicolor) visit my bird feeders daily to get nuts and, to a lesser extent, seeds, I associate them completely with that type of diet. It was that assumption that made me do a double-take when I spotted a titmouse on a walk with a long spaghetti-like object dangling from its beak. It didn’t seem like a grass stalk so when I lifted my camera to look through the zoom lens, I discovered it had a worm snake (Carphophis amoenus amoenus) in its beak – a finding that really did astound me.

As I took photos, the bird finally flew further away and unfortunately dropped the reptile when it came close to a creek. I felt a bit guilty, thinking I might have disturbed its meal but after waiting about 5 minutes, the bird suddenly flew up with the snake back in its beak! It obviously really wanted to hang on to that prize! 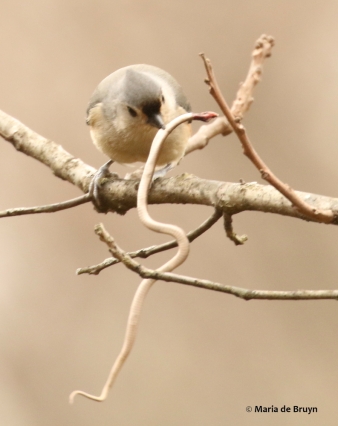 And now on to part 2 of my 2018 surprises – some more reptiles and amphibians, bugs and mammals!