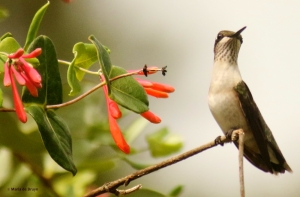 In my yard this summer, the ruby-throated hummingbirds (Archilochus colubris) came late to the feeders (similarly to what other people in the area had reported). Now, there are at least four vying for the four feeders, claiming territory for their own.

One bird in particular is most likely to be seen enjoying the garden flowers, including blue-black sage (Salvia guaranitica) and hot lips salvia (Salvia microphylla ‘Hot Lips’). In the first two photos below, you can see as his throat starts to bulge more as he sucks up the sweet nectar to complement his mostly insectivorous diet. 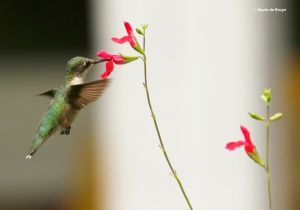 The airborne nectar droplets indicate that sometimes this hummer is a messy eater — or must leave quickly as another hummer is almost literally on its tail.

A couple of the birds spend a lot of time near the nectar feeders, perching close by to chase off anyone who comes near. 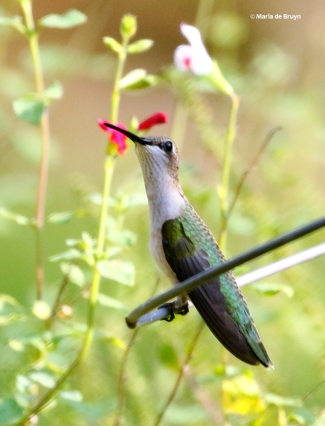 They each have favorite perching spots from which they can observe if an “intruder” is coming near the feeder they have claimed. 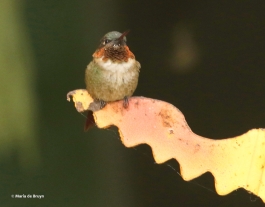 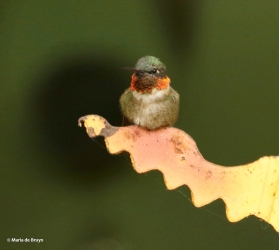 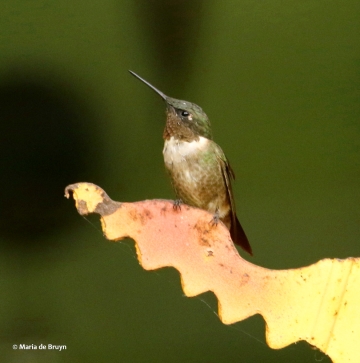 Sometimes, they fly up to a higher perch so they can see both the front and back yards – a necessary vantage point if they want to keep an eye on where everyone is. 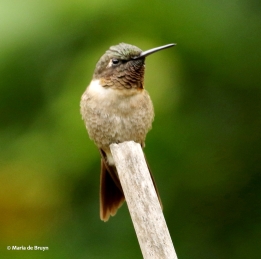 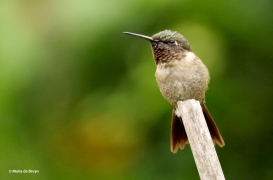 Most ruby-throats have 940 feathers, all of which are replaced each year. As they take little rests, they stretch their feathers and may also groom them.

When a rival approaches, they spread their rectrices (tail feathers) – both when sitting and in the air.

Their feathers are beautifully arranged, looking like scalloped decorations.

They make frequent trips to the feeders and then occasionally “air out” their tongues. 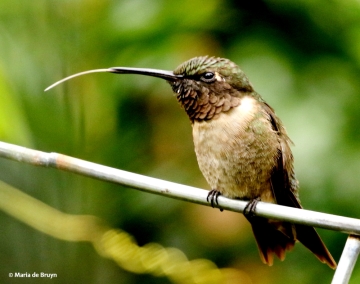 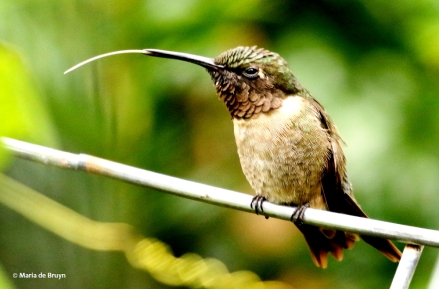 The bill of the ruby-throated hummingbird is one of its most distinctive features. It measures about 0.59-0.79 in (15-20 mm) in length and is said to open no more than about 0.39 in (1 cm wide) at the tip. The hummers in my yard seem to be able to open their mouths to varying extents, however. They consume nectar by extending and contracting their tongues up to 13 times per second. 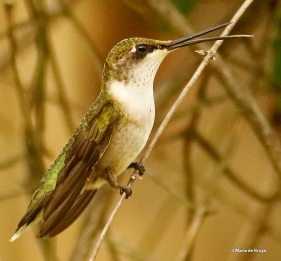 A quick, only few-second nap is also a frequent behavior. The hummers are almost constantly at the feeders and thus bulking up for their long migration, but they also expend considerable energy chasing one another away from feeders and flowers! 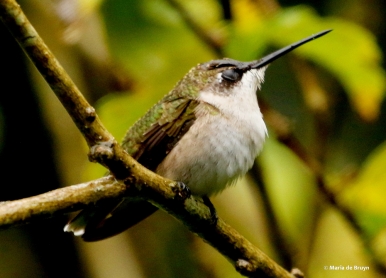 The hummers are not fazed by weather, zipping around rain or shine. Putting on weight and strength for their autumn migration down south is important for survival!

These minute marvels are such a pleasure to watch; I will certainly miss them when they begin their journeys to their wintering grounds.

For a short time, I wrote a column for the community newsletter called Southern Neighbor.