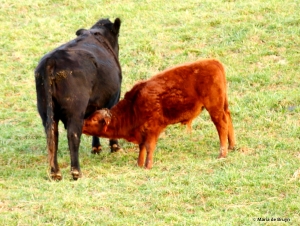 To continue the saga of Braeburn Farm, I’d like to introduce you to some of the non-avian wildlife to be found there. As a vegetarian, I’ll admit I was originally a bit reluctant to go there, but I must acknowledge that the farm management does many things to give the cattle a good life. 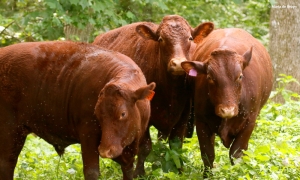 They keep their herd of Red Devons (Bos taurus) to about 300 animals and allow the calves to reach the age of at least 3 years. Some cows and bulls are allowed to grow much older (10-12 years or more) and they enjoy a peaceful life before they go to market, rotating through the farm’s varied habitats, which include meadows and fields, ponds, woods and creeks. No pesticides are used in the habitats and the vegetation is allowed to grow as naturally as possible. Farm manager Nick said that when it is time to shift the cows to a new pasture area, he just calls them. The older cows know that they will be enjoying fresh and different veggies so they follow him willingly, leading the rest of the herd along.

My visits in June and July showed how this farm is cultivating biodiversity among plants and wildlife. The fields were dotted with thistles, white clover (Trifolium repens), red clover (Trifolium pratense) and many other plants. 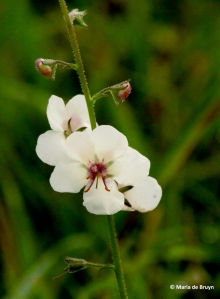 Bees and butterflies were abundant, showing that the farm’s methods are good for the pollinators. 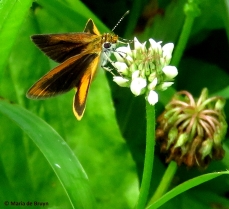 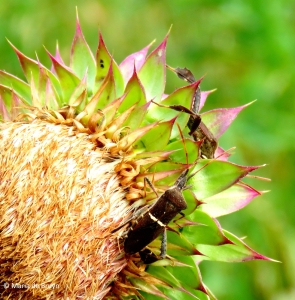 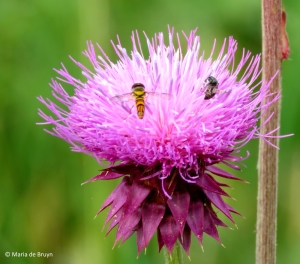 Elsewhere, the nymph of a wheel bug (Arilus cristatus) moved along large leaves. 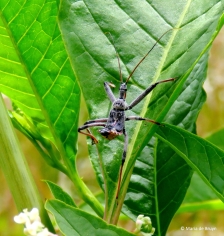 It pays to look down at your feet as you wander through the fields in the early morning. The grasses are covered in tiny webs that glisten with water droplets. Underneath are the tiny red dwarf sheetweb spiders (Florinda coccinea) that may show themselves if you stay very still. 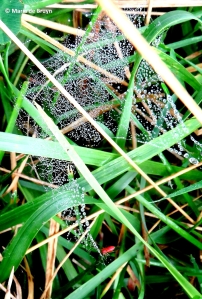 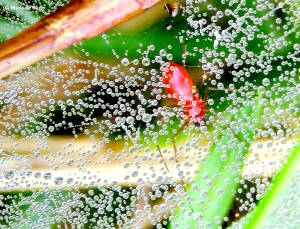 In the vegetation below you can also see other insects, like the Spur-throated grasshopper (Melanoplus), or the Forage looper moth (Caenurgina erechtea). 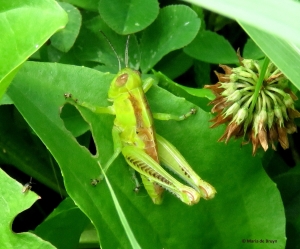 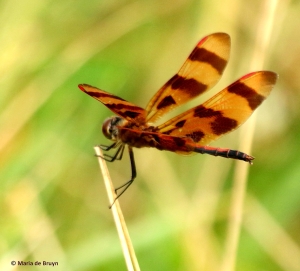 At the creek crossings, you may see a common sanddragon dragonfly (Progomphus obscurus, a lifer for me!), paper wasps (Polistes) or a viceroy butterfly (Limenitis archippus) having a drink or looking for a mate. The viceroy mimics the monarch but can be distinguished easily with the line crossing its wings horizontally when you see it rest. 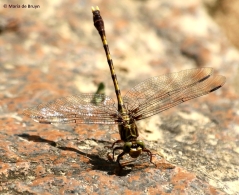 Walking through the fields, you may also occasionally spot a mammal although they are not as easy to see as the other wildlife. As I trudged around a pond, this white-tailed deer fawn (Odocoileus virginianus) was startled from its hiding place – showing off the part of its anatomy for which the species is named and looking as if s/he was sporting a very large feather.

On one outing, Nick and I spotted a couple darling raccoon kits (Procyon lotor), who wasted no time scurrying for cover when they spotted us. 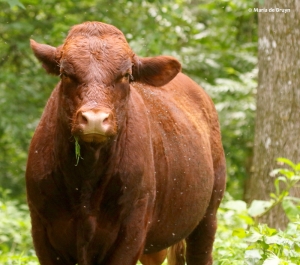 The farm is a great place to spend quality time outdoors. You can contact the farm management to schedule a visit and they will instruct on which fields and areas are open for visitation. And if you should wander by mistake into a field with some of the cattle, you needn’t worry as the Red Devons are likely to walk away or just watch you as they are a placid breed. I hope that Braeburn Farm becomes a popular birding and wildlife observation area so that we can continue enjoying visits there.

That’s a common question I get when I am out on one of my nature walks. Since I carry a camera with a large zoom lens and often a smaller camera, too, it’s obvious to passersby that I’m out observing nature. And I realize that when they ask the question, what they really want to know is whether I saw anything unusual or spectacular.

A recent walk at Sandy Creek Park in Durham, NC, was a case in point. I told one couple who posed the question that my most memorable sighting so far had been a male ebony jewelwing damselfly (Calopteryx maculata) – the iridescence of its body and wings in the sunlight was wonderful. They smiled a bit uncertainly and the lady of the pair admitted that she didn’t know anything about damselflies as they walked on. 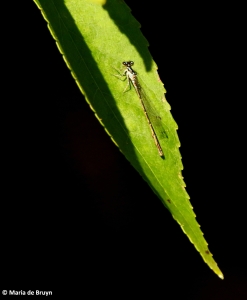 An hour or so later, another couple asked if I had “seen any good ones?” I repeated my delight in seeing the male damselfly, adding that the female is not as striking with her brown color and white spots. “Yes,” said the man, “that is often the case with other species. In our species, though, it’s the females who shine.” That may be the case some of the time, but my day was made by seeing a female damselfly that was a member of a new species for me – the fragile forktail (Ischnura posita).

My experience is that I find some beauty in almost all the wildlife I see (ticks and chiggers are an exception). So I want to share a few of those “good things” I saw at Sandy Creek Park last month in a two-part blog “tour”. In this first part, I’ll continue on with the insects.

Identifying dragonflies is not easy since the females and males can look quite different. The great blue skimmer (Libellula vibrans) provides an example – the male lives up to his name with a blue hue and large size, but the female shows off her beauty with a brown and yellow abdomen. 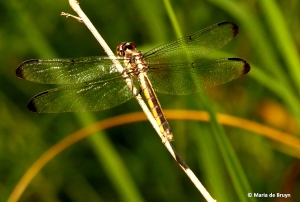 The Eastern pondhawk (Erythemis simplicicollis) has distinctively different appearances as a male and female. The adult male is a blue individual, sometimes with a bit of greenish tint; the female – and the immature males! – is brilliant with different shades of green. I remember being excited when I first spotted a female as their green color is so striking.

The blue dasher dragonfly (Pachydiplax longipennis) has some stripes, as do some of the bumble bees. The brown-belted bumble bee (Bombus griseocollis) lives up to its name with a brown stripe, while this American bumble bee (Bombus pensylvanicus) feeding on a trumpet vine (Campsis radicans) has white bands. Like honey bees, the latter bee has pollen baskets (corbicula) on its hind legs in which it stores pollen. I enjoyed watching this individual – s/he would dip down into the flower, back up a bit, and then plunge forward again, almost always keeping the pollen basket above the tip of the flower. 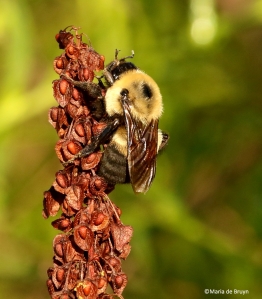 The pollen gatherers were numerous during both visits and willing to share the sources of their bounty – here you see a bumble bee (Bombus), syrphid fly (Toxomerus marginatus) and sweat bee (Halictus) feeding peacefully together on a coneflower (Echinacea).

The milkweed plants were attracting many species of pollinators; here an Eastern carpenter bee (Xylocopa virginica) was enjoying a meal.

While there were many, many bees the days of my visits, there were fewer butterflies but the common buckeye (Junonia coenia) was stunning!

The little wood satyr (Megisto cymela) and dun skipper (Euphyes vestris, to the lower right on the milkweed) were not as colorful, and some people might even call them dull, but they are still nice to see and the Eusarca moth (Eusarca confusaria) was also an evenly colored beauty. I had grown up thinking moths usually fly at night, attracted by lights so it still draws my attention when I see them in the daytime.

The broad-headed sharpshooter (Oncometopia orbona), a leaf hopper, and the spotted pink lady beetle (Coleomegilla maculata) are tiny but such colorful insects that close perusal of the vegetation helps you spot them (and presumably makes it easier for birds to see them, too?). 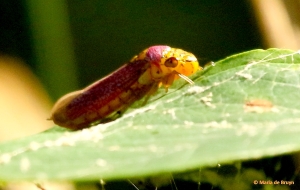 One beetle that we don’t really want to see is the emerald ash borer (Agrilus planipennis), an invasive species that came to the USA from Asia. The larvae of these beetles kill ash trees and the park administrators have hung a trap box for them to determine whether this species has reached the park.

Spotting mammals is not always easy at the park but one day fellow birder Jim was kind enough to alert me to an opossum (Didelphis virginiana) in a tree when we met on a walking path. He told me approximately where it was and I spotted that one and another in a nearby tree; I thought it might be a mother and grown offspring but that was a guess and I certainly couldn’t confirm it. As these are nocturnal animals, it was pretty cool for me to see two in broad daylight. The only marsupial found in the United States and Canada is a beneficial animal for us humans (and other wildlife) as they could eat up to 4000 ticks in a week!

One of the pair demonstrated that they can open their jaws widely – watching him/her slowly stretch that mouth offered me a surprise; I would think it couldn’t go any further and the animal continued to show that s/he could really please a dentist who would like lots of space to investigate those teeth. 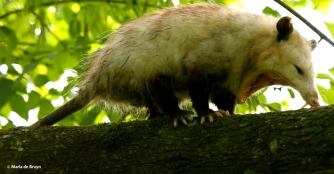 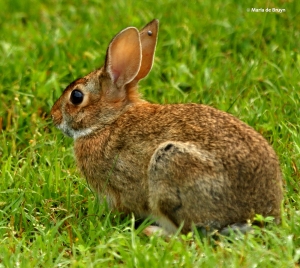 The Eastern cottontail rabbit (Sylvilagus floridanus) was not so lucky, carrying a fat tick in its ear. Too bad the opossums couldn’t come by and groom him/her and remove that pesky arachnid!

The park is not only attractive for the entomologists. Reptile enthusiasts can spot turtles fairly easily, especially in the spring when they are looking for places to lay their eggs. A large painted turtle was crossing a field looking for a spot, while an Eastern mud turtle (Kinosternon subrubrum) was trundling down a paved path one morning, not far from a pond which often has many painted turtles and red-eared sliders (Trachemys scripta elegans), like this one – who must have been a bit bothered by a bird feather caught in its shell. 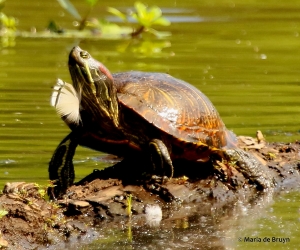 Which bird could it have been? I’m thinking a swallow – see part 2 of the tour for a view of the species and more of the wonderful biodiversity that can be seen in the park.