As mentioned in my last couple blogs, finches that usually reside in Canada and the northern USA have come south this year because of a dearth of food in their usual habitats. One of the factors contributing to the shortage is the varying cycles in which cones, seeds and fruit ripen among different tree species. 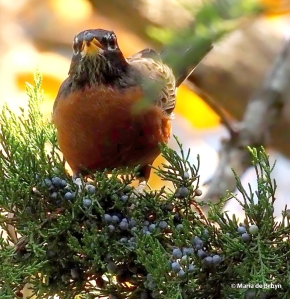 Not every tree produces an equal amount of seeds or berries every year; for example, this year my red cedars didn’t have very many juniper berries and by the time the cedar waxwings arrived, the American robins (Turdus migratorius) had already cleaned out the crop. Periodically, many of the different tree species up North have low seed production at the same time, so that birds who eat different kinds of crops all need to go elsewhere for sustenance in the winter. 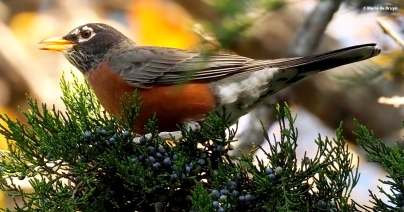 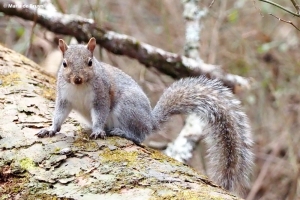 An interesting speculation from scientists in the Finch Research Network is that this synchronized low seed production evolved as a means of limiting food supplies for seed-eating (red) squirrels who could reproduce greatly and then wipe out all the seeds so that no new trees would grow. Jamie Cornelius, a researcher at Oregon State University, explained that “birds are mobile, and can find cone crops somewhere else,” while the sedentary squirrels then need to curtail their reproduction. In addition, some birds have evolved biological processes that make it easier for them to cope with food scarcity.

Red crossbills (Loxia curvirostra, called common crossbills in Europe) molt quite slowly, losing only a few feathers at one time, which makes it possible for them to fly elsewhere at any time in search of sustenance. They are normally not migratory but will travel for food, so in December 2020, local birders were quite excited when red crossbills were spotted at a state game lands in a neighboring county.

I was not enthusiastic about going to a hunting zone but had heard that the duck hunters were usually only busy early in the morning. So I donned my bright orange vest and ventured out on the two-mile walk to the spot where the crossbills had been seen. I waited around for a couple hours but they didn’t show, although I was looking for the reddish males and yellow females to make an appearance.

I didn’t give up. On my fourth visit to the game lands, I finally saw the crossbills (although I didn’t realize it immediately as they were so far away and my cataracts make seeing anything distinctly at a distance quite difficult. It was only after I enlarged one photo on the camera that I saw what they were! Remember, you can see a photo larger if you click on it and then back arrow to the blog). 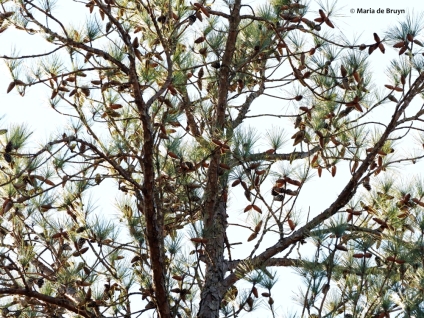 I first thought perhaps some grosbeaks had flown in, so I focused as well as I could on the distant trees and took photos. I was thrilled to see that I had finally photographed those elusive birds – giving me a “lifer” for 2021. 😊 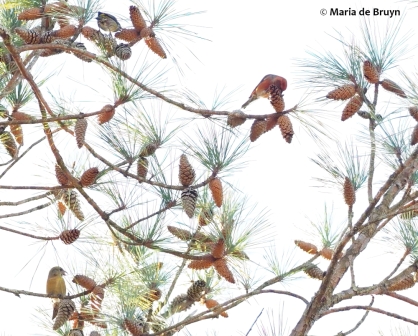 Sometimes it’s not easy to understand why a certain bird species has a particular common name. For example, many people would call a red-bellied woodpecker a red-headed woodpecker because the red on the head is much more noticeable than the hue on its belly. But the crossbills exemplify their common name quite accurately with their upper bills that curve down over their lower bills. A good view of their beak can be seen at the All About Birds website. 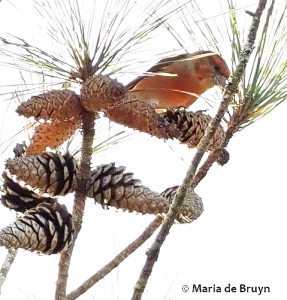 At first sight, one might think that this beak arrangement would make it difficult for them to eat, but this morphological adaptation means that they can extract seeds from conifer cones that are still closed, which other finches cannot do. Their bill structure makes it possible for them to hold onto a cone, pry it open with their beak and then take out the tightly-packed conifer seeds with their tongue. 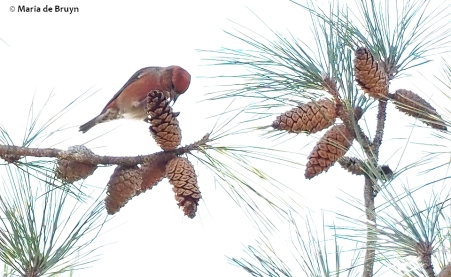 This specialized anatomical feature does restrict the crossbills’ diet somewhat. They do eat some other seeds, berries and insects from time to time and they also ingest grit and sand from time to time as having these substances in their crop helps them to digest the conifer seeds. 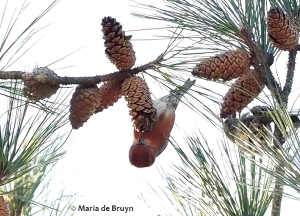 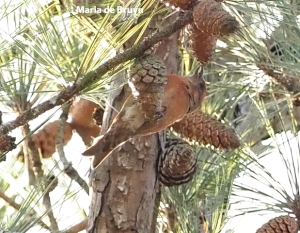 What also makes these finches very unusual is that there are at least six – and perhaps as many as 11 – sub-species in North America who differ in the size and shape of their beaks and the type of calls they make. Their unique vocalizations has led to each sub-group being designated as a “call type” and each type feeds on a different conifer species. They move about in groups and call to each other while flying from tree to tree. Some scientists think they may be communicating about the feeding possibilities in each cone-laden tree they pass! 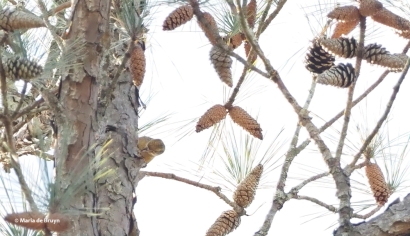 Another behavior that is distinctive for the red crossbills is that they breed at any time of the year, whenever sufficient food supplies are available. When a female and male form a breeding pair, they imitate one another’s flight calls so as to keep track of one another. 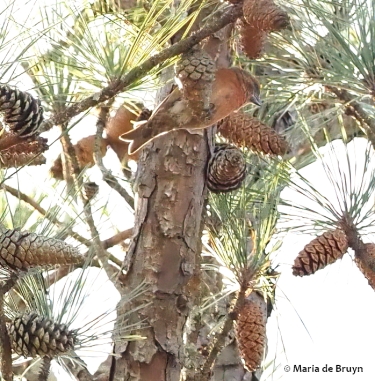 Unfortunately, unlike other irruption species such as evening grosbeaks and pine siskins, the red crossbills are rare visitors to bird feeders.

When I heard that crossbills had been seen at a game lands area much closer to my home, I made a couple more treks in hopes of spotting them. The first day I was incredibly lucky as I was the only person visiting the reserve and could walk at a leisurely pace in quiet fields except for the chittering of multiple bird species, including a hermit thrush. 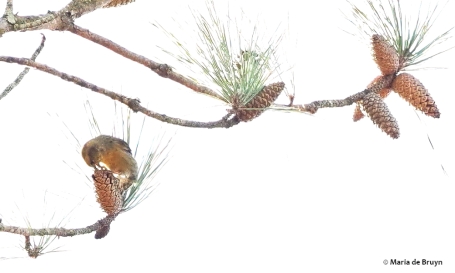 Unfortunately, I didn’t manage to see any crossbills flying overhead. Another visit to this nearby game land was shortened considerably when I discovered it was quite noisy with two hunters accompanied by a pack of baying hounds who were yowling very loudly and frequently. I high-tailed it out of the reserve and resolved to be happy with my one and only crossbill sighting (so far). Hopefully, one day I’ll be able to see them more closely – something to which I can look forward with great anticipation!