I thought I had published this blog in early February and just discovered that I had only saved a draft. Since we had snowflakes last night (in April!), I’m going to go ahead and post this now – a break in the series about Costa Rica! When the snow began falling during our day of one-foot accumulation, the feeders were inundated by some of the dark-colored bird species who tend to come in crowds. At first, they were peacefully sharing space. 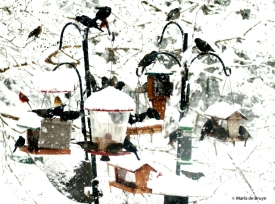 Although I sometimes have a couple dozen red-winged blackbirds (Agelaius phoeniceus) at the feeders, during the storm only one pair showed up for a brief visit and the other birds left them alone.

The mourning doves (Zenaida macroura) often share feeder space with other birds, including those that are smaller than they are.

The common grackles (Quiscalus quiscula) are known to other people as domineering birds at the feeder, but those in my yard have always been polite, even though they seem to have a permanent expression that expresses anger. 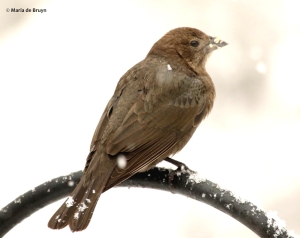 The brown-headed cowbirds (Molothrus ater) sometimes share space nicely and sometimes fuss at one another as they vie for a good perch. They don’t try to chase off other species though and are not apt to “yell” at other birds.

The birds who do “yell” are the European starlings (Sturnus vulgaris). Young ones yell at their parents after fledging, begging to be fed. Adults yell at each other when they are trying to all crowd together onto a feeder. And adults yell at other species to drive them away so they can have all the space for themselves. 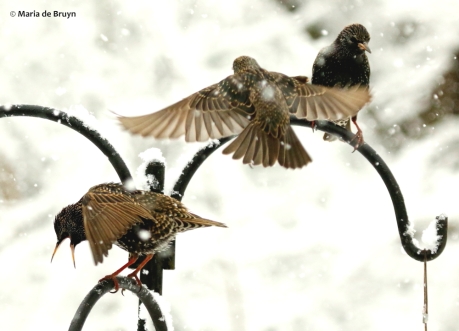 At my feeders, however, they have found their match in the male red-bellied woodpecker (Melanerpes carolinus). One day, I watched as they managed to intimidate him for a few minutes, but he then returned to the feeder and refused to give up. Now he is no longer frightened of them and stands his ground when a starling does its best to make him move. 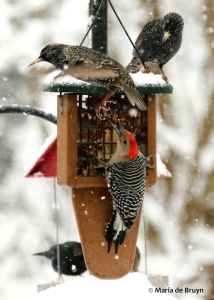 It turns out that studies have shown that the red-bellied woodpeckers are the birds most apt to resist attempts by other birds to displace them from feeders.

The red-bellied woodpecker also was not intimidated by me at one point. He doesn’t like it when he flies in and notices at the last moment that I am sitting or standing on the porch; often he will swerve away and wait for me to leave. During the snow storm, however, he decided to display his displeasure with my close presence, both from a frontal and dorsal view! 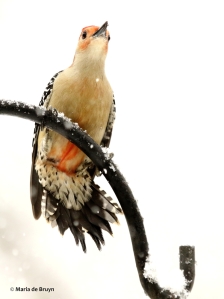 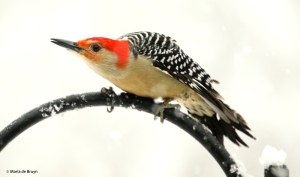 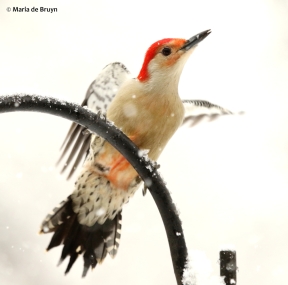 I guess that the little bird spats do make for sometimes more interesting birding observations. Seeing the tiny ruby-crowned kinglet (Regulus calendula) warning off a rival a few days before and after the snow melted did show off a gorgeous and brave little bird.

I’m looking forward to seeing what the springtime observations of animal behavior will reveal.

The other day as 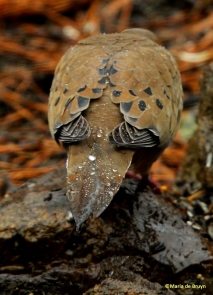 I was photographing birds at my feeders, I was struck by the beauty of this bird’s feathers as they lay across its back. The muted colors are wonderful and the scalloped-edge pattern is marvelous. It made me take a look at other birds’ feathers as seen from behind and how they vary in position and shape. I hope you enjoy this short tour and have some fun identifying the birds shown – many are very easy for experienced birders but perhaps some are not for beginning birdwatchers. The answers will be added to the blog next week.

So, we are focusing here on flight feathers, namely the remiges and rectrices. The remiges – or wing feathers – help the bird get lift when flying and support the bird during flight. The rectrices – tail feathers – give the bird stability and provide control.

The outer “vane” (part of the feather above the shaft) is narrower than the inner vane, so the wing feathers are asymmetrical. The tail feathers, on the other hand, are symmetrical in shape and pattern. The “primary” wing feathers are narrower and can be rotated individually, while the secondary remiges are shorter and lie together, even when the bird is flying.

In some species, the wing feathers may reveal a spot of color on the bird’s back when they are not folded completely over one another. 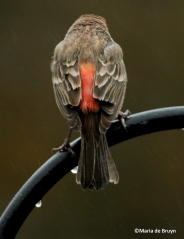 The feathers also serve other functions, such as keeping the bird warm and dry.

In some species, the males develop especially resplendent rectrices in th

Interestingly, the total weight of a bird’s feathers is about 2-3 times more than the weight of its bones!

One final quiz question – which bird has the fewest overall feathers and which species has the most?