A few times each day, I walk outside with my 18.5-year-old cat, Jonahay, who is deaf and has some other ailments. He used to be an indoor-outdoor cat until I decided that it was better not to let him roam the neighborhood. 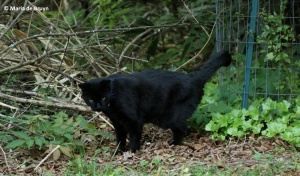 He rarely killed anything; he just wanted to mark his territory (which he still does) and occasionally he would catch moving things and bring them inside.

Thankfully, he didn’t bring me dead birds or animals; I did have to capture baby rabbits, chipmunks and a snake or two so they could go back outside. Now he just walks around and sleeps on the porch with me at his side; chipmunks and squirrels walk by him as they know he won’t chase them.

This afternoon as I was vacuuming, Jonahay came to ask for a walk, so I paused to take him outside for a few minutes. When we got to the side yard, I was surprised by a pair of house wrens (Troglodytes aedon) who were chittering vigorously and loudly in a cedar tree above me. They had not nested in my yard this year but do visit once in a while.

As I moved, they moved with me, continuously calling – their vocalization was very obviously directed at me, but I didn’t see any young ones anywhere so I wasn’t sure why they were so upset.

One of them – the male, I presume – only paused his calling for a few seconds when he groomed a little. I kept looking around for what might be upsetting them but didn’t see anything. Jonahay indicated we could go inside and the wrens had to let me leave. 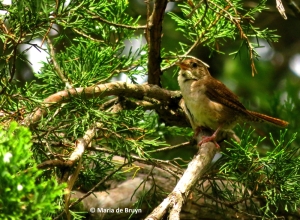 As I took the vacuum cleaner into the kitchen, which opens onto a screened-in porch, I suddenly noted a few tiny feathers on the floor. If the wrens hadn’t been “yelling” at me, I might have just glanced down and thought they were bits of cat toy or fluff. But now I was more alert!

I called my two other (indoor) cats and they didn’t come, which was suspicious. Even when they look at animals through the windows and screens, they will usually react if I speak to them. When I entered the laundry room on the other side of the kitchen, there were Moasi (shown left)  and Ogi (right), sitting on the washer and dryer watching a juvenile wren perched on the window sill!

I don’t know how the bird got into the house. Likely, it had been early in the morning when I opened the porch door for a few minutes as I put out bird food, but I had not seen the bird on the porch when I re-entered. During the morning and early afternoon, I hadn’t noticed the cats chasing anything either so the mystery remains. I hadn’t been outside much with all my chores so perhaps those parents had been calling for him all that time.

In any event, I shooed Moasi and Ogi out of the room and proceeded to open the window. The little wren jumped into a plastic container near the window and that enabled me to easily move him/her to the open window. The bird waited a minute (enabling me to quickly get his photo) and then flew out to freedom – and obviously to a pair of anxious but effectively protective parents!