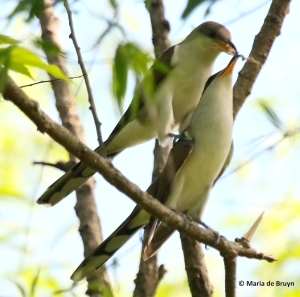 In the spring this year, I and another birder had the uncommon pleasure of seeing yellow-billed cuckoos (Coccyzus americanus) courting at Mason Farm Biological Reserve. These birds often stay high in trees, hidden by leaves, so it is always a treat to see one of them out in the open. Seeing two together, as the male tenderly offered his lady love a gift, was an unexpected pleasure. 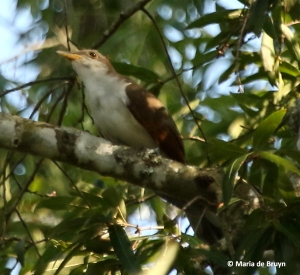 Also unexpected have been my more frequent sightings of cuckoos in my yard. Last year, I had caught a glimpse of one in a crepe myrtle tree; I thought it was a lucky fluke. This year, I began to see cuckoos in the large trees of my front yard more often, though frequently they were half hidden behind the leaves of the willow oak, red cedar and persimmon. I did hear their identifying calls so I knew when they were around but not in sight.

Then, this past Sunday afternoon as I sat on my front porch photographing birds and insects visiting my flower garden, I suddenly caught sight of a cuckoo flapping about on a makeshift trellis I had arranged around an oak stump where I hope Carolina jasmine and other climbing vines will create a pleasing area.

The spot is popular with chipmunks and Eastern gray squirrels (Sciurus carolinensis), as well as many smaller birds like Renee, one of the banded Carolina wrens (Thryothorus ludovicianus) living in my yard. 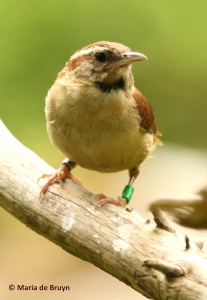 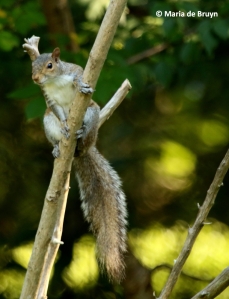 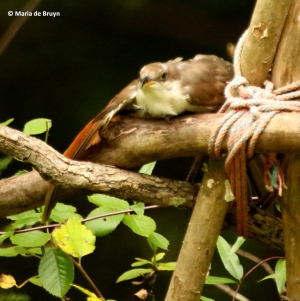 But to see a large cuckoo sprawled on the branches was unexpected and I feared that it had an injured wing after escaping from a hawk attack. I took a few quick photos. Then I approached to get a better look — the bird tried to flutter away but didn’t get far.

I ran inside to get a box and the phone number of a local wildlife rehabilitator. I left a message and managed to get the bird in the box, to which it protested vigorously. When I closed the top, it calmed down and then the rehabilitator returned my call stating that perhaps it was a fledgling – I said it looked like the wing was injured so she asked me to take a photo of it.

When she saw my point-and-shoot camera photo, she said it wasn’t clear whether it was a juvenile or not and asked me to photograph the beak. Young birds have a yellow or bright “lining” where the beak meets the face. This area is called the gape flange and in most birds, the color disappears as they age and the beak becomes firmer. 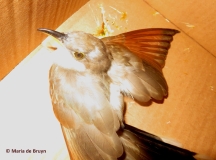 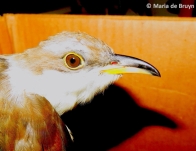 With a slightly better photo of the bird’s head and beak, the rehabilitator informed me that this was indeed a young bird. She also told me that the bird probably was feigning a wing injury to get the parents to come back more quickly with food! On her recommendation, I put the bird back on a stump by the makeshift lattice. 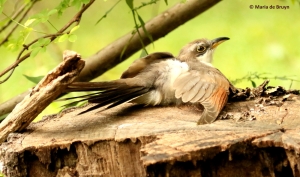 I knew about killdeer adults pretending to have a broken wing and dragging it on the ground to lead predators away from a nesting area. The yellow-billed cuckoo adults will also do this distraction display.

But I had not heard of fledglings engaging in this ruse. The rehabilitator said she had known of crow fledglings that kept this up a couple days, although she didn’t realize cuckoos would do this as she doesn’t get many calls about this species. But, she commented, “birds aren’t stupid; a free meal is a free meal.” 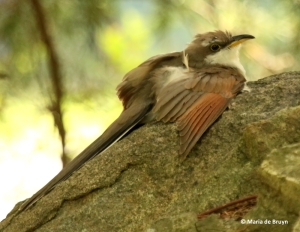 I kept checking on the bird and it stayed on the stump quite a while. Then it hopped down into the leaf litter and made its way over to some large rocks under a cedar tree with low-hanging branches. First, the cuckoo just hung out on the rock. And all this time, it kept that wing stretched out.

Then the bird lunged upward to get onto the branch. At this point, I seriously wondered whether it wasn’t injured after all, perhaps having fallen out of the nest and hurting its wing when it landed. It got a purchase on the limb and continued to keep its wing out. Then it fell off the branch. 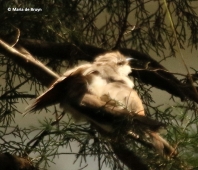 After a short rest on the rock, the fledgling jumped up on to the branch again and stayed there. I went inside and returned periodically to check on him/her. About 3.5 hours from time I first saw him/her, the bird was still resting on the branch with the wing out. S/he was no longer wary when I came to look but viewed me calmly. 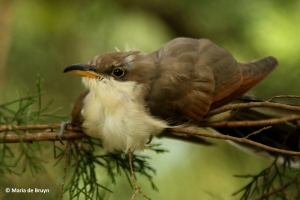 About 30 minutes later, I went back outside for another check and found the bird on the branch, but now with its wings both folded in towards its body. I was really glad that it appeared to be ok and hoped the parents would come for it. I had heard them calling earlier in the afternoon but never saw them approach the offspring, though this may have happened when I went inside for brief periods. And when I finally looked at the first photos I had shot in quick succession, I saw a couple where the bird had drawn in both wings to hop about, only to stretch out its wing later again. 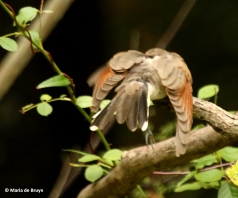 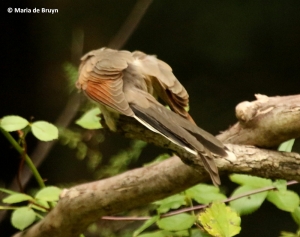 When it was almost time for me to leave for a theater engagement with a friend, I went back out to check one more time and discovered my cuckoo friend was gone. I examined the cedar tree to see if it was further up, as well as the trees and ground all around, and could find no sign of him/her. I hoped that s/he finally decided to give up the display and just flew to a better place. I did check the area the next two days but did not see the bird again.

Then, this morning, a distressing finding started off my day. When I went outside, a neighbor boy was staring at the ground in front of my street-side willow oak. When I got there, the cuckoo lay dead at the street edge. He said he had seen the bird yesterday sitting on the road “with a broken wing”. I wish I had seen it – I don’t know if the bird had really been injured after all, was feigning an injury and then fell prey to a neighbor’s cat (which is what I think happened as its underside looked like it might have been in a cat’s mouth), or if something else occurred. In any event, it was such a sad discovery. 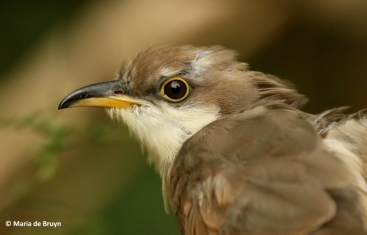 I buried the cuckoo while regretting how short its life was. I’m glad I don’t let my cats roam about anymore and I wish neighbors would also keep their felines inside, even though I know that birds might fall prey to a hawk or die because of a disease. But I wish I’d been able to help this beautiful young bird. My emotions tell me the cuckoos won’t return but my mind says they won’t avoid the yard because they lost an offspring. Time will tell.

2 thoughts on “A cuckoo causing confusion and consternation, delight and distress….”