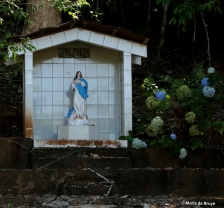 After fully experiencing the “honey dew” (another name for cicada urine), we set off for the next university site, an area where students learn about planting. A statue of the Virgin Mary welcomed visitors and we admired some of the beautiful plantings and their seeds that were attracting plenty of insects. 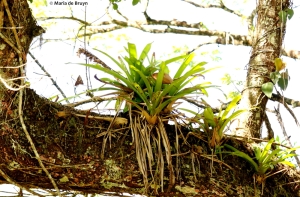 We then left to make a quick stop at a park called Los Cusingos, that we would visit at length later; this was just a quick bathroom break before we took to the road again. My photo of the gray-headed tanager was not that great but you can see how beautiful the red passionflower (Passiflora vitifolia) at the entrance was.

As we drove to a place called Las Nubes, we passed private homes with their filled metal framework trash bins in front, a cemetery and plenty of banana plants. 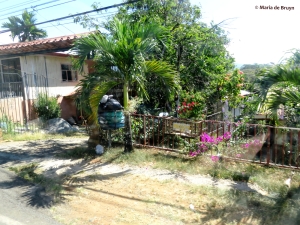 One of our group members stepped in an anthill when trying to avoid puddles and traffic, which led to some stinging bites. In the meantime, others were trying to see various species of birds that were staying low in the vegetation along the road. I spotted a rather large wasp nest in a nearby tree, likely of the Synoeca septentrionalis species. 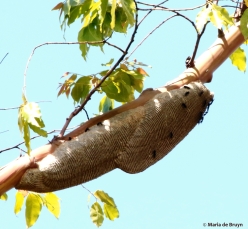 At some distance, there was a yellow-headed caracara (Milvago chimachima) sitting on a branch. These raptors are about 16-18 inches in length (41-46 cm) and part of their diet is carrion. They also eat reptiles, amphibians and other small birds, while avoiding birds as food. They take ticks off cattle as well, which gives them a thumbs up from me – any bird that eats ticks is a friend. 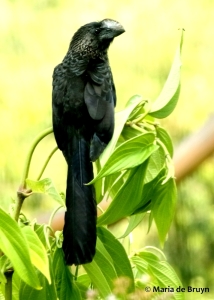 A gorgeous smooth-billed ani (Crotophaga ani) was sitting calmly as we milled around in the road. Some people might find this bird homely, but I think it is quite handsome despite a somewhat bulbous beak. They, too, are on my “good birds” list as they sometimes eat ticks and other parasites off of grazing animals. Another nice characteristic is their communal child-raising strategy – several pairs cooperate to build a nest together, in which several females than lay their eggs. They share the incubation and feeding of nestlings – hippies of the bird world! 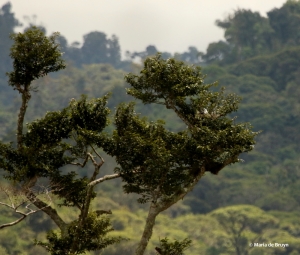 We traveled on and the views along the road were beautiful, with the mountains and valleys in the distance and then we caught sight of some swallow-tailed kites (Elanoides forficatus) soaring over the nearest valley. We saw one land in a tree and it turned out that they were building a nest there. In the photo, you can see a small white patch on the right-hand side of the tree, which is the female kite on the nest.

As we waited patiently, a few kites began flying overhead; one with nesting material clutched in its claws. 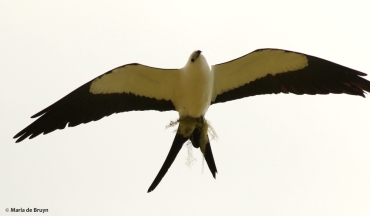 They soared and swooped, giving us delightful views of their flight and then one came by with a meal that it had caught – a poor little chameleon or lizard. 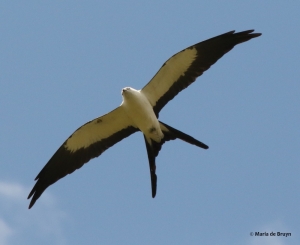 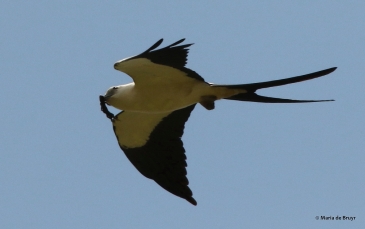 We admired the Talamanca mountain range called La Amistad (Friendship), which separates Costa Rica from Panama. Starting in 1979, these two countries’ governments began a process to conserve the entire range, which is home to four indigenous groups of humans, 600 avian species, 215 mammal species, 250 species of amphibians and reptiles, 115 species of fish and some 10,000 flowering plants! As UNESCO has noted, this is: “one of the very few transboundary World Heritage properties, an excellent intergovernmental framework for coordinated and cooperative management and conservation.”

After a nice lunch, we continued visiting other sites, including one near a Canadian project. That afternoon, I saw my first trogon species – the gartered trogon (Trogon caligatus), another handsome bird to be sure.

While the rest of the group followed Steve’s instructions for sighting some birds hiding in underbrush on a slope, fellow traveler Janet and I watched some leaf-cutter ants (Atta cephalotes) at their labors. Sometimes, I was just not tall enough to see over shrubs to locate a bird and I love all wildlife anyway, so watching the ants in their industrious endeavor was fun. 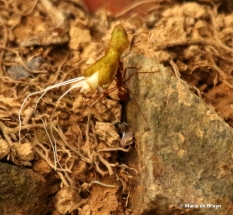 On our way back to the lodge for supper, we passed small roadside stores and Steve spotted a fork-tailed flycatcher (Tyrannus savanna) for us. 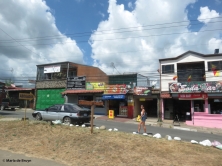 Back at Talari, I did some sightseeing from the balcony of my room, spotting a lengthy and messy-looking flycatcher nest, a variegated squirrel (Sciurus variegatoides) traversing the tree canopy and a pair of palm tanagers (Thraupis palmarum), who were tending an offspring. 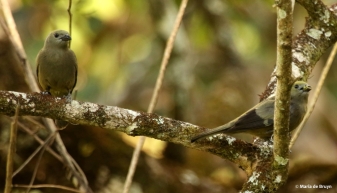 At first, I thought the fledged bird was a different species as it sat under a leafy canopy, but later I saw the parents with it. Then it surprised Janet, who was staying next door – she called me over to see the fledgling who had flown into her room and was sitting in the middle of the floor. 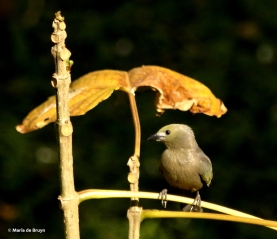 She also had two nests under the roof of her balcony, one of which definitely belonged to a clay-colored thrush (Turdus grayi). 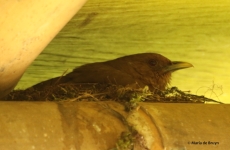 After admiring one of the neighbors’ cows and social flycatcher (Myiozetetes similis), I caught sight of a quiet beauty sitting on a branch in front of my room. 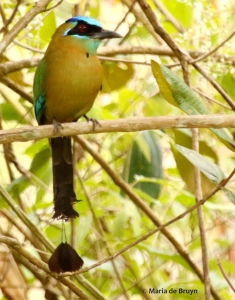 The Lesson’s motmot (Momotus lessonii), also known as the blue-diademed motmot, has a bright red eye and beautiful tail with what some birding sites call a “raquet tip”.

As we set off for the dining area, we were treated to a visit from a streaked flycatcher (Myiodynastes maculatus), quite a good-looking bird with its heavily streaked back, breast and face. 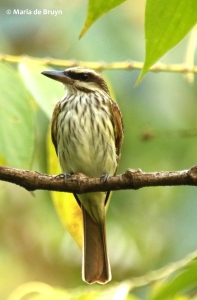 As we passed through some vegetation before dinner, I saw a gorgeous flowering banana as a blue-feathered and red-legged honeycreeper (Cyanerpes cyaneus) flew high overhead. 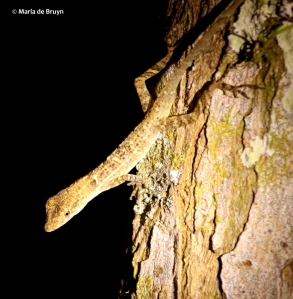 Even though we often were looking for birds in dark and leafy/shady areas, I avoided using a flash but when I saw the lemur anole (Norops lemurinus) on a tree, I gave in so that I coul d get a photo.

As dusk came on and we looked out from the dining area, we got to see some fiery-billed aracaris (Pteroglossus frantzii) in the distance. 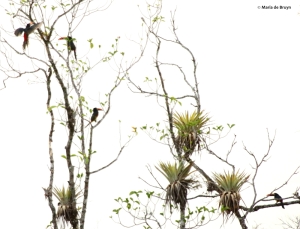 While some others in our group got to see one close up, that was not my fate, but the next morning, the aracaris were in a little better light though still far away, allowing me to get a bit better photos.

We ended our second night at Talari Lodge with an owling outing – Steve managed to draw in a tropical screech owl (Megascops choliba) by playing its call on his phone. The owl who came had had an injury to one eye, with a pupil that would no longer dilate but s/he seemed to be flying fine and looked healthy. That bird gave us a nice long look at its beautiful self so that we retired for the night with a feeling of birding satisfaction! 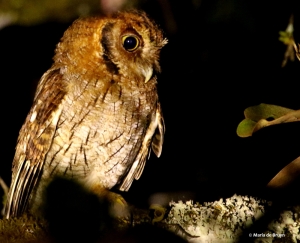 2 thoughts on “Costa Rican rambles 5B: the Talari Mountain Lodge and environs”